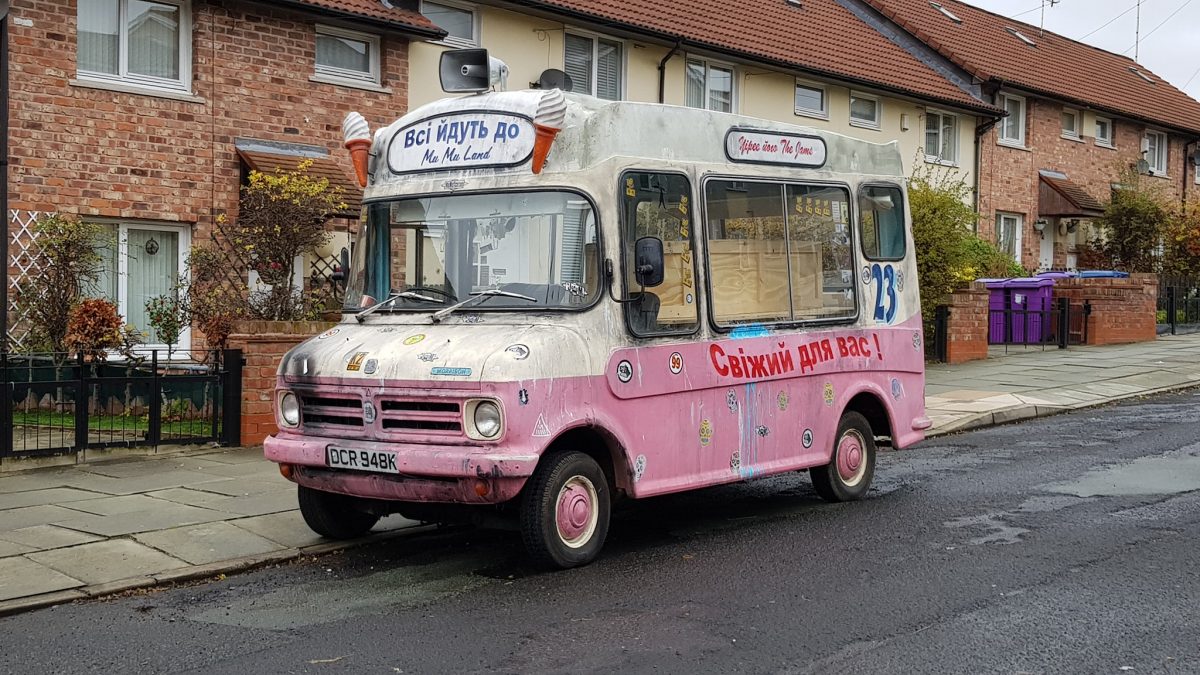 As Jimmy Cauty and Bill Drummond bring K2 Plant Hire to celebrate Toxteth Day Of The Dead in L8, Getintothis’ Gary Aster joins the parade winding its way towards the Cathedral and the Peoples Pyramid.

I arrive at the Florrie shortly after midday to find it’s locked up at the front but a flurry of activity around the back, things are being loaded into the back of a mid-sized removal van with K2 Plant Hire logos emblazoned on its side as, nearby, banners similarly decorated are unfurled.

In the midst of the strangeness stand Jimmy Cauty and Bill Drummond.

I reflect on how odd this actually is. In my late teens, these two men were almost like mythical figures to me. For years I read about their exploits in the pages of the music press, they seemed like no other band I had ever heard of and did things that no other band would ever do.

They were often hilarious but also mysterious, rebellious and unpredictable.

Yet, apart from me, no one else seems to be paying them any attention on this cold Saturday afternoon in November. To be fair that might partly be because there is plenty of folk here in more eye-catching attire.

Because it’s Toxteth Day of the Dead once more, a newly established annual tradition that has clearly grown larger since its inception last year.

There are people with expertly-applied skull and skeletal make-up, folks in outlandish and anarchic outfits and other assorted misfits, bohemians and ne’er do-wells.

Collectively, they resemble a carnivalesque parade like no other you’ve ever seen.

Join us as we recount the K2 Plan Hire Journey

So perhaps it’s little wonder that no one is troubling Bill Drummond for a selfie or asking Jimmy Cauty to sign their copy of The White Room when there is so much else to gawp at.

Throughout the day’s proceedings they remain peripheral figures, present but never centre stage, often overlooked or ignored, they seem to be delegating more and more in an effort to shift the focus away from themselves and onto the Pyramid and its associated rituals.

Liverpool Arts Lab have really stepped up to the plate this year and deserve much credit.

In many respects, this was their triumph, undoubtedly more people were drawn to the event this year and plenty of those swelling the ranks of the procession seemed to be locals.

I recognised Toxteth resident and nine-year-old Sophie from Paul Duane’s ‘What Time is Death’, a documentary film about the Jams’ return and the People’s Pyramid.

Sophie is, I believe, the youngest person so far to have signed up for Mumufication. She was walking with her dad and baby brother in his pram to accompany her.

We begin with a welcome from the day’s real star and master of ceremonies,

Toxteth local legend Tom Calderbank, Tocky Tom, is a larger than life character with an infectiously enthusiastic and good-natured humour which shines through his every pronouncement.

It is hard to imagine today happening without his tireless efforts on the procession, he’s the man of the match today, without a doubt. He leads us in song, offers chants and refrains, waxes lyrical and recites poetry.

Life and Death in the streets of Liverpool. pic.twitter.com/VsoDNQiYf9

He gives instructions, words of advice, words of wisdom and comfort. Leading a procession like this must be like herding cats and yet he manages it, and improvises and repairs when things go astray.

Before things get underway, Tom is keen to ensure that everyone feels welcome and comfortable and makes a concerted effort to allay any lingering anxieties.

Quite openly, he explains that a participant last year had left feeling unhappy with proceedings, and everyone was eager to ensure that this didn’t happen again.

This sets the tone for the day nicely, as does the brief poetry recital which follows and then we’re on our way.

As we pass through the gates I notice Bill Drummond and Jimmy Cauty standing at the exit handing out umbrellas to anyone who wants one. Rain was forecast for the day but thankfully failed to materialise.

Life and Death – two sides of the same door, swaying back and forth in the highest art ritual of our times. Treasure in the big farewell. Beautiful. Thanks @GreenFuneralCo Tx#ToxtethDayOfTheDead #Liverpool #PeoplePyramid pic.twitter.com/g4KIeEjoJQ

The procession takes a new and winding route through some of the streets of Toxteth, stopping by to pay tribute to both the living and the dead at appropriate points, honouring those who have made a positive impact on the lives of local people in ways that may have gone unreported or previously overlooked, via a credit union, or a community garden, cafe or recreational space.

Of course, there is plenty of good-natured hocus pocus and mucking about, The Wise Women of Toxteth, for example, who appear to be witches of some sort, lead us in what at first appears to be some sort of pagan incantation, but which turns out merely to be ring o’ ring o’ roses. 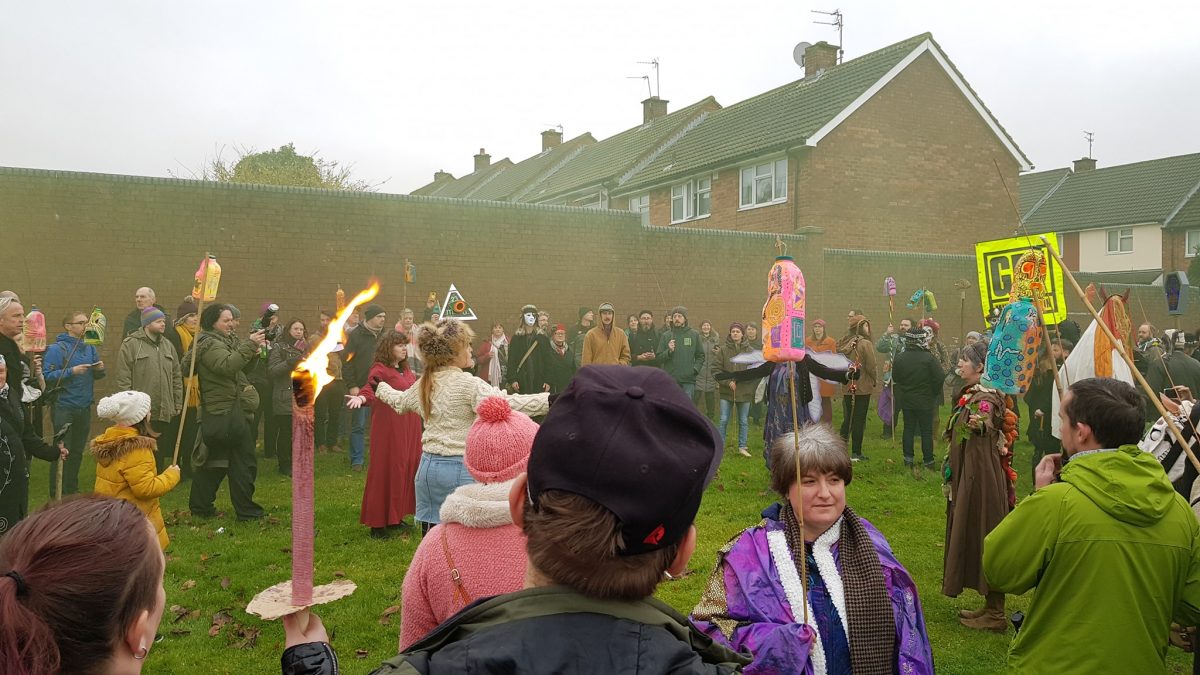 Then there is the Summoning of Gimpo, former KLF roadie and now the man tasked with dragging the (not inconsiderable) foundation stone of the People’s Pyramid along the route of the procession.

He’s lurking around a corner but will appear if we all sing G.I.M.P.O. to the tune of D.I.S.C.O. by Ottawan.

Next, we are all invited to think of the name of our “ghost”, a significant relative or friend we have lost, who will accompany us for the rest of the procession, we are then each given a ribbon on which to write their names, and pin them on.

There are many songs along the way for different reasons.

At one point we gently sing The Beatles’ ‘Blackbird’ in memory of Julie Christian, a Paul McCartney fan who died tragically young having missed the chance to see Macca in concert in Liverpool because she could not afford a ticket.

It’s a touching moment and some of those present are visibly overcome with emotion, seeds are then planted at a spot close to where she once lived and we move on.

On the corner of Merlin Street, poet Eric Maddern dazzles with a recital in the words of that ancient wizard, and not unreasonably, people stand in their front doorways.

Many appear perplexed but also amused and even delighted at the unexpected appearance of this mad and noisy parade which suddenly falls silent to hear poetry, delivered brilliantly I must say, in the streets of Toxteth on a Saturday afternoon.

Later we are serenaded not once but twice by the beautiful voices of the Hope Street Choir. In between their songs, there’s time to pay tribute to Liverpool-born John Archer, who in 1913 became the first black mayor in London, and who gives his name to a community centre on Windsor Street.

It’s a long and winding route with many tributes paid along the way to both well-known and relatively anonymous figures, with a notable (and commendable) effort made to bring to greater prominence some of those who achieved things for historically marginalised minority groups.

A deadline and the need to keep this piece within a realistic word count regrettably prevents me from naming them all here.

One especially touching moment was the stop we made outside a flat that was once shared by John Lennon and Stuart Sutcliffe. ‘Across the Universe’ is a song that never fails to hit me in the feels, so to speak.

To sing it with hundreds of others, just as night had fallen on this day and in this context was very, very moving and you’ll just have to excuse my momentary sentimentality.

From here it was just a short walk to our final destination and, as instructed, we completed the rest of the procession in silence. There’s something oddly affecting about walking along in silence, even for just a few minutes, with several hundred other people.

It worked its magic on us.

We descended down the winding path leading to St James’ Cemetery at the foundations of Liverpool’s Anglican Cathedral, for the more formal and ceremonial part of the proceedings, Mumufication; the laying of further Bricks of Mu on to the foundation stone of the People’s Pyramid.

A lone saxophone playing a haunting lament is the only sound to be heard.

Clare and Ru Callender of the Green Funeral company are here to officiate.

Behind them, an extended cast of Liverpool Arts Lab forms an elaborate human backdrop as ornate as any church. In front of them, with solemn expression is Daisy Eris Campbell, here to do the actual bricklaying. 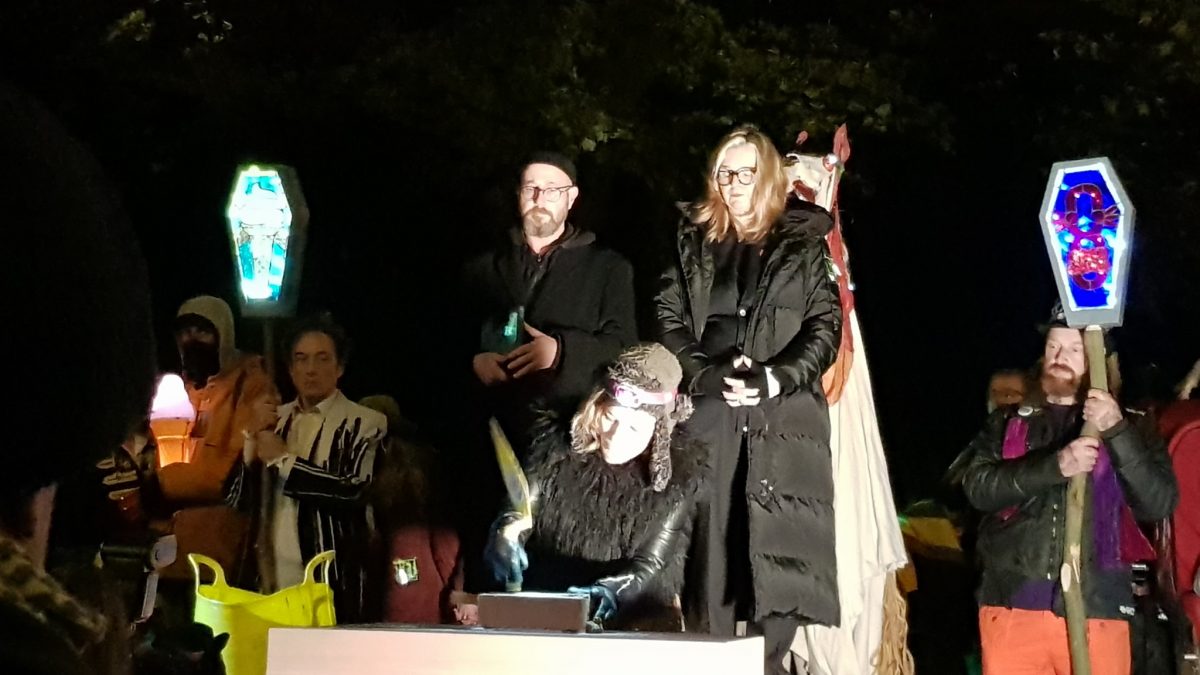 Over to the side, away from the main area lurks the Ice Cream Van, almost unnoticed. Bill Drummond and Jimmy Cauty have once again donned their horned helmets. But they do little more than simply hand over the bricks. As they do so, a few bars of O Sole Mio slowly chimes out from the ice cream van.

As each brick is laid a single bell rings. We hear it eight times in all. Clare Callender recites the names of the nine individuals whose ashes now form part of this, as yet, incomplete pyramid.

Finally, we are led in song as Hymn sheets are quickly passed around with the words to K Cera Cera (War is Over) and it was left to Pete Wylie, he of The Mighty Wah, of course, to lead that final song.

It is difficult to convey in plain words what this experience was like.

I can’t begin to explain how intoxicating it is to be in Liverpool, how they treat us like rockstars and the supermagical happenings that fall at our feet. It’s almost too much. Anyway I will be posting pictures of the Toxteth Day of the Dead and gushing so forgive me. pic.twitter.com/rtbj4cIL7I

I’ve just spent ten minutes staring at an empty space trying and failing to find those words. Looking back over what I’ve written, I think there are a lot of adjectives that I might have used and haven’t so far, so I’m just going list some of those I think.

Beautiful, mysterious, amusing, informative, moving, optimistic, inclusive, irreverent, solemn, cheerful, absurd, surreal, all-too-real. If some of those words seem inconsistent or incompatible, then I can only resort to calling upon the Jams’ own oft-muttered motto, ‘Embrace the contradictions’.

The night went on for others of course, but alas for most of the day I had been suffering from a bad cold and an aching back that was giving me quite a bit of grief.

So heading for home I got in a taxi and the driver asked me what I’d been doing.

I tried to explain, but well, you can imagine my difficulty.