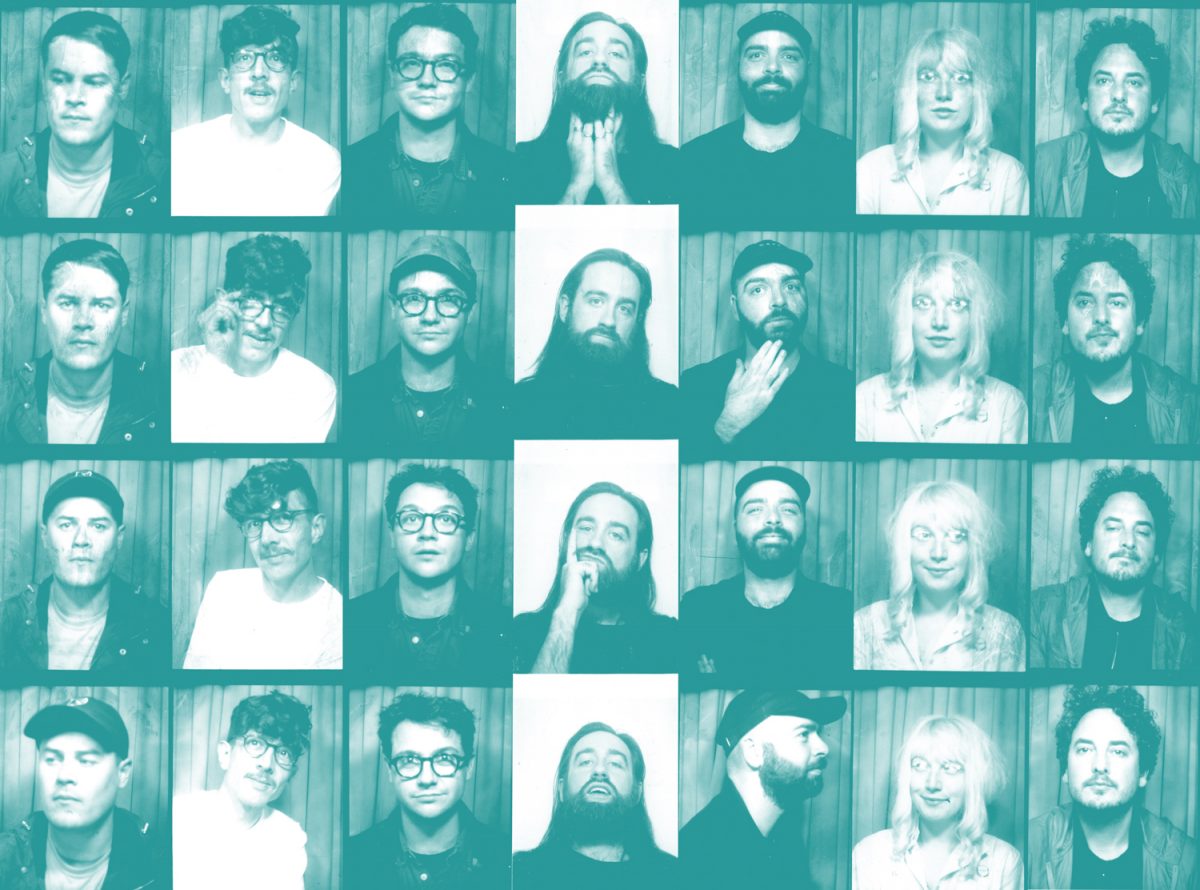 The glittering punk-disco ball of a tune was followed a couple of weeks later by Low Light.

Then came an under the radar show in the dark concrete basement of Soup Kitchen in Manchester’s Northern Quarter.

The reason for a such gradual, low key introduction  – No Dither stayed in the relative safety of Bandcamp at first – was in some part at least one can’t help suspect, due to Holodrum emerging from the ashes of the much loved outfit Hookworms, after they abruptly split 12 months ago.

‘One of our friends said the other day…. why would you ever be a band with that many people, it’s never gonna work,’ laughs Matthew about the now seven strong outfit.

‘We struggle to find a van to fit us all in. I think it’ll cause some logistical issues down the road!’

It’s exceptional news that something good came out of the sudden demise of a popular band everybody liked.  Matthew doesn’t want to talk about the Hookworms split understandably enough, but reveals the four members initially took a four month break.

‘It wasn’t that we lost interest in music but it kind of took the back seat a little bit. Real life happens.’

He pauses and takes a breath before continuing to speak.

‘A lot of heavy shit went down (but)…. it’d be a massive shame for us never to play music together because we had something quite good going on. We were together for a long time and there’s chemistry and understanding between us.

There was a lot of questions about whether we should play together again, whether it’d give people the wrong idea or whatever…. we’ve been super worried if anyone would react negatively to us doing a band again. There’s no reason why anyone would react negatively you just get it in your head. It’s negative by association. We were worried the Hookworms name maybe tarnished anything that we’d ever do again.’

The new music carries the old outfit’s DNA for sure, but can I call No Dither and Low Light dance floor bangers?

Holodrum, what’s been heard of them so far, are infectiously danceable.  The songs they have in the bag – six or seven in all make up their live set – reflect that weird in-between period in New York at the end of the 70s and beginning of the 80s.

There was a sense of hedonism during that decade shift, post-punk, new wave and disco colliding.

Holodrum’s musical seeds were sewn in Hookworms’ final album Microshift, namely the songs Negative Space and Each Time We Pass. The shift came courtesy of the synths brought into the studio by a Matthew Benn getting bored of playing bass by this point.

‘In my head I wanted Hookworms to go towards like party band style, where it’s loud and intense like Hookworms always was, but more fun. I felt Hookworms never had a fun vibe it always felt a quite serious band. I started inching towards playing less bass and playing more synths. Wanting more keyboards and saxophone which Chris plays now, stuff like that. I think, one member of the band leaving the whole dynamic shifts more than you could imagine. Which is quite interesting.’

‘We were talking about the mutant disco bands in New York in the early 80s like Konk, Talking Heads, Liquid Liquid. That’s what I wanted Hookworms to move towards, more we all listen to a lot of electronic music, disco, house music I wanted to take the sound we had…and make it more positive and banging. More club ready, dancefloor ready, to make people dance and move and have fun.’

‘Party music, but made with guitars and live drums and guitars rather than a laptop.’

Did you find starting this new project freeing?

‘Musically, in a way. Yeah, there was a lot of things at least I personally wanted to try with Hookworms that never came to fruition so it’s been cool to do stuff like that. But it wasn’t freeing mentally. I think at least for us four in that way it was quite scary as opposed to freeing but musically it’s been nice to do lots of different things.  As soon as new people got involved it completely changes shape. I’m hesitant to say it was freeing but it’s been a very lovely experience doing a new band with friends.’

The four rehearsed together for a good while before being joined by Chris, a collaborator on Microshift and who Matthew plays with in the XAM Duo project. After practising as a five piece Steve joined, playing percussion.

They stayed at six members for another period but found themselves stuck for a singer.

‘None of us were brave enough to try singing…’

Emily was ‘massively’ up for it when asked, and before she’d even come to a practice she was demoing vocals and had a bunch of ideas of her own to bring to the table.

‘The more people we added the more interesting it got.’

It was Emily who came up with the name Holodrum, representing sound and vision, the drum and percussion then the holo as in hologram or holographic. It’s a very democractic project all told, everyone chipping in, writing, bringing in ideas.

Matthew has taken over the recording and mixing side of things.

‘It’s super nice,’ he says of the set up.  ‘Back to how it was when Hookworms first started, a complete democracy.

With this new band no one knew it existed until a month or two ago. It’s quite nice to take our time, no pressure to do anything.’

It feels to me as an outsider, like Holodrum is the most natural of progressions.

‘Yeah I think so, it’s  four of the (old) band so we already had an understanding of each other. We’ve basically carried over the same set up we had in terms of what we play. The electronic set up I have with this band is what I had when Hookworms ended. It’s picking up where we left off but hopefully with a slightly different vibe, a different twist.’

The first show and the forthcoming one on home turf at The Brudenell in Leeds are safety nets of sorts, familiar places Hookworms played in the early days.  The Soup Kitchen night went down a storm, despite some anxieties.

‘You start second guessing yourself when it’s a first gig for a new band, if anyone’s going to come or anyone’s like it because while we’ve been working on these songs the last 6 months no one’s heard them. It might be dreadful, do you know what I mean? But it was fun night. It went down like I wanted to, if you know what I mean?

Holodrum are different with that party vibe, new members, and a new vision with more control. It’s interesting you use your own names now, no more initials. It always felt like you were spies or undercover?

‘That was always an awkward thing with the initials. Something that we did in the very early days of Hookworms and instantly regretted but backed ourselves into a corner with it, it felt like we had to keep going with it. It’s nice to be people again.’

Holodrum play The Brudenell in Leeds on 5 December