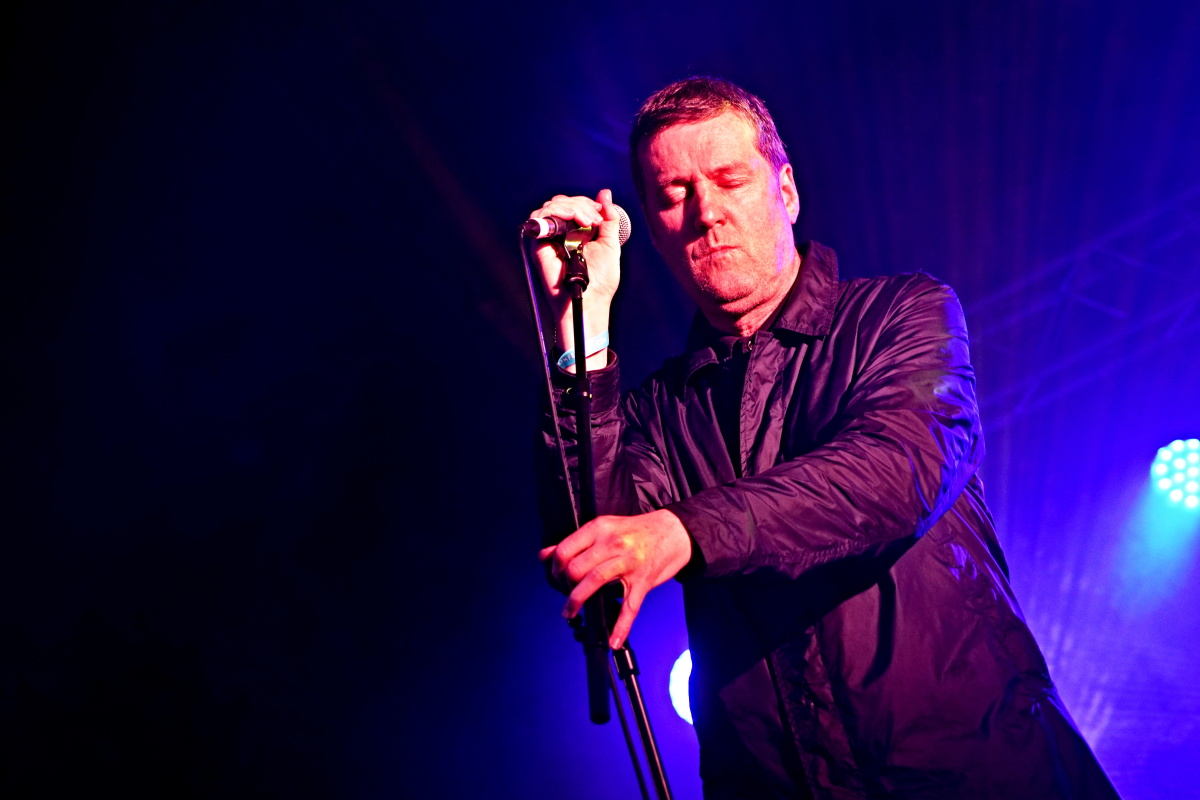 It’s not easy being a support band, as Getintothis’ Jane Davies found out talking to The Farm, Red Rum Club and The Coral.

In today’s music world, meteoric rises of support bands are few and far between.

Granted there have been some supports that have rapidly gone on to surpass their headliners in the past; Suede supported Kingmaker and Jimi Hendrix once opened for the Monkees.

Openers can be on stage sometimes up to two hours before the main act take to the stage doing a hard slog in front of a potentially half empty venue.

Suffice to say, if fans of the headliner arrive early, it is usually in order to get a few drinks down them before the bar is too busy or to secure a coveted place at the front.

This leaves a sizeable proportion of the early doors contingent as being presumably fans, friends or family of the support.

Niamh Rowe from The Sundowners told us after a support slot a few weeks ago that she did not mind being first on at gigs “before people have had too much to drink”.

We can forgive people for their over indulgences, but when it develops into loud conversations during an artist’s set, patience can wear thin, again, artists have seen this too often.

A case in point being Anna Mae at this year’s Skeleton Coast Festival where constant chatter irritated not only the artist, but other members of the audience, one bold enough to tell the offenders to be quiet. 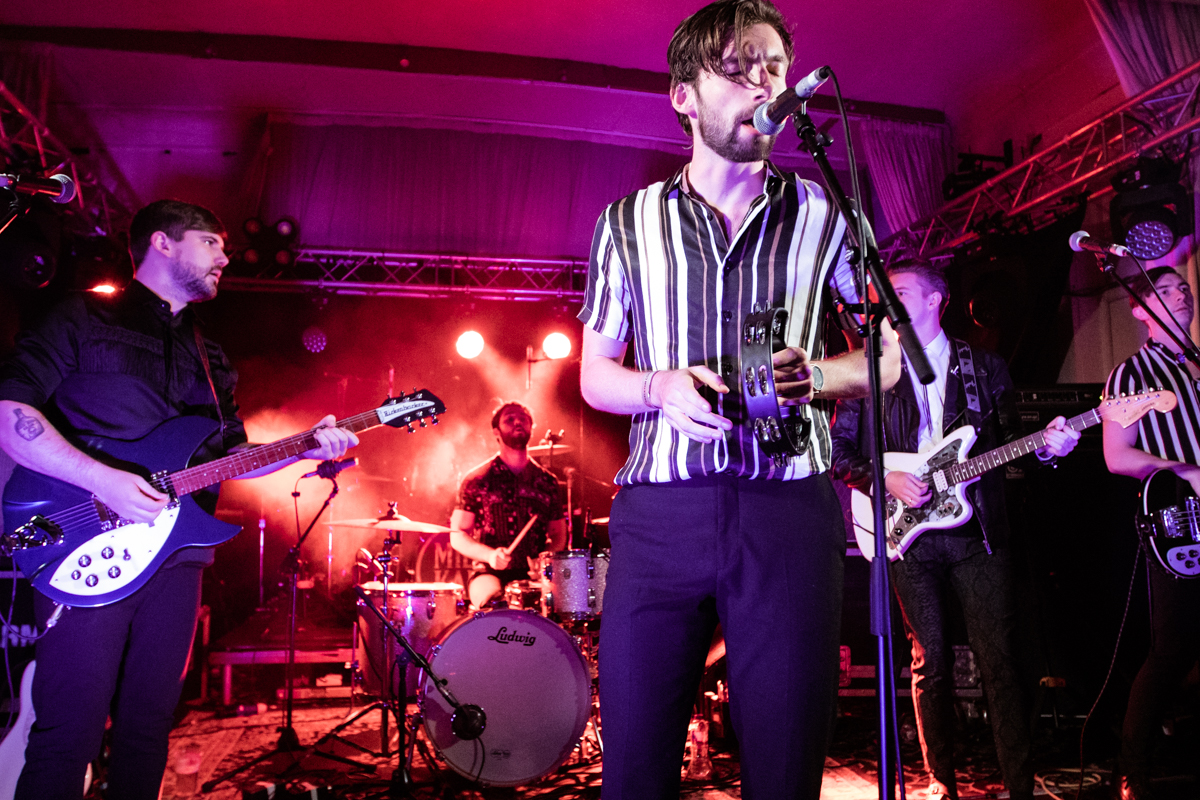 As Red Rum Club explain: “When you are starting out they can be a hard one to crack as usually there’s an expectation on you to bring heads down, especially if it is a hometown show.

Touring the country was our dream at the time and to get an insight into what it’s like, how to manage it and an idea of what it takes really helped us establish ourselves as a touring band.

“What turns your dream into reality is networking with these bands you meet. If you make the effort and get yourself seen in a good light in any way then you have got yourself an ally who can open up new doors for you.”

We also find a proportion of the audience made up of optimistic people wanting value for their ticket money and harbouring a desire to discover something new and interesting. 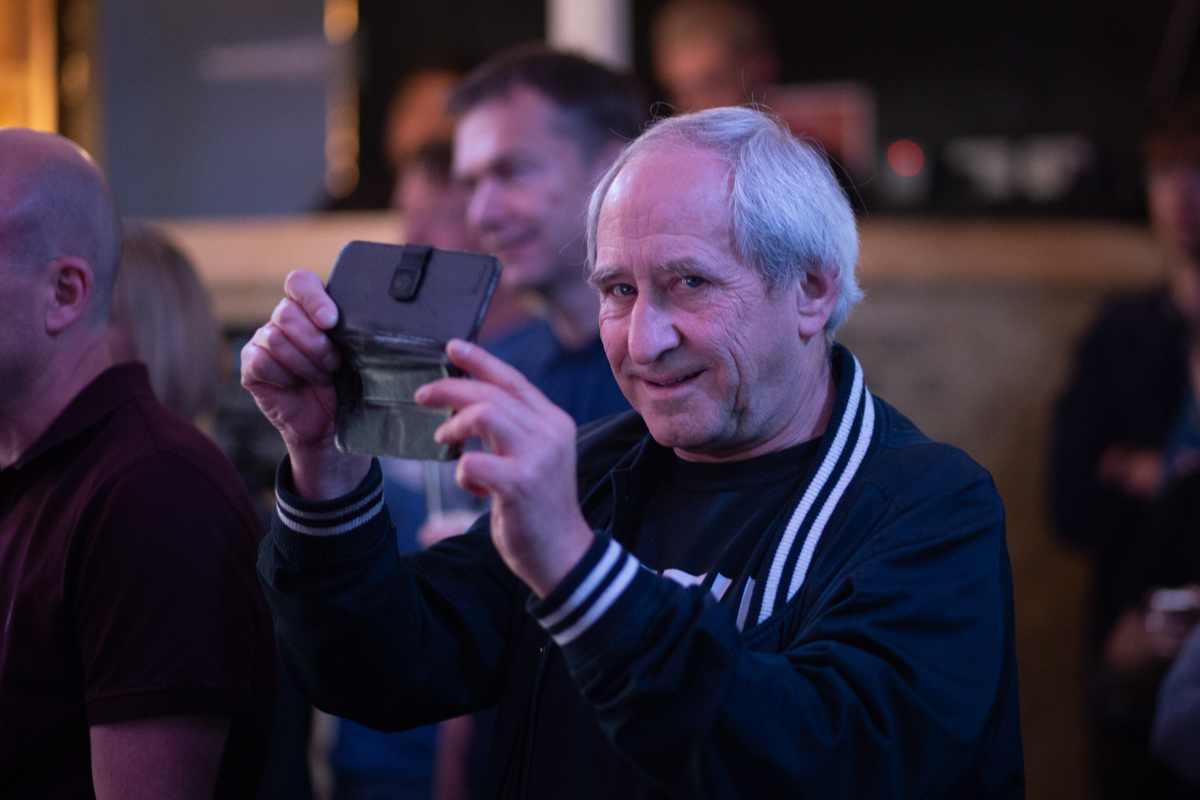 Wilfried Hagg in his natural habitat

People like dedicated gig going legend Wilfried Haag: “I have made it a principle to listen to all the performers on the night which is also a good way to discover new talent.

“It is always a positive to see all the performers at a gig. You might discover someone you instantly like.

However, please, do not talk through a band’s whole set. If you are not interested, I’d sooner you went for a drink somewhere else before seeing the band you want to watch”

We should all try and be one of these people, in this way we are nurturing the grass roots music scene.

Manchester Gigs Of The Month: November 2019 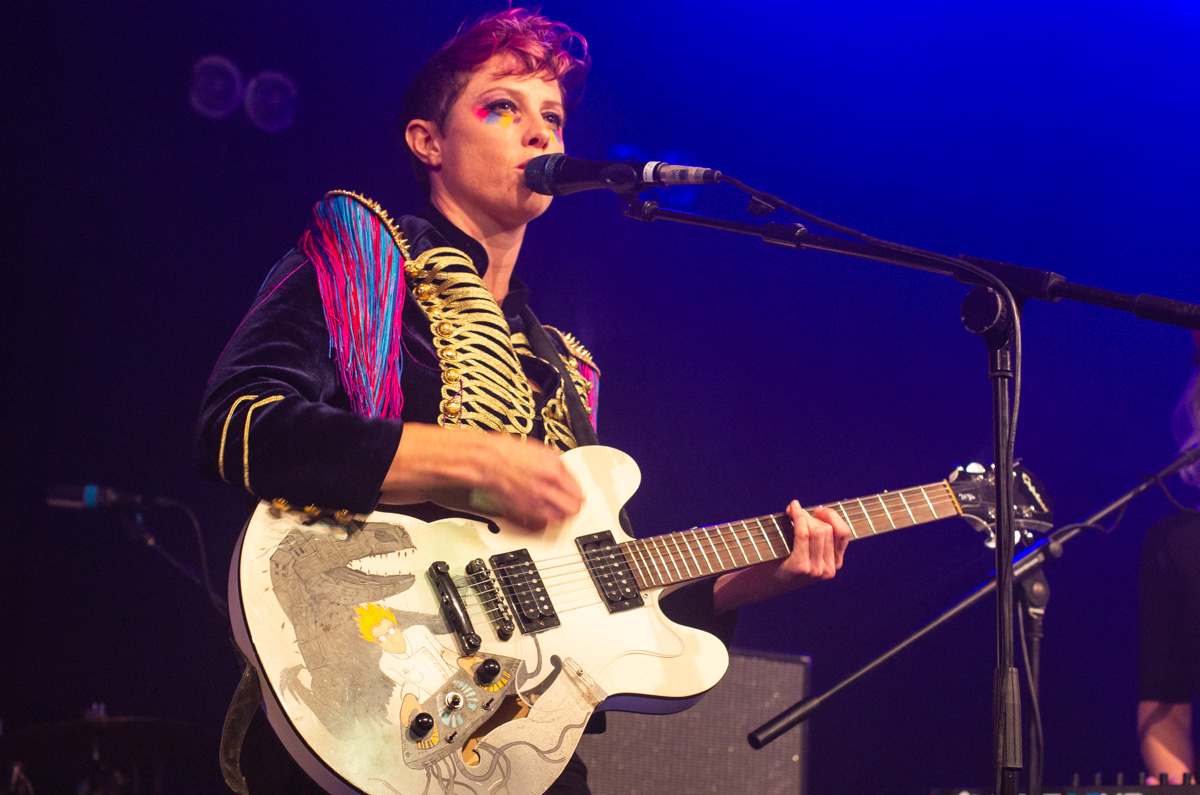 The assertion that there would be some receptive ears in the audience was backed up by She Drew the Gun’s Louisa Roach: “I get a lot from the bands we have supporting us too, it’s boss when someone comes away from your gig and they have found another band or artist that they love. I

“It’s vital for bands to get that experience, and the chance to win over a room of people that they wouldn’t have otherwise.

Before we released our first album we were lucky enough to be asked to support Fink on a massive European Tour, it was such an eye opener to what a band can achieve, even when staying somewhat under the radar, they were selling out massive rooms all over Europe it was inspiring and made you hungry for it.”

We also asked about bands’ experiences themselves of supporting headliners and the overwhelming response, whatever the mood of the crowd was that it was all about invaluable experience gained on stage. 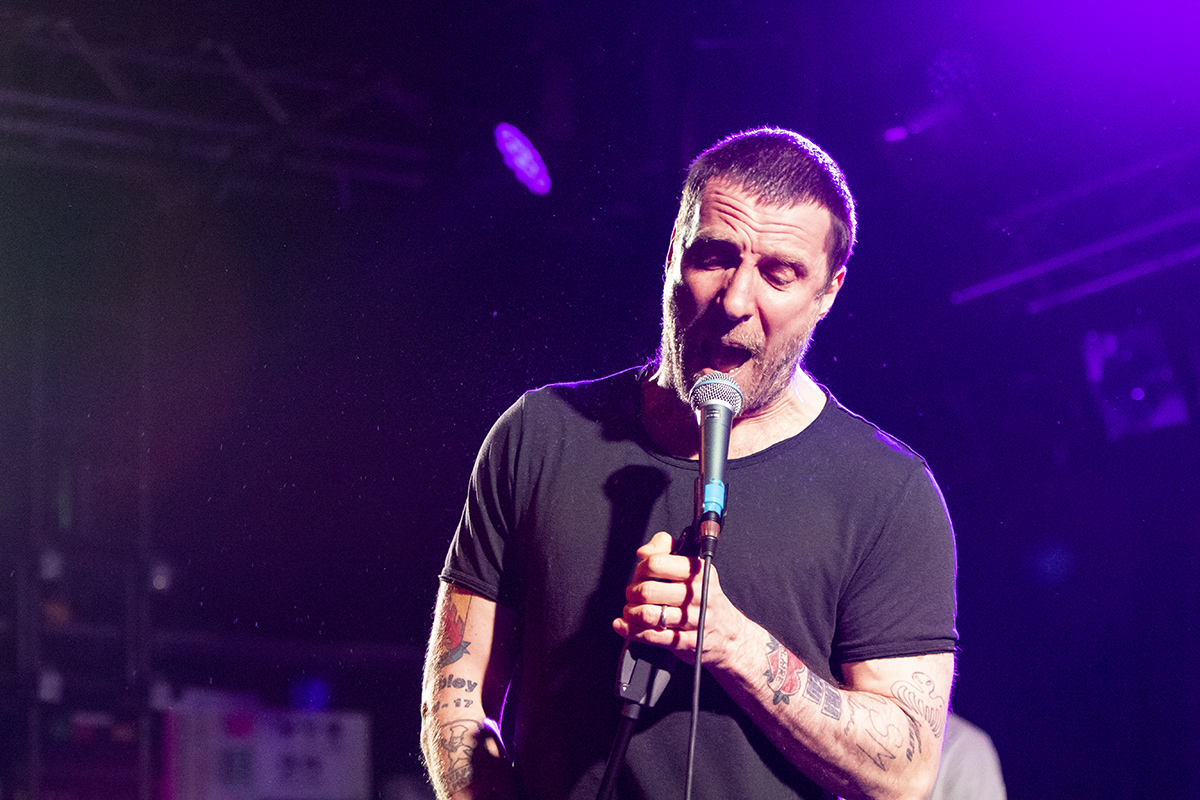 As Jason Williamson from Sleaford Mods explained: “You need to learn the ropes and that’s how you should treat it definitely. Learn your craft in real time- that’s what a support slot is all about.

Sometimes the reception is less than complimentary, but you have to grow a thick skin. Sure it’s nice to be applauded but you probably won’t be so use it to grow, essentially you should train yourself to believe that no one gives a f**k about you, they are waiting for the headliners so with this in mind It’s a win win for you.

Shit gigs harden you and you learn very early on that this game will chew you up if you want some kind of instant recognition.

Lots of break through acts support more established artists too, this helps with spreading the word or a more cynical view is that newly signed acts are billed with bigger similar genre stuff to capture that particular audience for future tours.” 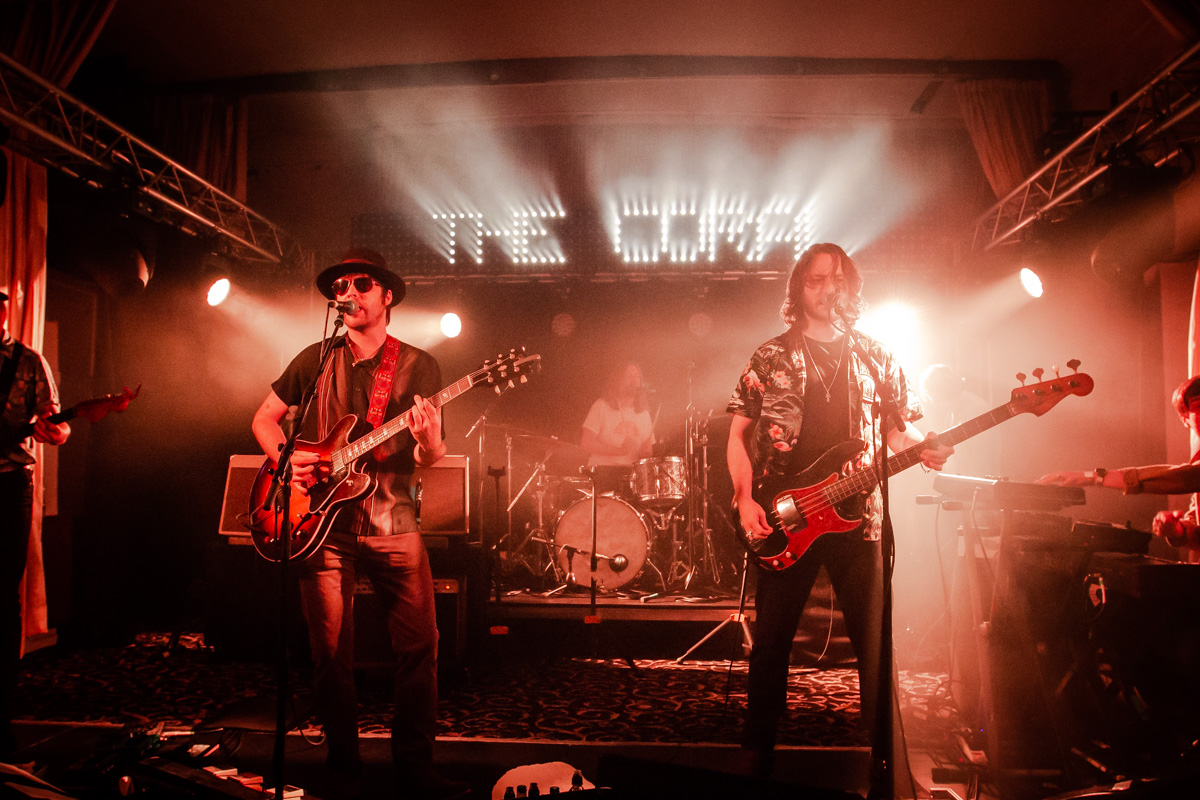 Nick Power from The Coral has very positive memories of supporting Supergrass across America when he was about 18 years of age:

“One thing I picked up from them was that they did their own gig every night and didn’t let the crowd dictate too much how they played.

“If you stick to your guns then you can tune a room full of people into your own frequency, rather than trying to play to how you perceive they‘re feeling. It’s little things like that you can only pick up from experience.” 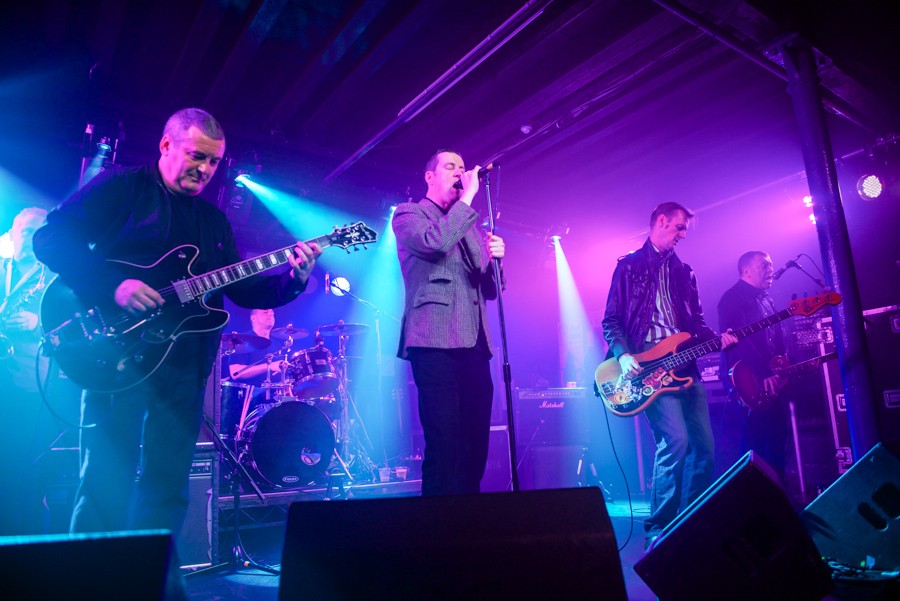 The Farm at the O2 Academy Liverpool

Peter Hooton from The Farm recalled going on tour with The Housemartins and said of the experience: “The tour gave us so much confidence and belief as we were playing to sold out audiences every night and going down really well.

A few years ago probably the most important support we ever did was with The Stone Roses and the Justice Tonight Band with Mick Jones and Pete Wylie to raise awareness of the injustice surrounding the Hillsborough tragedy.

After Ian Brown and John Squire made an appearance with us in Manchester as part of the Justice Tonight UK tour they asked us to support them at Heaton Park, Lyon, Milan and Dublin.

They gave us the opportunity to take the message across Europe and we will never forget their solidarity and support.”

If you truly love music, it makes sense to listen to supports.  It all adds up, go out see a band once a week and if you see the supports, that way you’ve seen at least twice as many bands in one year and probably found some new music you like.

Is it a good idea to publicise the band stage times? It’s not helpful to the supports, if this results in punters holding off going into the venue, preferring cheaper watering holes and piling in at the last minute.

Its only real justification would be for someone trying to fit two gigs in on one night or someone finishing off a work shift that evening who needs to know the latest time they can get in or indeed if they will make the last train home.

Some venues may justifiably choose not to post stage times online, leaving it to the last minute poster on the door.

No matter what stage of your career, and how receptive the audience is, support slots are about valuable networking experiences.

So does the support band have to fit the same genre as the headliner? I remember watching Fuzzy Sun support Blossoms last year and thinking that they were simply trying to replicate the same musical formula.

Being support slots to an established artist is an enviable recommendation and one would hope the bigger band were genuinely fans of the music.

It has also not been unknown for fans of emerging artists to go along to big shows with established artists purely to see that band and only stop on for a few songs from the headliner.

Equally when established, much loved bands support the latest sensation, a sizeable amount of the tickets in the audience will be snapped up by the supporting band’s fans.

The final words of advice from a band perspective comes from: Peter Hooton: “Always treat your support bands and crew well – it’s the golden rule!”