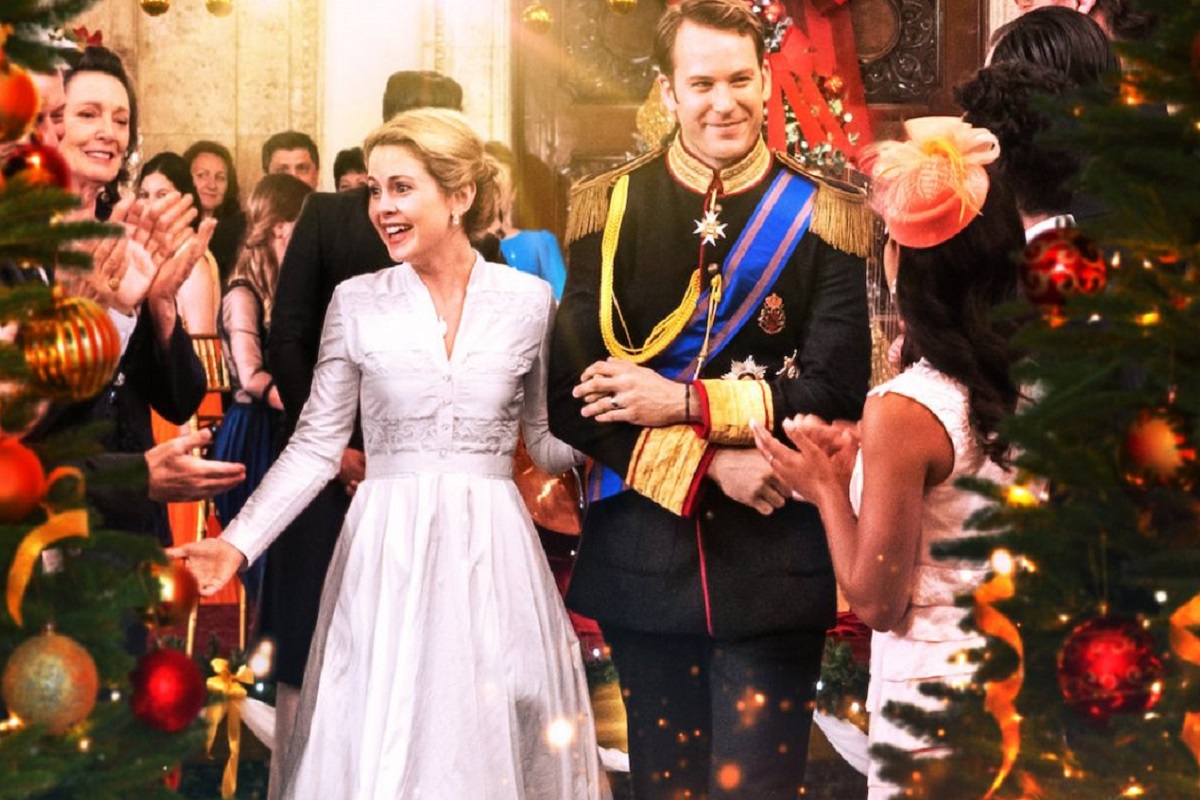 ‘Tis the season… when people who for the rest of the year are rational adults with good taste immerse themselves for many hours in the world of made-for-TV Christmas movies.

Forget about ‘real’ Christmas films, your Elf’s, Home Alone‘s and Die Hard’s. These small-screen-only schmaltz-fests are a genre in their own right.

From some time in October the TV becomes a magic portal into a world where snow is always falling, fires are always crackling and everywhere you look has fairy lights glowing in the background.

A portal that’s just a click away, 24/7. It’s a warm and cosy place – an enticing zone of light in a darkening world, where implausible plotlines lead to rewards for the good and worthy.

As one film ends in a Santanova of good cheer it’s perilously tempting to just start a new one – and another – on and on into the night, pursuing the serotonin splash of yet another happy ending.

The effect is somewhat like bingeing on hot chocolate piled with marshmallows and cream, with only the occasional candy cane for variety: your senses are screaming that it’s too rich and could be bad for you. And yet it feels strangely good…

Stroking these good feelings is big business. Hallmark, the company that is the iconic holiday movie house, has cranked out some 40 new productions this year – part of an upward trend.

The popularity of winter feelgood films is good news for a bunch of Canadian towns where most of them are made – and for a stable of actors who regularly appear in them.

Spotting the endless reappearances of key actors is part of the fun and ‘Queens of Christmas’ such as Lacey Chabert, Alicia Witt, Candace Cameron Bure and Danica McKellar have legions of camp followers.

Surrounding the leads is a cast of – shall we say – non-A-listers, mostly recognisable from TV shows and movies, so there are plenty of ‘Oh look it’s The Man from Atlantis as the grandad’ moments.

Indeed, some of us spend half the film poring over iMDB with the intensity of forensic scientists scanning a crime scene or medieval scholars seeking esoteric knowledge in ancient parchments, painstakingly trying to figure out where we’ve seen ‘that guy who looks a bit like the one from Beverly Hills 20210 but with a different chin’ before.

The answer is often ‘in a load of other Christmas movies’ – as this is a world it seems easier to enter than it is to leave – the professional equivalent of being stuck inside a snow globe (which is actually the plot of Snowglobe [2012]).

It must be weird to be, say, Dean Cain – a former Superman who now seems to work in a world of perpetual nice, having featured in 15 holiday films as well as other Hallmark movies.

Is there a point where you OD on wholesomeness and begin to hate Christmas, having spent months of the year as a professional avatar of good cheer, on sets decked with boughs of holly and every other festive trinket imaginable?

Grouchy Christmas deniers are a frequent feature of these films.

The classic plot that everyone can recite backwards is the one where a high-flying female in the city who hates the season, often for tragic reasons, is forced by circumstance to go to a small town where the spirit of the season works its magic, where she finds romance and helps save Christmas in the nick of time.

It isn’t just the mechanics of this story that are repeated but the way it happens, with instantly recognisable elements reappearing endlessly – perky Working Girl-style music as the heroine strides through the city to her job – aerial views of vast tracts of snowy forest surrounding the small town – the town itself with its main street of antique shops, florists and hardware stores seen through falling flakes of snow.

There’s always a warm-looking coffee shop around which much of the action revolves, contrasting the small town world of charming eccentrics and authenticity with the glacial towers of the city.

And you can set your watch by the first awkward encounter with the small-town love interest (often in a check shirt signalling his worthy down-to-earthness) and the sudden reappearance of the horrendous city fiancee near the end, arriving in a helicopter to ruin everything just when it looks as if it will end happily. (Spoiler: it actually does end happily.)

Other plots area available. Not many, but a few – this is a genre of familiar, and it’s clear that the makers dig repetition. So expect to see some or all of these:

Mystical Role Reversal: Santa Claus or some other cosily supernatural spirit magically transforms the Christmas-denying protagonist so that they can learn how awesome Yule really is. This might involve body-swapping, alternative timelines, role reversal, time-travel or some other form of displacement. In the Hallmark Universe, Santa is arranging several of these mind-bending morality plays every year, simultaneously – which is rather disturbing when you think about it.

Road Trips Gone Wrong: a travel snafu of some kind puts the protagonist in unwanted proximity to Christmas and intertwines them with a cast of regular folks – all with their own problems. Getting snowed in is usually on the cards, in – where else – a small town that loves Christmas.

The Race Against Time: some kind of plot to close down a Christmas tree farm, orphanage or reindeer hospital will take effect with a deadline of 23:59 on Christmas Eve.

Tasks must be accomplished to prevent this. (It is a weird feature of these films that Christmas Day itself never actually arrives – the event around which the whole tale revolves, this ‘Christmas’ that it’s so important to be part of, isn’t actually seen – the credits roll and it’s time to start over with another story.)

Becoming Royal: Instead of a small town, the fish out of water character ends up in a massive castle in a middle-European land that’s a bit like England.

The atlas of Christmas movies is crowded with these pseudo-countries: Aldovia (A Christmas Prince), Belgravia (The Christmas Switch), Winshire (A Crown for Christmas) and many more. Perhaps these nations share borders with Ruritania (The Prisoner of Zenda) and Latveria (in the Marvel Universe, ruled by Doctor Doom.)

In these tales the normal-person heroine wins the prince and saves Christmas because their down-to-earth values shine through.

Santa is in trouble!: He’s lost his memory / given up / broken down / been magically cursed in some way – so (as a variant on The Race Against Time) kids won’t get their presents unless… things happen that tangentially involve romance and family reconciliations. These ones usually have annoying shouty elves in them and are best avoided.

While – if you can stomach them at all – the standard of these films is high in terms of professional execution and delivery of the desired feels, there are a few clunkers.

Sometimes the tight budgets start to show, the Christmas cheer seems to be getting thin, the icy surroundings actually looking cold and forbidding as the characters go through the motions with empty eyes.

As an example, Christmas Connection was so terrifyingly, soul-abradingly hollow that even the Christmas-movie-loving couple who present the review podcast A Very Hallmark Christmas couldn’t cope.

Such was the malign influence of this film that they had to cut off a recording in midstream due to a domestic argument that broke out – collateral damage from gazing into this particular festive abyss.

A significant percentage of the Christmas TV movies revolve around the iconic American small town (depicted with the help of Canadian small towns as the location.) I guess if these films were made in the UK we’d be treated to 40 versions of Ormskirk every year, which would of course be awesome.

But our collective buy-in to this fantasy points to some interesting cultural obsessions.

A bit like the ‘superhero origin’ story, the ‘outsiders find their true family among other outsiders’ story and the ‘plucky individuals battle massive government conspiracy’ story, we just can’t get enough of the ‘find a more authentic life in an old-fashioned small town’ tale.

The magical place where the Christmas spirit is alive is something we want to believe in.

Somewhere out there, isolated within countless miles of primal fairytale forest, is a place where we can be more real, unlearn our urban neuroses and be transformed into simpler, better people.

Here, surrounded by warm fires and twinkling lights, we can find the heart’s desire that we somehow forgot about. Justice is done and true love found – all by the end of Christmas Eve. It’s a place where stories still make work, so that reality makes sense.

Of course this is all embarrassing hokum and if not for the long winter nights and the lassitude brought on by a prolonged diet of sugar, fat and alcohol no-one would waste eye-power on these films.

Real art challenges and disturbs rather than comforts, mirrors our problematic realities rather than peddling soothing fantasies, doesn’t it?

But – here’s a thought for the season – what if that’s not the only way to look at it?

What if there are valuable truths conveyed in these movies: that good things can still happen, there are islands of light in the darkness, wisdom and joy to be found back where you started out before you got so tired and cynical?