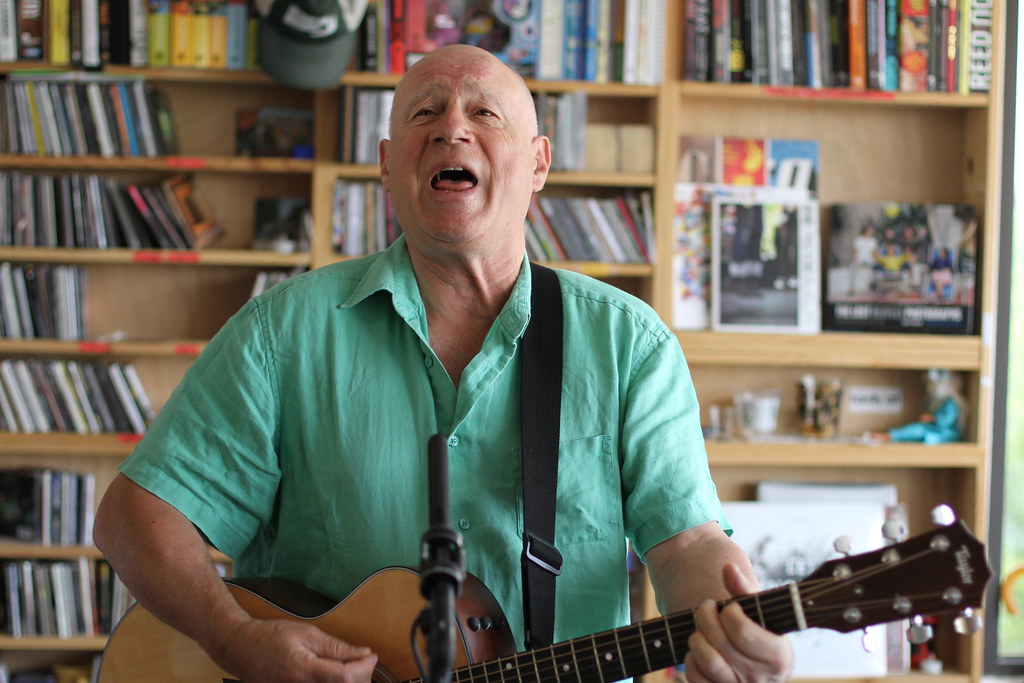 Neil Innes by mikekatzif is licensed under CC BY-NC-ND 2.0

It’s one of those that hits you from nowhere, the kind of figure that you always thought would be there and then suddenly isn’t and the world feels slightly less for the loss of somebody who seemed to bring nothing but humour and good cheer in his wake.

Neil Innes, who has passed away, seemingly out of the blue, was 75.

It’s a good age but he always seemed so much younger. Maybe it’s wit and mischief that keeps the years away?

Full disclosure from the top – I can’t claim to have been a fan of all Innes’ work: his later years passed me by and I never saw eye to eye with The Bonzo Dog Doo-Dah Band – I always felt them to be too self-consciously ‘clever’, too indulgent – is this the wrong place to say that? I feel that he’d have been okay with the subversion of obituary with honesty.

His genius, and I’m far more than happy to call it that, lay with one very select part of his career: The Rutles.

So, I’m going to dispense with the biography, I’m not going to mention him being raised in Germany and the UK, that he studied at Goldsmiths College, formed the Bonzos there, had a hit with I’m The Urban Spaceman (produced by Apollo C Vermouth, and if you don’t know who that is that’s fine, but honest to God, you need to search out the darker corners of The Beatles story), worked with the Monty Python team (and if all you ever wrote in your life was How Sweet To Be An Idiot then you’d still be adding more to the sum total of human happiness than most ever manage), not mention the songs for Holy Grail, not talk about Innes Own World as I never experienced it.

The Dukes of Stratosphear – XTC’s bizarre side project

The music of The Rutles is genius. It’s not even a question.

It’s as good as the majority of music genuinely made in the sixties even though it comes from the mid seventies.

It encapsulates in one album an entire decade in a manner that is both witty and loving.

It could have been a joke. A throwaway gag that lasted five minutes.

But Idle had Innes. Idle had this idea for a gag based on the Beatles and Idle needed songs. Or snippets of songs.

And that sketch ran on Rutland Weekend and then on Saturday Night Live and suddenly the world needed The Rutles.

Which gave us All You Need Is Cash, a documentary (or mocumentary, if you will) so wonderful that Paul Simon, Mick Jagger and George Harrison were more than happy to show up as distorted, ridiculous versions of themselves.

More importantly, most importantly, it gave us a soundtrack album, a greatest hits of a band that didn’t exist, a band whose history coincided quite nicely with another band that were quite well known at the time. In a Fab Four word we got a pre-fab four.

Neil Innes created an album of songs that sounded exactly like the Beatles without sounding like The Beatles at all, created a body of work that paid tribute while also joking about the source material but in the most respectful manner possible.

If memory serves there is an excellent Sodajerker On Songwriting episode where Innes talks about his process for doing this.

Which was basically, don’t listen to The Beatles, just try and remember what the world sounded like at the time the ‘real’ songs came out.

Again, some could have stood as jokes. Ouch is a joke. I Must Be In Love is a joke, Blue Suede Schubert is a joke, Goose Step Mama is a joke. These songs are jokes, their origin obvious, they’re satire. Except they’re not.

Forty-five years on from their creation they genuinely stand as a body of work that most bands of the era they supposedly parodied would have killed for. Yes, Love Life is All You Need Is Love with John Brown’s Body repacking La Marsellaise, with every cello note sitting as George Martin would have placed it, with Innes’ vocal duplicating in no way whatsoever honest Lennon’s finger in the ear, gum chewing performance of 1967 and the outdo chant of ‘Love is the meaning of life, life is the meaning of love’ and the improvisation of ‘Hold My hand, yeah, yeah’ adding those details that make the most cutting wit a perfect tribute.

A brief history of The Rutles mania

The music ages as the sixties aged; guitars move from George’s 1963 rockabilly licks to his late decade slide work, drums move from the Merseybeat swing to the Pepper era orchestral fills, pianos appear at the time the four fab lads introduced them, lyrical conceits move from the simplistic just post rock’n’roll simple songs of love to the flower power pretension Edward Lear nonsense of Piggy In The Middle. Every detail sums up a decade.

The Bonzos were reunited one last time only a few weeks ago for a victory dinner. Our thoughts and prayers are with Yvonne and the family at this sad time. RIP to the Urban Spaceman himself, the great Neil Innes xxxx pic.twitter.com/zWKmCh4qSW

And Neil Innes wrote it all in something like a fortnight. (I may be making that last bit up, I can’t remember the details but it doesn’t matter, the point’s the same, bring the legend and all that.)

That, my friends, is genius. Sheer bloody genius.

I can’t tell you how often I return to the songs of The Rutles. It’s a lot.

I’m probably preaching to the converted here but just in case: if you don’t know The Rutles, use this moment as a chance to discover them.

Listen to Doubleback Alley definitely not being Penny Lane, Goose Step Mama being the perfect soundtrack to a quartet playing Hamburg, Get Up And Go not resembling Get Back at all and Living In Hope being the perfect replica of that Ringo (or Barry Wom) track that every album had to have.

The Beatles at the movies – top ten Fab Four films

Listen to that range and marvel at the ability of one man to make it happen with wit, joy, humour, warmth, attention to detail and absolute respect and love.

And above all, listen to Let’s Be Natural – it’s honestly as good as anything ever.

One final thing: The Beatles released Anthology, mysteriously The Rutles ‘discovered’ an album’s worth of ‘unreleased’ material and released it as Archaeology. In The Beatles’ typeface.

That’s how you keep a joke going.

Now that is satire.

All you can do is hope you leave something behind. All this is ours forever. Thanks Neil.

Fairwell Neil Innes. One of the nicest people I’ve ever met and a towering talent. pic.twitter.com/JJ2vZUtkKO

Neil Innes has gone. As a Python-obsessed teen I saw him at Darlington Arts Centre & missed my bus home to catch his brilliance. I used to record ‘The Innes Book of Records’ on C-60s & marvel at his talent. I still hum ‘I like Cezanne, says Anne’. Sweet dreams, sweet idiot.

RIP Neil Innes. One of the best songwriters and a lovely man. So many great songs, from the Bonzos to the Rutles and onwards. https://t.co/5CHmIxfEXc

Neil Innes dying at a time when the world needs all the Neil Innes it can get is an especially cruel blow. I've loved his work since watching Innes Book of Records as a kid, after which my mum introduced me to the Bonzos. Met him when the Rutles played Bristol. Sweet man.

Neil Innes – the most-talented-but-least-ambitious man I ever met, a real gent with a beautiful soul. I never had anything but the best of times with him. Gorilla rescued me as a teen and he let me join the band as a middle-aged man. God I loved him. So sad.

If it's true that the great Neil Innes had sadly passed away, please let me raise a glass to the man. Forever a fan of The Bonzo Dog Doo Dah Band. Allow me to share a favourite clip of them in action (with a bonkers Innes guitar solo too). RIP Neil. https://t.co/wojCBk7GPY

Really sad to hear about Neil Innes. Punch in the gut to end the decade on. RIP to the sweetest of idiots.

We are devastated to learn about Neil Innes.

He played The Cavern just this year and was booked to play Beatleweek 2020, we have been in regular contact with him so this is a real shock

A friend of The Cavern for over 30 years, he will be forever remembered, and missed. pic.twitter.com/aoJTsBeCx2