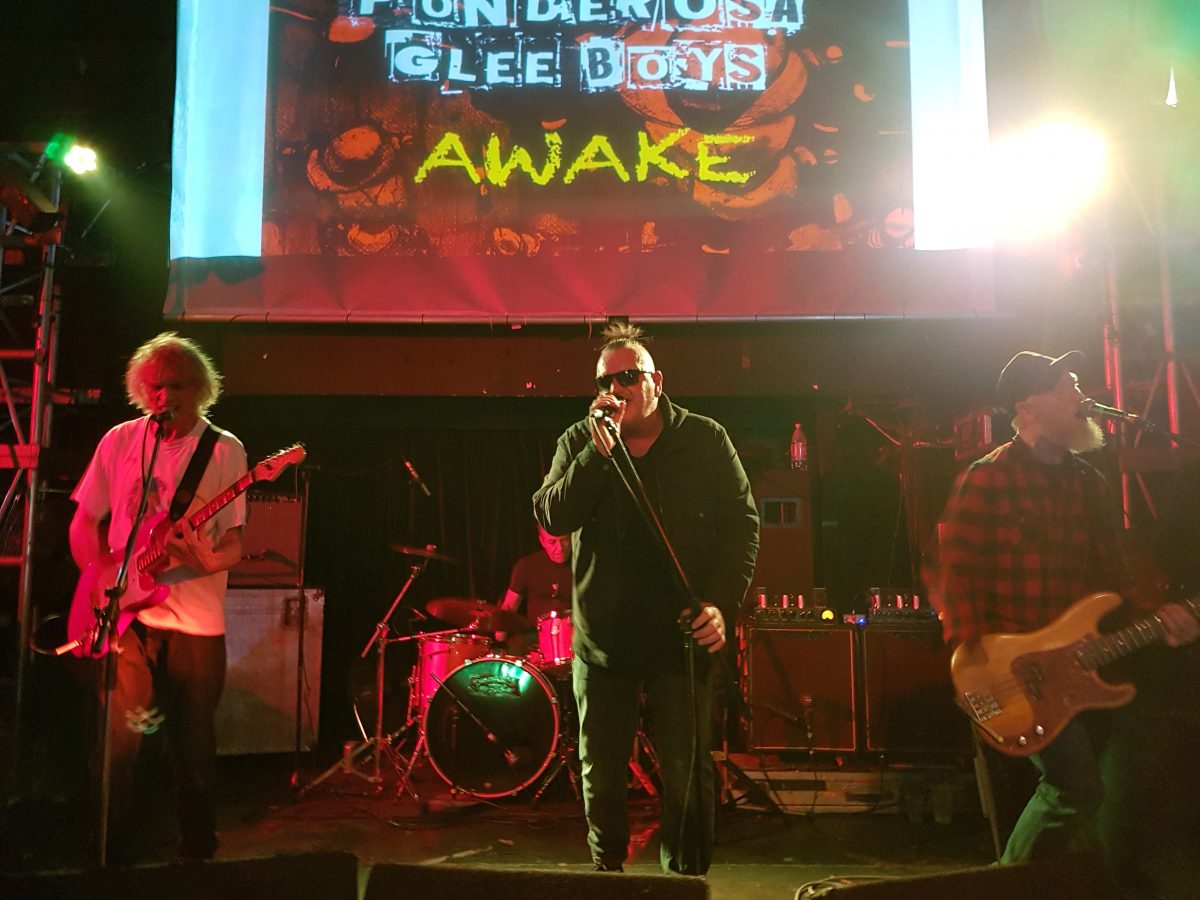 The Ponderosa Glee Boys return for their annual December shows and Getintothis’ Banjo witnesses a band ready for greater things.

The Ponderosa Glee Boys story has been told a lot lately, how they were the band that got away from Liverpool’s post punk scene, how they spilt up and then reformed 30-odd years later, how it took them 41 years to release their debut album.

But tonight none of that matters. Tonight we are judging them their current standing, shorn of legend, just a band standing on a stage playing their songs.

And tonight Ponderosa Glee Boys show that they are a world class act.

In front of a packed District, on a cold and windy Sunday evening, they delivered the goods as no other band at the moment can do, playing their album in full, in order.

And, in an extraordinarily generous gesture, the band gave away a copy of their debut album, Awake, to all those lucky enough to have ventured forth tonight.

The Eric’s crowd are out in full force to support their own, with Liverpool legend Doreen Allen in her favourite spot, on the door chatting to punters as she takes their money and hands out CDs.

To start things off, Vermin Suicides take the stage as the venue is still filling up. The early arrivers are treated to a set of high octane punk songs with occasional reggae flourishes.

This is the first time our paths have crossed, so I’m afraid I don’t know their names, but the singer is possessed of a certain geekish charm and a boyish enthusiasm, their drummer is a powerhouse of energy and really drives the band forward. The bass player is suitably low slung and solid and their guitarist is able to switch between styles at the drop of a hat.

By the time they finish their set, they are playing to a good sized crowd and the cheers they get show that they have done their job well and warmed up the crowd nicely. Good job.

Ponderosa Glee Boys take to the stage bang on time and start the set by playing their own intro music, seemingly improvised to a backing track. Suitably atmospheric, it sets the scene as the band burst into their first song.

The disembodied voice of Donald Trump comes out of the speakers, talking about building a wall and the appropriately titled Liar starts the set.

Ponderosa Glee Boys make a mighty racket.  Singer Carl Eaton is in fine voice as he prowls the stage. The Glee Boys would be perfectly at home on a bigger stage than this is only they were in a position to gig more often.

Considering this is the first gig the band have played for around a year, and with only 5 days rehearsal, Ponderosa Glee Boys have enough charisma and command of the crowd to come across as real headliners. In a fair world, they would get the chance to prove this with a full tour, festival appearances and the like, but this is understandably not likely.

Tonight is the third successive District gig the band have played on the 8th December, and it is now a fixed tradition, as much part of the festive build up as putting the tree up or eating a chocolate orange originally intended for somebody else.

They have improved in leaps and bounds over these three years and have now arrived at their classic line up. Personally, we’re already hoping for new material.

Eaton is at home on stage, at one point he even stops mid introduction to take a call on his mobile, inviting the audience to tell the caller to fuck off.

Guitarist Mike Mooney is incredible, as his pedigree (Spiritualized, Massive Attack, Echo and the Bunnymen) would lead you to believe. He is able to sound like three guitarists at once and give PGB an enviable wall of sound.

Bass monster Phil Hartley and drummer Mark Robson provide a superb rhythm section, tight and with the right amount of groove and attack.

Tonight’s only cover version is a fairly faithful run through of Magazine’s The Light Pours Out Of Me, given more punch and attack than the original. It is a good indicator of where the Glee Boys take their inspiration, a time when punk was morphing into post-punk, but still had a good amount of bite.

Ponderosa Glee Boys present us with a modern take on this music, but one that wears its influences proudly. They have resisted the temptation to be too modern or too retro, striking a difficult balance between where they come from and the world in which they now find themselves.

Having played their album in full, they disappear off stage, only to be dragged back on for a well-deserved encore.  It still isn’t enough.

Hopefully, the band will be able to play more gigs over the rest of the month, maintaining their habit of hit and run gigs when you least expect them. Keep your eyes peeled for further info, as this is a band you do want to miss.