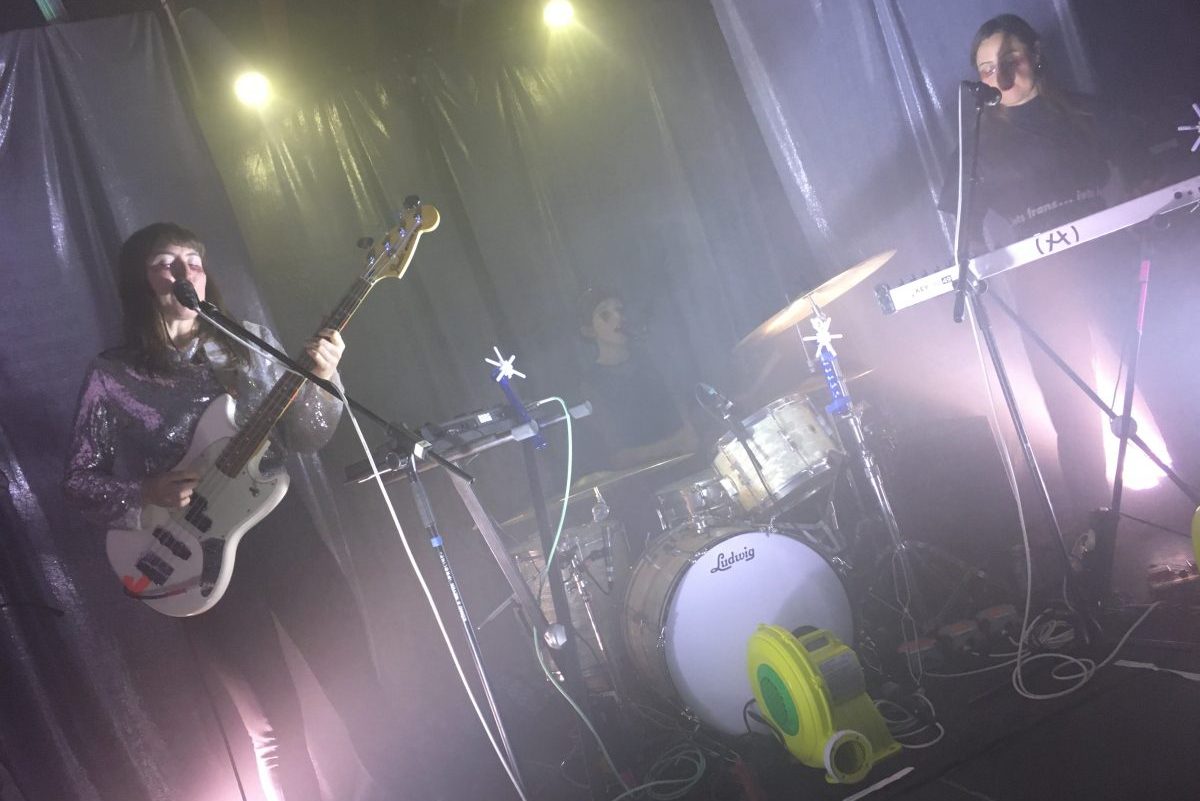 A Full Moon is all about intensity, concentrated energy, so they say.

We have one over our heads on this fateful Thursday, as we arrive at the Kazimier Stockroom to spend the evening with the coolest girls in Liverpool, Stealing Sheep.

So we expect an energized performance from Rebecca Hawley, Emily Lansley and Luciana Mercer, although there’s also the fear that a werewolf will come out of the ballot box and steal our joy – sorry, no politics here, this is a gig review.

We’re a bit late – there was an election, and we were voting –, so we run to catch the first act, Despicable Zee, the solo project of Zahra Haji Fath Ali Tehrani.

A drummer who explores almost anything beyond drumming to create her experimental music, Zahra is also behind the Young Women’s Music Project, an educational initiative offering free workshops for girls.

That’s more than enough to look forward to see her playing… but we won’t.

We’re late, we were voting – enough of politics! –, and Despicable Zee’s set has just ended. Sorry, Zahra. First bad news of the night.

While we wait for the second act, Vide0 – we take a look at the surroundings.

The tiny Kazimier Stockroom is decorated with all sorts of pink lights, neon, fluorescent colours, in true 1980s punk-new wave fashion. We feel as if we were in Margaret’s room, the one invaded by aliens on Liquid Sky. Aliens would love it here.

So here come Vide0, which are Emily Garner, from Leeds, and Alex Brown, from Manchester. Alex looks like an ordinary bloke, while Emily has definitely come straight out of Liquid Sky, and together they immediately captivate the room.

Starting with a tune called Heavy Shoulders, with Alex on bass and Emily playing keyboards and pressing buttons, they present a solid and catchy 1980s-inspired electronic sound.

Our first reaction is: “This. Is. Very. Good!” – and we watch them more closely.

Potential Friendships is the next song, and the two sing together, in a lovely vocal combination – we think of Human League, of course, and wonder whether the world is about to become as cool as it was in 1982.

Our feet start moving, quite hard to control them, and we know the reason: Vide0’s exciting beat, set by the bass. As The Go-Go’s would say, they got the beat.

On the next song – surprise, surprise – Emily and Alex swap places, and now she’s the one playing cracking bass lines. Vide0’s music becomes faster, and the duo shows wonderful musical chemistry, changing the pace, exploring sounds and linking one tune to another.

Vide0 have a single out, Mathematics, whose promotional video takes us back to computer graphics of 35 years ago. It’s an impressive dancing tune that could easily dominate night clubs throughout the country.

Emily is also a video artist, having produced material for Stealing Sheep, so we can see that there’s talent aplenty on Vide0. We’ll definitely hear much more from this brilliant young pair.

With the Vide0–Stealing Sheep connection established, we wait for the main attraction. Tonight’s gig is one of four the Sheep are playing at the Stockroom, and they’ve made the venue their own.

There’s a big inflatable sheep hanging on the left side of the stage – watch out, Roger Waters –, and the cute farm animal is just one in a long list of features Stealing Sheep bring tonight. They take their stage production seriously.

Another Saturday, another gig. Tonight it was @stealingsheep at the @thekazimier Stockroom, which is a very intimate venue! What a Brilliant night. Band on top of their game. Fantastic stuff, big wows indeed! ❤ pic.twitter.com/zBndAhTLXc

The three ladies arrive, glitter around their eyes, following choreographed moves. They first stand in a still formation, then engage in a robotic dance routine that would make Kraftwerk proud. Good start.

Rebbeca, Emily and Luciana take their places on keyboard, bass and drums, respectively, and begin their set with the super track that is Back in Time, from their latest album Big Wows – which was a big wow indeed here at Getintothis, making into our list of the 100 best albums of the decade, at 59!

They follow up with Why Haven’t I?, also from Big Wows, a delicious pop tune with a sexy bass line. It’s a fun song, but maybe there’s a serious side of it – a desperate call for communication in a time when people don’t talk openly about their feelings.

Breathe is next – we love the idea of two people finding each other in the dark. For Genevieve – a song from a time when Stealing Sheep were more indie than electronic pop – the trio asks the audience for clapping, and clapping is what they get – the Full Moon seems to be working.

They dance again, and we have more visual tricks, with the three girls wearing pretty cool glasses with pink hearts that glow in the dark.

The three come to the front of the stage for some more slow choreographed moves, and Luciana sings Just Dreaming.

They don’t know it, but it’s 10pm, and we can’t help it, we quickly check out the news on our phones…

@stealingsheep were easily the best gig I’ve been to this year, put on such a good show🙌🏼 pic.twitter.com/YBneYRFXpk

The Full Moon acts again, energy returns with a vengeance, there’s more clapping, and everybody enjoy Big Wows – “It’s just a little bit of fun, she said”, but we’re all having lots of it. The Stealing Sheep experience is all about having a fantastic time, something that comes naturally from the stage.

Their enjoyment is as captivating and lively as their music, and the audience responds in the best way possible: shaking their skeletons.

In this past decade and over three albums, Stealing Sheep evolved from the indie gloomier sounds of Into the Diamond Sun (2012) to the sheer pop joy of Big Wows.

They’ve thrown themselves into party mood, and their party is complete, with make-up, visuals, dance, performance. It’s not theatre, it’s pure entertainment. It looks even better if something goes wrong, so the girls can just laugh at it, freely.

That’s what happens when they come back for an encore covered in white outfits which are supposed to be inflated, so they become big pointed stars – or something like that.

Of course there are technical issues – Emily’s outfit lets her down and fails to inflate –, and of course they laugh, enjoying themselves more than if the stunt had been flawless.

In that spirit they play their single Jokin’ Me, a perfect Friday night pop tune about romance – in this case, a rerun that should be avoided.

Liverpool has already given the world one top class electronic band this century, Ladytron, and Stealing Sheep have been following their steps, but with a different mood.

They’re making electronic great again in their own, playful way. They’re not joking us, because it’s serious. Seriously fun.

Those who watched the Sheep tonight had a fantastic time and eventually forgot all about the annoying stuff the world keeps throwing at us.

By the way, was there not something on the news tonight? Something important? Nah. Not important. Not today. 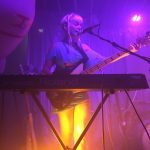 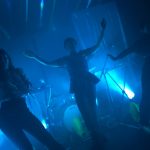 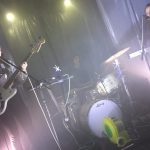 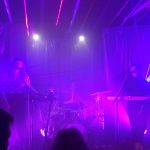 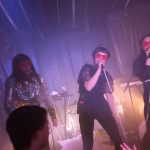