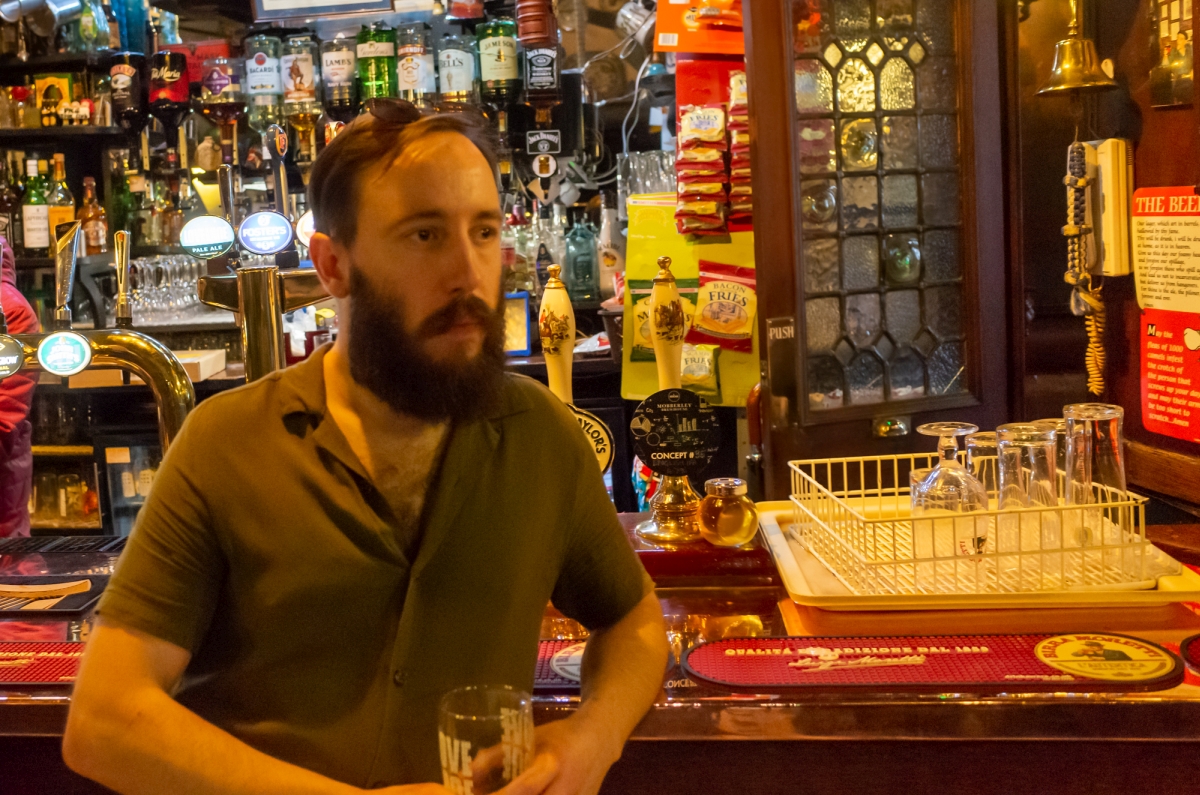 Simon Ward is making waves with his songs about murder, loss and decline, Getintothis’ Peter Goodbody had a couple of pints to find out more.

As an integral part of the SPINE collective, which includes bands such as LONESAW and MAL, as well as regular radio slots for Melodic Distraction, Simon Ward seemed like the ideal guy with whom to have a pre-Christmas beer in Peter Kavanagh’s one Sunday lunchtime in early December.

We also had a fuck up for which we needed to atone.

Although we’ve seen him play a few times, we managed to miss his latest outing supporting Lightning Dust at 24 Kitchen Street, which was poor on our part.

He’s known for his dark subject matter and his use of the unusual autoharp to accompany his work.

But, he’s an engaging guy and a mini session in town was an invitation we weren’t going to pass by.

To be honest, we hadn’t got a fixed agenda of questions, nor any particular idea of what we wanted to talk about, so we just got the beers in, set the memo app on the phone to record and let’s see where we go.

Getintothis: Where do you get your influences from?

Simon Ward: “I grew up with post punk, that was kind of my first area that I really got into. Other than that it was the more indie side – Magnetic Fields, The Smiths. My first gig was Morrissey in the Empire.

Getintothis: That’s achingly cool, or it would have been at the time. What’s your view on Morrissey now?

SW: Well, he’s a cunt isn’t he? Soft, simple as that really. I don’t really listen to him any more. I used to really love all his solo stuff.

“Viva Hate and Vauxhaul and I, but I can’t listen to him any more. I loved all that, and then going round record shops, I feel like I’m the last kind of generation where you still had [that thing]of finding things on CD when you don’t know what the band is, you just see the title. And then going into what is now just downloading and streaming. I was just on the cusp of that.” 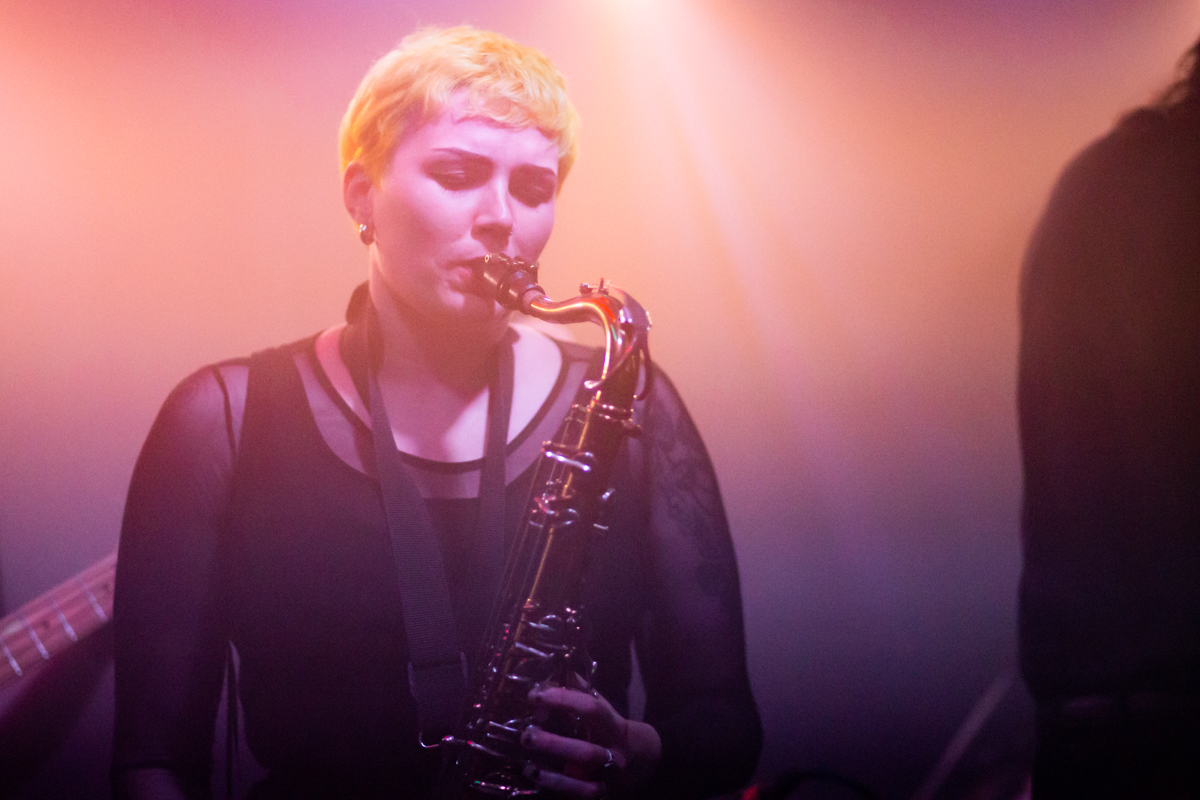 Getintothis: Buying stuff because you just like the cover?

SW: “Yeah – Bauhaus. I found that for sure. Siouxsie and the Banshees as well.

Getintothis: We remember seeing Bauhaus in Liverpool supporting Magazine and they opened with Bela Lugosi and we were going, like what the fuck is going on here? For a band to open with that song, at 12 minutes and you’re thinking, this is unreal.

SW: That’s boss. I loved all of that. The sax player in my band, Jez from Lonesaw, she was my first proper girlfriend. We met on a train going to Southport when we were, like 15.

“She’s now one of my best mates. Her mum and dad are known industrial musicians.

“Her dad was the drummer for Death in June on their first couple of albums. Her mum was in Mother Destruction. So when I met Jez, I was just getting into counter culture and stuff like that.

That’s when I got more into noise and industrial stuff and counter culture stuff. There was a period when I got into more psychedelic [things].

But since then, Nick Cave is one of the ones I’ve really stuck with. And Leonard Cohen as well.

“I couldn’t get a ticket, but I thought there would be touts, but there weren’t. I met this Canadian girl and she was the same, but she said there were a load of people round the back watching him from the woods. It was awesome.

“There was a couple of hundred people all sat in the woods, dark as fuck. We couldn’t see the stage, but we could hear it. It was beautiful.”

20 Albums for 2020: Grimes to Tame Impala and Caribou – records we can’t wait to hear this year

Getintothis: Do you call yourself an artist?

SW: “Yeah. That’s my job. [Censored]. I consider myself more of an artist than a musician. I’ve always done all the things I do now since I was a kid.”

Getintothis: You write as well, don’t you?

Even in school, I used to write stories and poetry. I’ve always drawn. I love drawing and painting. It’s DIY, it’s not a punk background, I identify with post-punk, but I had crap guitars with three strings and I didn’t know how to play.

And I saw a course in Brighton. And that got me into the noise scene. There was a pub called Caroline of Brunswick – a goth pub – Nick Cave’s on the wall and Siouxsie and the Banshees, but upstairs they used to have this noise night. I used to play there all the time. So, from just doing stuff in my bedroom [to that].”

Getintothis: Tell us about the autoharp.

SW: “It actually goes back quite a while. When I first got into making music, everything [I was using] was like broken and crap – guitars from Cash Converter.

I could never, and still can’t, play Barre chords. But [I was at a goth festival in Leipzig] and saw a band called Faun – a big gothic folk band – and one of them was playing an instrument called a nyckelharpa. It’s a weird mediaeval instrument, like a cross between a hurdy gurdy, a 12 string guitar and a cello. It was played with a bow.

And that just got me interested in weird instruments. A lot of those kind of things are well expensive and require a lot of technique – you need to be a serious musician to play them well.

But, with the autoharp, if you sit down with one for a few weeks, you’ll pick up the basics pretty fast. It makes the chords for you, when you get into it, it’s about the way you pick with your fingers.

“Having seen Faun, I came home and Googled for weird instruments and I saw the autoharp, thought that’s pretty cool [and bought one]. And then I bought the one I use now when I was living in Berlin.” 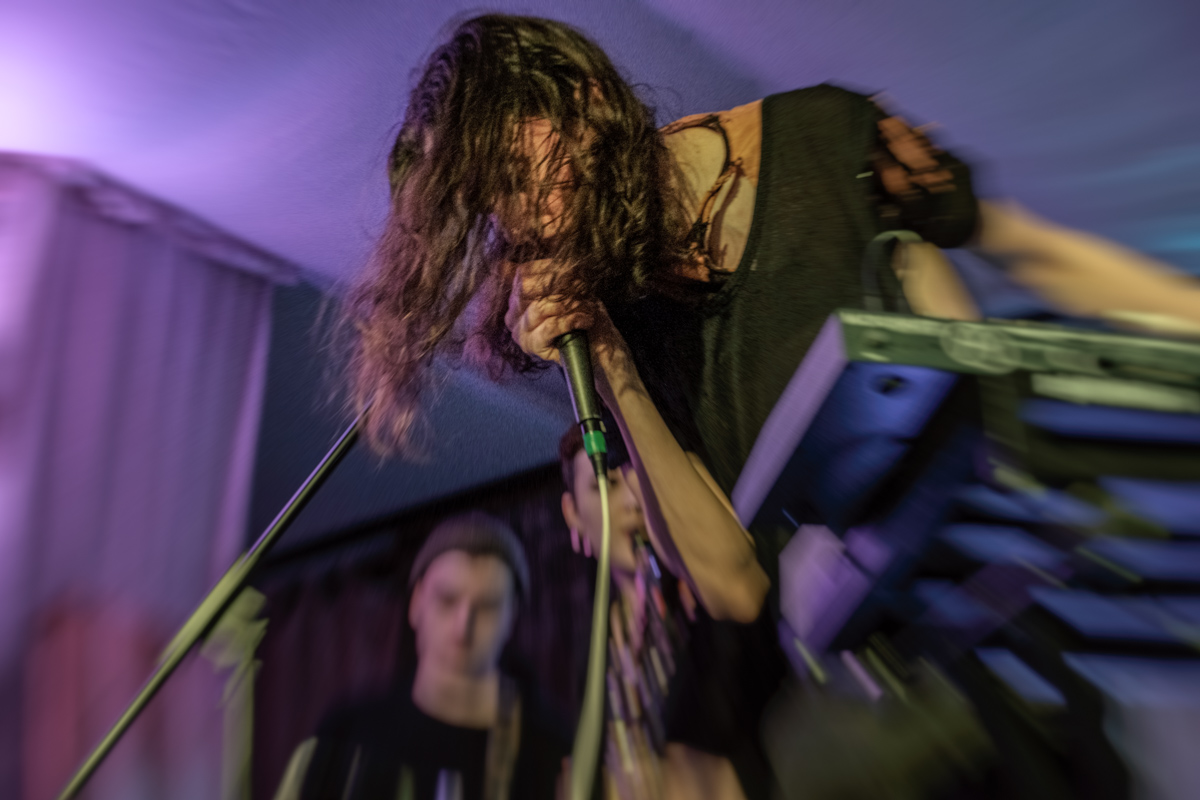 Getintothis: Tell us about SPINE.

SW: “When I came back to Liverpool after being in Berlin (I had a band in Berlin – we did gigs, but never recorded – we were called Oil in the Stone – we had a pianist from China, a drummer from Paris, a cellist from Canada, a sax player from New York and me on the autoharp).

At that time I was obsessed with Philip Glass and all our songs were long, drawn out, like 15 minutes or more [Like you were talking about Bauhaus before]. In retrospect it didn’t work because there was too much repetition, but I enjoyed that band. It taught me a lot – it was the first time I’d had a band, writing, shaping and orchestrating the music.

After a while, people moved on and I was working, with no time to organise bands and the like.

And then I came back to Liverpool, I put a band together, but that kind of petered off. I let it go.

“Then I was chatting with Jez and Ben [from Lonesaw] and they persuaded to me to put stuff together – Ben would play drums. Logistically it was easy and it all clicked. Everyone was into the same kind of music and we’re just all bezzies now.

“Everyone stayed. No one’s moving on. It works and I was just lucky. SPINE was up and going anyway, so it gave me a platform. I think it’s boss what they do – they’ve set it up really well.”

And with that, we had another beer, turned the recorder off and just sat and chatted.

There’s a new EP coming out in March and that will make us pretty happy, even if the subject matter doesn’t.