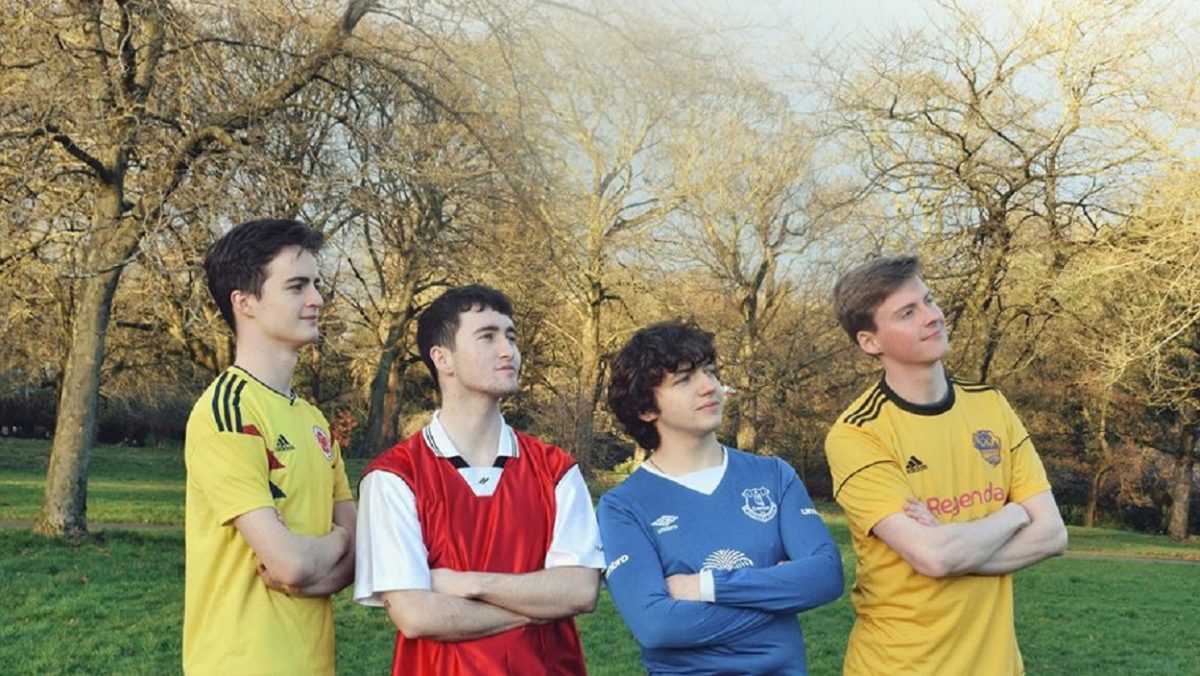 Courting are fast becoming one of those names that are being talked about in all the right places, Getintothis’ Steven Doherty finds out all about them.

Courting are a band that have been on our radar for a long while now, and are now capturing the attention of the wider world.

Originally formed at school in October 2018, they have been hard at it, working through the levels of the Liverpool scene since then.

First release Not Yr Man enjoyed a large amount of Spotify spins, but their reputation has ballooned with the release of their recent sophomore single, the two minute bundle of indie flavoured joy, Football.

They describe the song as being about “people living out their football dreams through their kids and pushing them into it for the money, and how important football is in British culture.”

It seems to have struck a chord with the public as it has already received airplay on both Radio 1 and 6 Music and has led to the band having an already announced slot at this year’s Sound City.

Before that though, they have their own headline show at Phase One on March 28, which follows on from their recent support slots with such luminaries as FEET, Heavy Lungs and a riotous set with Sports Team at Arts Club.

Ahead of this, we caught up with them to ask them our 13 questions.

1. Where are you, what are you doing, and how’s it working out for you?

“We are currently underground, under the Baltic Social (like moles) practicing for our next run of shows, and without being cocky, we think it’s going pretty well.”

“In Liverpool, our favourite venue is probably Phase One or Sound, in Manchester, we love Rebellion and YES. I’d particularly love to play the Pink Room there just because it looks great.”

3. What was your first gig you went to?

(Sean) “Unlimited breadsticks so I can sustain myself forever and never die.”
(Michael) “Unicorn meat, which they couldn’t find so I too could never die.”
(Sean) “Monkey brain from Temple of Doom.”
(Sam) “One Cumin Seed.”

5. Apart from yourself, who’s the next big thing?

“It’s the below link, the Annabel Allum gig.”

“We’d like to bask in the fact that we have continued to bother Getintothis’ for over a year now, thank you.”

7. When did you last shout at the TV?

“On a serious note, when we saw the exit polls.
On a more serious note, anytime someone takes the low offer on The Chase. You’re better than that. Have some self belief. At least go for the middle option.”

“The Fish from SpongeBob Squarepants that shouts “Hoopla!”. And gets bricked.”

9. Who is the best or worst ‘celebrity’ you’ve met?

(Sean) “Marti Pellow once gave me a piggyback.”
(Sean) “I bonded with Nathan from Microwave about both having a stammer.”

10. What’s the first record you bought with your own money?

(Sean) “It IS Maybelline.”
(Sean) “Not Yr Man was ghost-written by Chris Martin.”

12. What’s the greatest chocolate bar and why?

(Sean) “I love Star Bars. Right, it’s not rectangular, it’s circular, it’s got two layers, a caramel layer and a chocolate layer.
But it’s NOT a Mars Bar, it’s got nuts and a good centre and that’s why Star Bar is the best chocolate bar.”

“Please come and see us live if you have the chance. We promise an immersive cowbell experience.”

Share. Twitter Facebook Google+ Pinterest LinkedIn Tumblr Email
Previous ArticleThreshold Festival 2020: “You need to love this game unconditionally if you want to stay in it”
Next Article Liverpool Sound City reveal artists for Launch programme including The Mysterines, Podge and more