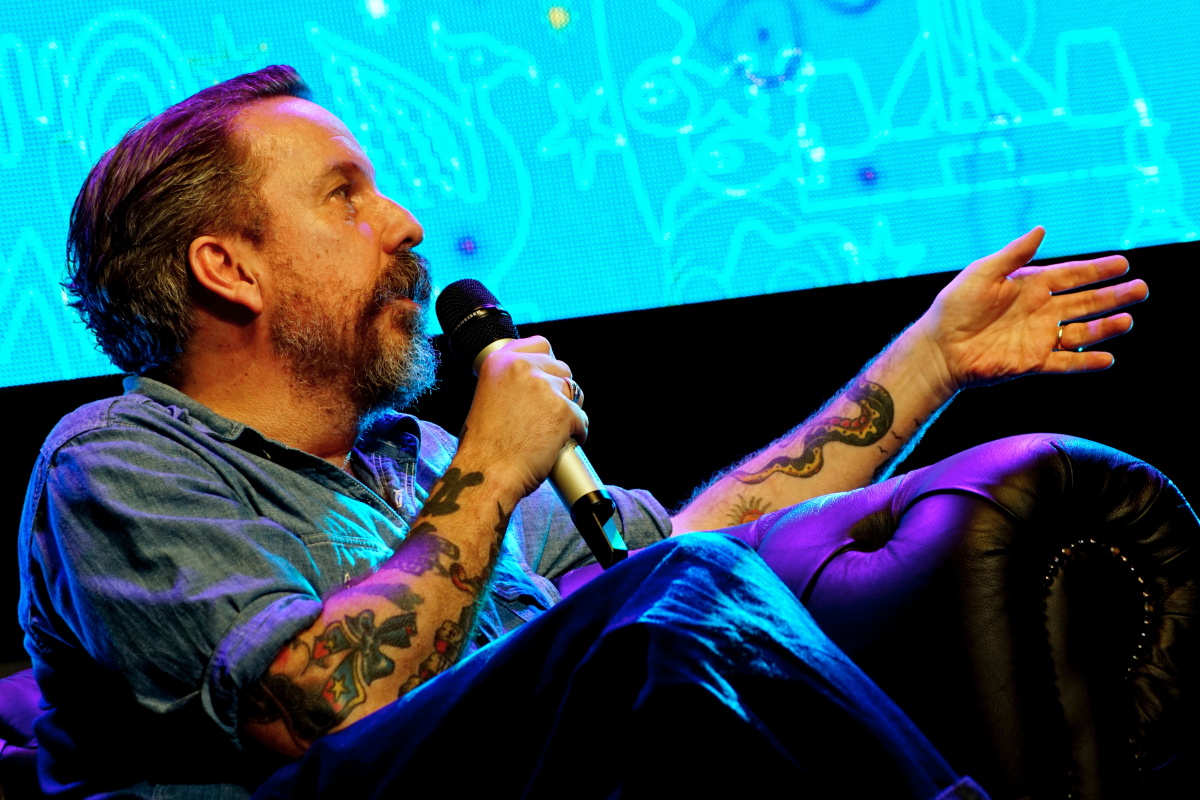 Following the sad news of Andrew Weatherall’s death, Getintothis’ Banjo and Jono Podmore give their personal reflections on a dance music pioneer and unsung hero.

Andrew Weatherall was one of dance music’s key players. And yet he deliberately shunned the life of the superstar DJ that could have been his, choosing instead to focus on creating beautifully esoteric music in whatever way he saw fit.

A keen record collector from an early age, Weatherall first got into DJing when he realised that his own collection of records was better than most of the DJs he found himself listening to. He said of this “Since I started buying records I would always kind of… corral people, like ‘come round and listen to this new track’. To me, DJing in a big club always has been just an extension of that.”

He was one of the first DJs to start playing what would become known as Acid House, guesting at the legendary Shoom club.

He started the Boys Own fanzine with Terry Farley, Cymon Eckel and Steve Mayes, inspired by Liverpool’s own The End fanzine.

As the team behind the Boys Own fanzine got involved in the emerging Acid House scene, they became the first people to document what was happening.

The fanzine quickly extended it into record label Junior Boys Own, releasing records by Underworld, Chemical Brothers and X-Press 2.

It was his work with Primal Scream that gave him the attention of the wider public, as he took their little known track I’m Losing More Than I’ll Ever Have and turned it into the dance floor filler that is Loaded. He did this by removing almost all traces of the original, bar a small snippet of slide guitar and some of the bassline, much to the delight of The Scream‘s Bobby Gillespie and Innes.

Primal Scream and Andrew Weatherall collaborated further on their Screamadelica album and created a record that still stands out as a high water mark of the era. We looked at the history of this record in some detail, as can be read here.

Screamadelica  became rightly famous for mixing the previous none-more-indie sound of Primal Scream with the sounds, beats and sensations of dance music, creating a new hybrid sound that was to dominate indie music for years to come.

When touring the album, Primal Scream took Andrew Weatherall on the road with them, as they wanted their gigs to be more like raves. Rather than finishing after the band left the stage, as was traditional, the Screamadelica gigs went on until the early hours of the morning, with Weatherall playing a set of techno and house stompers.

The tour called at Liverpool’s Mountford Hall and, on a personal note, I can still remember the ambition of combining a gig and a rave worked as seamlessly in a live setting as it did on Screamadelica. The old order had been overturned by the new and, for a while, it seemed that the efforts of people like Andrew Weatherall had changed the world.

I saw Andrew Weatherall again at Liverpool techno club Voodoo, where he played one of the most astonishing DJ sets I have ever witnessed. He somehow worked the sound of helicopters into the music and sent them round the room’s speakers, strafing the dancefloor with his eclectic, inventive approach to DJing.

He seemed always capable of surprising his audience, a rare talent indeed. In an industry where people made millions from sounding the same and becoming predictable, Weatherall became a beacon of individuality.

There has long been a torrent doing the rounds that collects over 250 of his remixes together in one folder. Just looking at the artists featured gives us some idea of the number of artists from different genres that wanted Weatherall to sprinkle his magic over their work.

There are remixes of Atari Teenage Riot, Beth Orton, Fuck Buttons, Noel Gallagher, Bjork, Grinderman, New Order and Spiritualized. Name us one other remixer that such a wide variety of bands wanted.

And if this isn’t proof enough of the sheer breadth of Andrew Weatherall‘s talent, just listen to these remixes. No two bands are made to sound the same, as happens with some big name remixers. Weatherall can strip songs down and build them back up again, but he was able to do so without feeling the need to bring his own ego to the fore of his work.

This lack of ego was also the reason he shunned the life of a famous DJ. He was more interested in creating music than creating a ‘career’.

Weatherall went on to make music under his own name and with Sabres of Paradise and Two Lone Swordsmen.

At Getintothis, we occasionally look at ‘lost’ albums that we feel have not had their fair share of success, despite them being superb albums. Personally, I have considered both Sabres of Paradise‘s Haunted Dancehall and Two Lone Swordsmen‘s Tiny Reminders for this feature.

Both are superbly eclectic, intelligent and, to be fair, bloody-minded albums that absolutely deserve to be heard and loved.

Tributes to Andrew Weatherall have naturally flooded social media. Liverpool born DJ Steve Proctor described Weatherall as being “informed and eloquent on such a wide range of subjects, and always with a particular fondness for the sleazy underbelly of whatever topic being discussed. A gentleman, a scholar and a Biker, all wrapped up in Dub

The only other remixer/producer I truly felt close to creatively and personally. He loved the fact that I was ‘there’ for punk (I’m five years older) and that we shared a love of electronic music long before ‘House’ came along. We shared interests in so many things outside of music as well, from Hell’s Angels to the beauty of the English Language. This has really hit me.”

Lauren Laverne posted “Absolutely heartbroken to hear about Weatherall. A wonderful person who contributed so much to music and British culture. The world is a poorer place today.”

DJ Darren Emerson said “Gutted .. Devastated.. Shocked. A legend . A true gent. Pioneer . Believed in me as a young DJ and got me to cover for him at the legendary Boys Own Weekender . You’ll be missed mate.”

Above all, Andrew Weatherall was a charming, innovative and highly influential musician. He will be much missed and much mourned.

Today we have lost one of the greats. Someone who touched and shaped our world and to whom we owe a good deal.

Sometime in 1996 I was in a familiar haunt, The Blue Note in London’s Hoxton Square.

I had DJ’ed and played live sets there myself, and it was home to some of the most interesting music of the time.

That night Andrew Weatherall was playing a surprisingly downtempo set and at some point he played a tune I knew – but I couldn’t place it. I was asking myself, why do I know this track so well?

Then it dawned on me, it was my own tune Armed Response – but played at 33 rpm rather than the intended 45 rpm.

At the time Andrew was getting hundreds of white labels a week, perhaps a day, but he’d taken time not just to listen to my tune, but to work out how it could be improved and to slot it into his set.

Although from that point we got to know each other and work together, that initial impression defined for me Andrew‘s incredible skill and humanity. He listened, he took the time and he cared enough to make it better.

Today I found out that I’d never be able to tell him the importance of that moment.

Over the years we got to know each other on nodding terms through mutual friends until we worked together on a show to launch Moine Dubh, a label he set up with Nina Walsh. That evening we were chatting and at one point I sarcastically referred to “the jazz in my soul”, to which he replied: “I always knew there was something fishy about you…”

Last year, when I was planning a launch party for the book I’d edited about the life, theory and practice of drummer Jaki Liebezeit, I contacted Andrew. I knew he was a fan, so just out of sheer cheek I asked him if he’d DJ at the event on the condition that he would restrict himself to only play tracks that Jaki had played the drums on.

Asking a world class iconic DJ to play at your event is one thing, but to tell him what to play is quite another – I hoped he’d appreciate the sheer chutzpah and we could laugh it off.

The reply was quite unexpected: “It’d be an honour.”

True enough, in November we were in Cologne and Andrew was playing the most mesmerising, seamless and perceptive set I could imagine from Jaki‘s discography. A couple of hours earlier in all the mayhem of running the event I was dashing down a flight of stairs backstage, only to find Andrew sitting there on a step. I was horrified that the star wasn’t being pampered in his dressing room and enjoying 4-star comfort, but he was happy where he was, unassumingly having a read in peace on the stairs.

The last time we met was in January. Together with mutual friends and the Jaki Liebezeit Foundation we were planning releases and shows based on the set he’d played in November – looking three years ahead. We had a long chat, strangely about health and how some people deal with death, thinking of Jaki and Bob Marley.

And now Andrew‘s gone too.

I hope these few anecdotes help to demonstrate a little of what was special about Andrew.

Self-effacing, funny, supremely talented in the interpretation of music, perceptive, sensitive to the collective feel of the audience, tenacious, and with that most British of qualities, unpretentiousness, Andrew was the epitome of the best of his generation.

Unlike others who fell into ego-fuelled traps of hubris, or fashionable departures from taste, Andrew maintained quality throughout his career and his life and is sorely missed.

I’d heard Andrew referred to as “the John Peel of his generation”. Now we must look out for the Andrew Weatherall of the next generation. A tough act to follow.