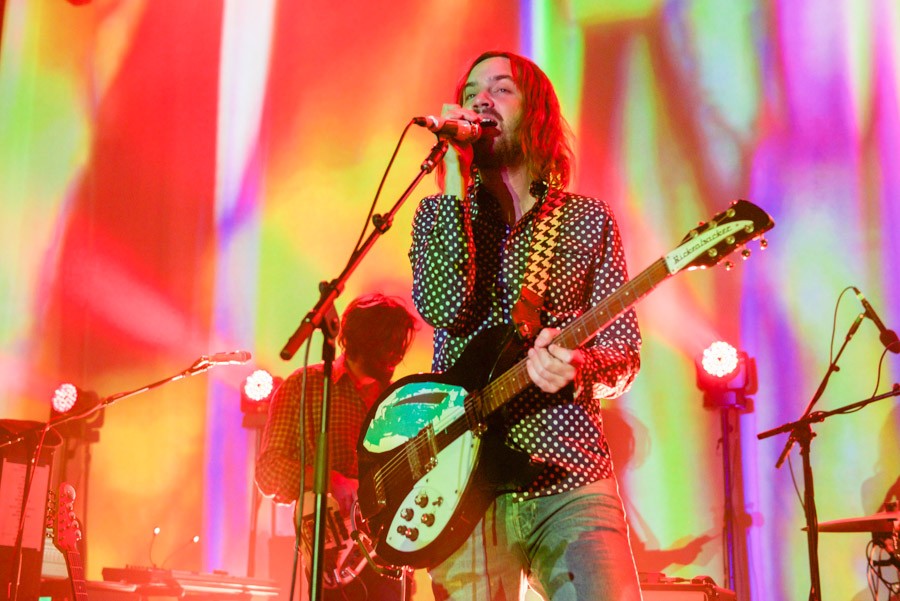 Tame Impala have been drip-feeding us singles throughout the past year or so, keeping fans excited and engaged in the long-awaited and much anticipated fourth studio album, the first in 5 years.

Getintothis first listened to this album on a train journey, unsuccessfully trying to conceal our excitement.

The album pretty much perfectly fit the trip from Birmingham to Liverpool, and was the perfect soundtrack to the rolling hills and the sunset lighting up the clouds with a pink hue. We doubt there is a better band to match such dream-like scenery.

Tame Impala songs can often take some listening. It is perhaps easy for listeners to find themselves initially underwhelmed during the first play, then, later on, catch themselves humming the tune throughout the day, the track leaving more of a lasting impression than first seemed to be the case.

This album is the perfect example of this, it’s definitely a grower.

Parker teased his fans with a stand-alone single in March of 2019, Patience, almost a year before the album was released, urging us to just trust in and stick with him.

The lyrics, ‘they ask me all the time … what you doing with your life?’ suggests he was under pressure to produce something new and exciting to succeed the release of Currents in 2015.

In an interview with Zane Lowe on Apple Music, Parker discussed how he got into music and how he finds his inspiration. His reply was “I’ll do anything that gets me inspired… anything that causes those lightning bolts, you know? As soon as I found music, I was like, “that’s me”, that’s my identity. It was like a rush of identity.

Tame Impala have had several incarnations over the years, both as a recording and live band. Nick Allbrook and Jay Watson belonged to Tame for a short while before exploring other avenues with psychedelic rock band Pond (the band in which Parker was a member and is still a contributor).

Tame Impala is now essentially a solo project, with Parker recording all vocals, instruments and being involved in all elements of production and a band joining him for live shows.

The Slow Rush was recorded between Los Angeles and Parker’s hometown of Fremantle in Australia. Both locations have recently been affected by vicious wildfires. In November of 2018, Parker posted to Instagram to tell his fans about how he had lost virtually all of his equipment besides one guitar and his laptop.

RIP to all this gear (and someone’s beautiful house) in Malibu. I made it out with my laptop and the Hofner. My heart breaks for the wildlife😞

Vice named Tame Impala Artist of the Decade for the 2010’s, writing “No artist captured how genres cross-pollinated throughout the 2010’s better than Tame Impala.

In the age of streaming and the big-box festival bubble, Parker’s discography seems factory-made for both a crowd of thousands and a chill night alone with a vibe-heavy playlist” and that “his music embodies the technology-driven sense of loneliness of this decade better than any of his peers”

The band are loved by many, and the above just about sums it up.

The album opens with One More Year, an upbeat track with a long intro. It seems to tell the story of talking to an unnamed recipient, reminiscent of Currents’ Past Life in both its music and lyrics. It’s an enjoyable song, but for an album that is subject to this level of anticipation it is perhaps not the strongest of openings.

Track 2, Instant Destiny brings it back to classic Tame, with Parker’s wistful high signature voice and sound effects building different layers. There has always been a set sound that they do not stray too far from, but we’re not complaining, it works for them.

There are several tracks that we’ve heard before, in Borderline, Posthumous Forgiveness, Lost In Yesterday and It Might Be Time.

Borderline is the oldest of the four, being released in April of last year and, after 10 months of listening to itit is still capable of sending chills down the spine. If you will excuse the cliché, this was the soundtrack to our summer, and here at Getintothis, we cannot get enough of it.

The album gives a slightly revised version but the sound is more or less the same.

Borderline leads into Posthumous Forgiveness, which was released at the tail-end of last year. The slightly-distorted guitar riff and accompanying beat that opens reminds me of one the bands’ biggest songs, Feels Like We Only Go Backwards.

While the music may seem to continue the Tame Impala journey, the vocals that top them move into new territory.

The song is split into two halves, and, at over 6 minutes long, could be mistaken for two separate songs.

Posthumous Forgiveness is largely addressed to Parker’s deceased father and details his process of dealing with grief. The first part is angry at his father for leaving, whereas part two moves towards acceptance and forgiveness, as the title would suggest.

The end of the song is child-like in its yearning and excitement (“Wanna tell you about the time I was at Abbey Road … had Mick Jagger on the phone”).

Breathe Deeper wouldn’t feel out of place in the charts on a mainstream station, such as BBC Radio 1. This is the kind of song that suggests maybe they are stepping out of the comfort zone a little, in creating a shift in direction. The beat makes it hard not to want to dance along.

Tomorrow’s Dust is a soft song, with clear guitar strumming that is reminiscent of Hendrix. It slowly moves away from this, with the beat and synthesiser rising to bring the sound back to Tame’s typical formula.

On Track slightly misses the mark. The song is enjoyable but easily forgettable compared with some of the stronger tracks on the album. Tame Impala have set their bar high.

One aspect that makes the song interesting is the panning, something Parker has used frequently in songs in the past. It gives a sense of distortion and adds layers to the music, especially when listening through headphones.

Lost In Yesterday is a stand out track.There are genuinely no negative words to say about this song, it has catchy hooks and a stomping beat.

The track received some backlash on BBC Radio 6 Music for how summery it was, something that should be a soundtrack to beach days and sunshine rather than the storms we’re currently experiencing in the UK.

Yes, this is a summery album, but is that really a reason to criticise it? We have to remember, the locations the album was recorded and produced were enjoying high summer and naturally the album reflects its environment.

Is It True steps into new areas and provides us with a different sound. It is captivating and addictive, a disco tune about love and promises.

Track 10 is It Might Be Time, the last of the singles. The songs we are familiar with being peppered throughout the album is a nice feature, occasionally it can be a little overwhelming to listen to a whole new album and pay attention to all of it in the first listen.

The already released singles act as a little break in between the unfamiliar ones, where you have the chance to sing along to something you know.

It Might Be Time was released in October 2019, and discusses changing times and not feeling quite as ‘with it’ as you once did, saying“It might be time to face it, you ain’t as cool as you used to be”, “Nothing lasts forever”

This is a message that many people can relate to, looking back on your past and feeling disconnected and out of place – and telling yourself to stop chasing the past and focus on the future.

The single has been likened to another one of Parker’s huge hits, Elephant, due to its distinguished beat and heavier sound.

Parker told the New York Times last year, “A lot of the songs carry this idea of time passing, of seeing your life flash before your eyes, being able to see clearly your life from this point onwards. I’m being swept by this notion of time passing. There’s something really intoxicating about it.”

Glimmer is the shortest song on The Slow Rush and is more of an instrumental – similar to those found on previous albums à la Endors Toi, Sestri Levante.

In contrast to this, the album finishes with the longest song, (one of Tame’s longest ever), One More Hour. The track is hypnotic in its music and, even at 7 minutes long, leaves us wanting more. It wraps up the album and is an exciting taste of what is to come.

Come summer, these new additions to the Tame Impala cannon are pretty much guaranteed to get the festival crowds on their feet and on Parker‘s side.

With a back catalogue as strong and successful as Tame Impala’s, new releases will always present a challenge and give publications like our own a reason to turn the spotlight on their new music.

But judging by the reaction The Slow Rush has met with this far, it will sit comfortably into one of the most loved discographies of recent times.