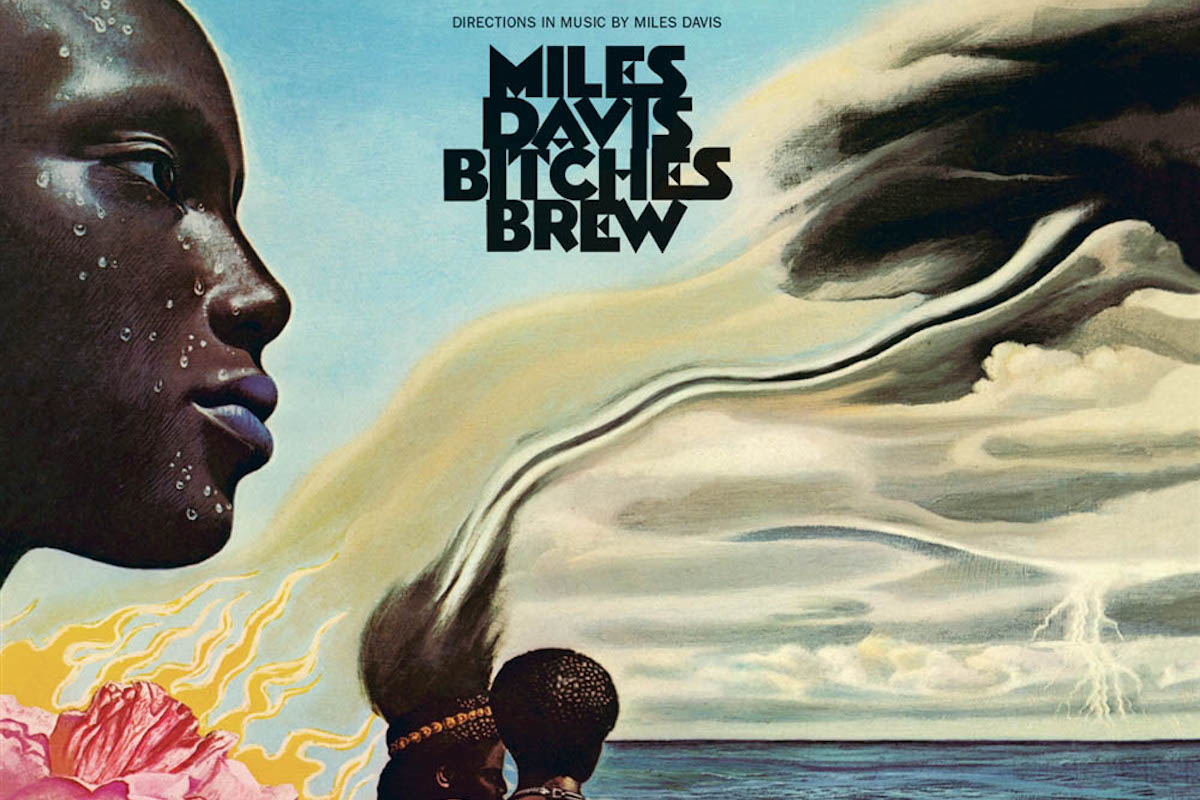 As Bitches Brew gets ready to celebrate its fiftieth anniversary, Getintothis’ Jono Podmore reflects on how this album became one of the most formative pieces in jazz history.

“it’s all in there, the beauty, the terror and the love, the sheer humanity of life in this incredible electric world which is so full of distortion that it can be beautiful and frightening at the same instant.” – Ralph J Gleason, from the original sleeve notes.

Miles Davis‘ Bitches Brew is a big album in every sense.

A big statement from one of the leading voices in African American music at the time. A double album with the first 2 tracks covering the entirety of sides 1 and 2 and a complete running time of over 90 minutes.

It’s a big band too with multiple drummers, bass players and electric pianos and percussion.

Over the following 50 years this scale has only added to the album’s monumental status. It’s like a monolith, a point from which so many other strands in the music that came after are measured: jazz-rock, funk, fusion, rock, hip-hop and acid-jazz… New techniques both in playing and composition, new technology and most of all a new attitude became a starting pistol for so much of what came after.

The heart of the innovation here is the groove. There is a constant driving pulse throughout the whole album. That’s not to say the drums are clatteringly loud, or that there is an RnB back beat, but the whole thing pulses rhythmically with all the players locked on the pulse.

This had many precedents, but not in jazz.

In fact much of the jazz world was still exploring the Free Jazz of Ornette Colman, where repetition was frowned upon. Outside of jazz, the rock world was opening up to non-European music, particularly Indian Raga and endless groove workouts.

Miles Davis: Birth of the cool soundtrack, including new track

Terry Riley‘s In C had been around for over 5 years. All this was not lost on Davis, and neither had the drugs passed him by.

Bitches Brew is a trip. It’s a dark and complex acid fuelled ride. The psychedelia of the decadent, white West Coast reimagined in the minds of the intellectual vanguard of African American experience.

The grooves on the album provide the propulsion through wave upon wave of catharsis and psychedelic exploration.

But it didn’t just appear from nowhere.

The album In a Silent Way preceded Bitches Brew by a year and in retrospect all the seeds are there: the electric instruments, edits, effects and the core of the band had also formed.

Where Bitches Brew differs is the attitude – the sense of a fearless trip into the unknown, through the darkness into, perhaps, the darkness. One of my favourite aspects of the album is the warm, sonorous and at times decidedly sinister flavours of Bennie Maupin‘s Bass Clarinet.

This is genius arrangement as it drives own Davis‘s trumpet into higher, edgier even aggressive registers, getting closer to losing that cool he’d spent the whole of the previous decade developing.

Bitches Brew also unleashed the studio as a musical instrument. Techniques we take for granted today: tape loops, tape delays, reverb and echo effects were pioneered by producer Teo Macero on this album.

The effect is not only to expand the sound world into new and trippy territory, but to also liberate the musicians from the restrictions of form and structure.

They could improvise on the groove and the harmony Davis had given them for hours if necessary, then the structure of the piece was created afterwards with masterful edits from Macero with Davis at his side.

This undermines so much of what defined jazz at the time. Time honoured structure and arrangement out of the window.

Macero was classically trained and was aware of the tape manipulation techniques of musique concrète, but using loops, hard edits, overdubs and delays as part of the composition, to actually arrange the track with the tape itself, was new to jazz.

Macero wasn’t shy with it either – there are over 19 edits in opening track Pharoah’s Dance, some shockingly obvious by today’s standards.

This was only possible with a solid and constant pulse in the music so that the edits don’t jump between sections with different tempi – which makes edits very obvious and can kill the energy in a track. It only works if the drummer locks tight.

Using tape delay on the trumpet had a big impact on Davis‘s playing too – timing his phrasing to work with the repeats in the echo and playing with the harmony of the notes sustained in the echo.

The combination of the musical, technical and cultural innovation on this album makes it the milestone that it is: a launch pad for so much music that came after.

The constant inventiveness in the players seems to be in response to the sense of being in fresh territory – terra incognita – the novelty bringing wonder, freedom but also fear.

Put the time aside to listen to this album in one sitting and you’ll emerge on the other side energised and enriched and ready for new challenges.