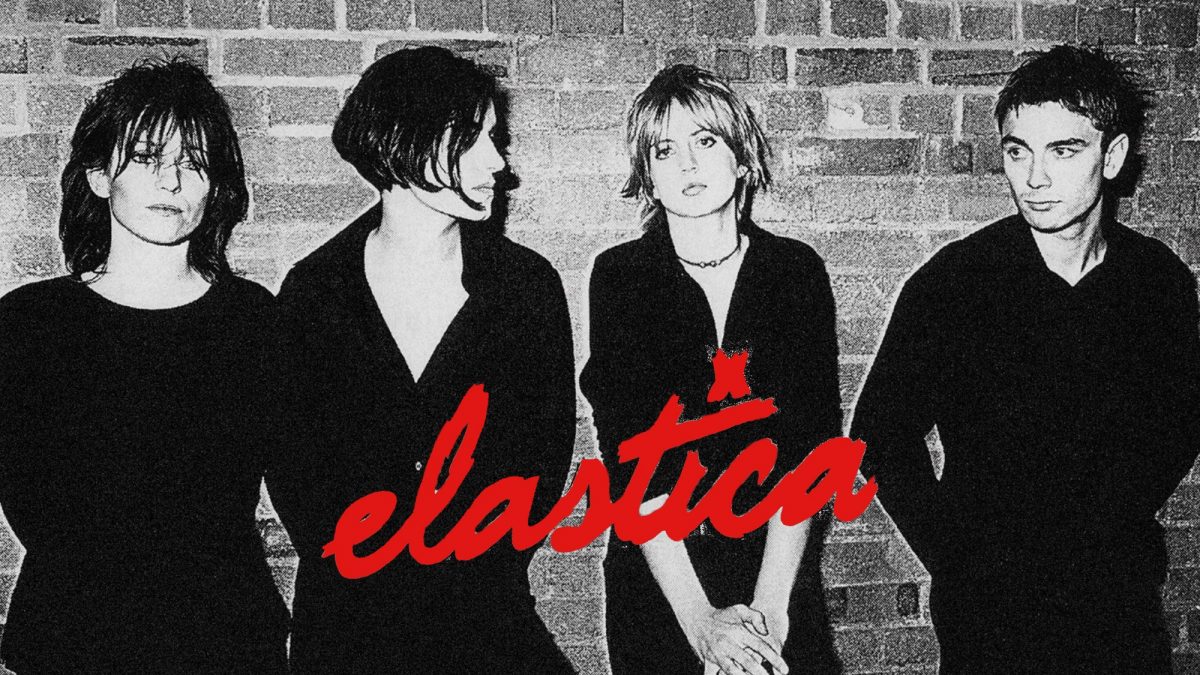 As luck would have it Elastica’s first ever gig was in my local.

On May 7, 1993, they appeared at the Windsor Old Trout under the name ‘Onk‘ supporting cult US alt-rockers Trumans Water. Sadly I wasn’t there.

But I was there a few months later when the newly christened band (alternative names had been Kirby Grip, Dad and Spastics Society) supported Blur at the same venue for a pre-Reading Festival warm-up.

It remains one of my favourite ever gigs. Jarvis Cocker was in the audience (I still have my autographed ticket) and Blur were on the cusp of greatness: beginning to introduce songs from the all-conquering Parklife while coalescing the sound and ideas of Britpop with Modern Life Is Rubbish.

First on however, were Elastica.

Those of us in the know (avid NME readers basically) had already begun to hear rumours of this band which were led by Albarn‘s beautiful, posh girlfriend who used to be in Suede.

Seeing them in flesh was a different matter. Not only were Elastica led by a woman but they had an all-female front line. Annie Holland was on bass while the arrival of doe-eyed beauty Donna Matthews on guitar ensured Justine Frischmann’s notion of creating a girl group with a difference was made concrete.

The presence of Justin Welch, another ex-Suede member, ensured Elastica felt like some kind of indie supergroup. The Wonder Stuff this was not.

Then there were the songs.

Since leaving Suede, Frischmann had plotted her next move around a band that were a reaction to the sweeping opulence and doomed romance of Brett Anderson and Bernard Butler‘s writing (“I thought life didn’t have to be that dramatic”, she said).

The musical references were different too. Where Suede looked to Bowie and Scott Walker and Blur to the Kinks, XTC and Madness, Frischmann had discovered Wire, the Stranglers and Adam and the Ants.“I found their Peel Sessions album, which was virtually a manifesto”, said Frischmann.

These influences came out in a superb set of songs – full of Frischmann’s louche deep vocals and Matthews’ angular guitar lines. Melodic, punky and often less than two minutes long the likes of Vaseline and Stutter spoke explicitly about the ups and downs of sex.

The fact that this was sex being had with Damon Albarn made it all the more interesting.

Stutter was released as Elastica’s first single on November 1 1993. Limited to just 5,000 copies, all pressed on 7-inch on Radio One DJ Steve Lamacq‘s Deceptive label, it seemed to designed to raise the hype even more.

The accompanying video showed the band dress all in black in front of a white backdrop. There was no doubt it – Elastica looked cool and they knew it. “I can’t think of anything better than 16-year-old boys wanking and looking at a poster of me,” said Frischmann in her first NME interview.

Elastica’s second single, Line Up, arrived in January 1994. Another sexually explicit song, this time about groupies (“she loves to shine their shiny guitars”) it became the band’s first hit, reaching number 20 on the UK charts. The tune’s razor sharp guitars and jerky rhythm made it stand out again from what was beginning to be stereotyped as ‘Britpop‘, The truth was it couldn’t have sounded more different from the kind of fare Oasis were about to unleash on the music buying public, something Frischmann was at pains to point out (“I thought Oasis were dreadful. They looked crap, sounded really uninteresting. One of them was bald,” she said).

Following the release of Line Up, Elastica laid low. It was a great tactic as during the six months that passed before they resumed performing and interviews, anticipation grew and grew for what their debut would bring.

Frischmann’s industry know-how was impressive given her experiences with Suede and by association, Blur, and there was no way Elastica where going to get their timing wrong.

In October 1994, they released Connection which probably remains the group’s best known track. Its blatant steal from Wire’s Three Girl Rhumba meant nothing to the hoards of Britpop teens who sent it into the top 20. Steamy, aggressive and sexual it remains one of the finest singles of the era.

Elastica’s debut album finally came out on March 13, 1995. Sounding more like a greatest hits collection (it included all four of the singles), its 16 songs sped by in a little over 40 minutes. It was full of all the elements that made the band and Frischmann’s writing so alluring.

Car Song saw her extolling the virtues of sex on the backseat (“I love it in a motor”) while Never Here was an incredibly affecting resume of her failed relationship with Brett Anderson. Waking Up was another pop smash which troubled the lawyers of Frischmann’s beloved Stranglers. The wait for the album had worked too.

In its first week, it hit number one on the UK Album Charts becoming, at the time, the fastest-selling debut since Oasis’ Definitely Maybe the previous year. Frischmann must have loved that.

Perhaps more extraordinarily, two months after its release, it had sold over 59,000 units in the and by the end of 1995, it had sold approximately 1 million copies worldwide according to Billboard. For a short time, Elastica could argue they were the biggest Britpop band in the world. Frischmann must have loved that too.

Elastica’s consequent messy demise has made all this easy to forget.

Frischmann herself split from Albarn in 1998 and now lives as a painter in the US. “I don’t really have any desire to make music, to be honest,” she said in 2016. Matthews, Welch and Holland all struggled with drug addiction issues but a pleasing photograph of them all looking fit and well appeared in 2017 when Rough Trade re-released a remastered edition of their debut.

Fans’ hopes this might spark a reunion were roundly dashed by Frischmann, who told the Sunday Times she had considered reforming Elastica after her old friend MIA asked her to appear at her Meltdown Festical in London: “I was actually surprised I was even tempted. I’ve never felt tempted before.”

Welch has continued to work as a drummer, both as a teacher and with various bands – including a stint helping his old band Suede in 2013 and with the reformed Lush in 2015. Matthews continues to make music under her own name, and works as a Christian missionary to the homeless.

Another photo of Elastica at Abbey Rd this week (no @thefrisch of course!). pic.twitter.com/cHyUL8edEd

Listening to Elastica‘s debut album today, it’s remarkable how well it has aged.

While so much from that era is impossible to separate from mid-nineties touchstones, Elastica remains a timeless gem, full of almost perfect pop-punk and a genuine thrill of excitement that came from the knowing confidence and clever hooks Frischmann filled her songs with.

Perhaps 25 years on from its release, that day has come.