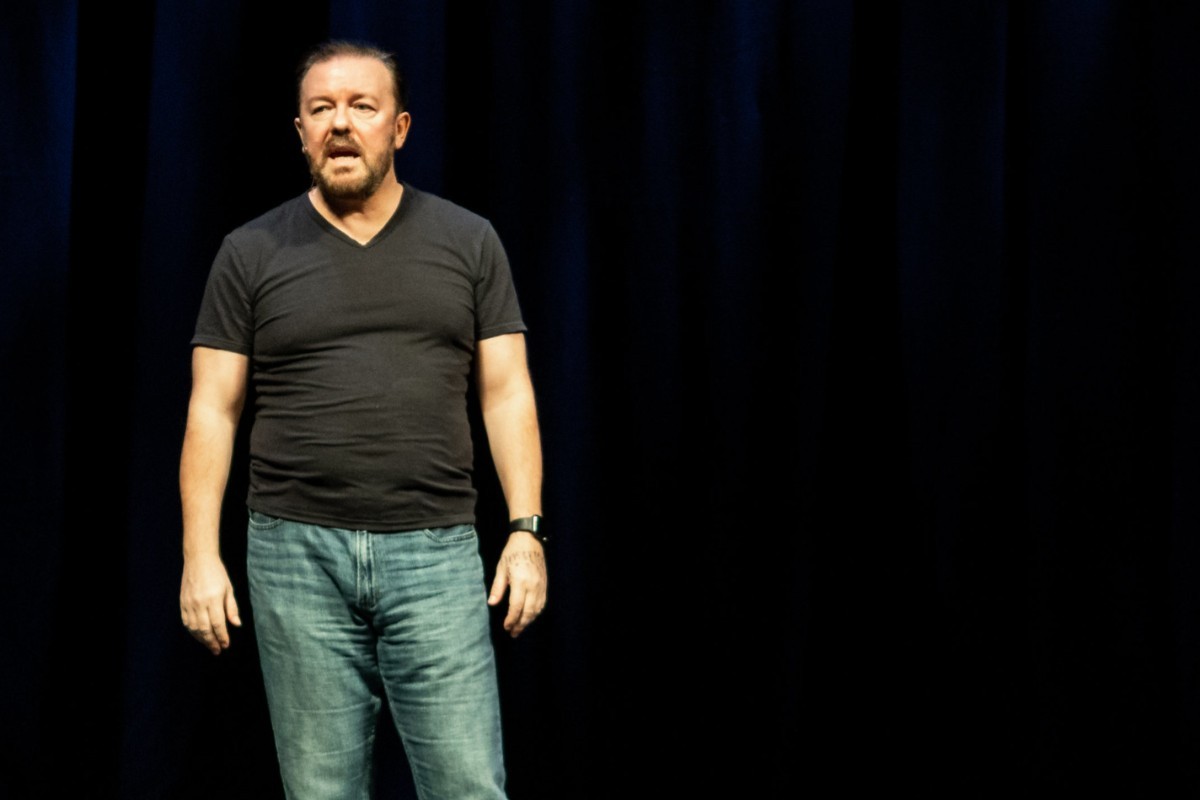 Ricky Gervais redefined comedy but reliance on controversy means the funny days are over, Getintothis’ Nathan O’Hagan charts the decline.

When Ricky Gervais first appeared on our screens as part of The 11 O’Clock Show in roving reporter style skits (think of a more laddish Paul Crone), he was probably the funniest part of a show that was, overall, not all that funny.

Most of Gervais’ clips were him going off on politically incorrect tangents, occasionally using terms like ‘queers’ and making jokes, in one form or another, about ‘the disableds’.

It was decent satire, but a shtick that became tiresome pretty quickly, and it was easy to dismiss him as being about as funny or insightful as the average coked-up pub loudmouth.

So when he pretty much redefined British comedy forever with The Office in 2001, more than a few of us were surprised. With just two series and a Christmas special, Gervais and co-creator Stephen Merchant breathed new life into the British sitcom, and yet simultaneously went some way to killing it off, as half of the new sitcoms on TV in the decades since have been poor attempts at emulating The Office template.

‘Oh,’ we all thought after that first episode, loaded as it was with cringey, awkward interactions and pathos, as were all subsequent episodes. ‘He’s not just a gobby twat. That was just a persona. He’s actually a comedy genius.’

Gervais and Merchant showed this wasn’t just a freak occurrence with two series of Extras.

While certainly neither as groundbreaking or as funny as The Office (what could be?), Extras was still brilliant comedy, and, like The Office, found the humanity within a lead character that was at times hard to like.

Cemetery Junction, their debut feature film, received lukewarm reviews, but, while not a classic, it is an enjoyable snapshot of a Britain in transition, and it certainly deserves a revisit.

The Office and Extras were so successful in no small part due to the emotional intelligence on display.

Over the course of The Office, we went from ridiculing Brent to loving him, and as well as the superb writing, that is largely down to Gervais’ portrayal.

So how he went from that, to his portrayal of Derek, a good-natured man with learning difficulties who helps out in a nursing home, is anyone’s guess.

His characterisations leaned on every negative stereotype about people with learning difficulties you can imagine. Crap clothes? Check. Jaw jut? Check. Greasy hair in a crap side parting? Check.

I worked as a support worker with people with learning difficulties for several years, but you don’t need to have done that to realise that the spectrum of personality traits they possess are as wide and varied as anyone else.

No, to realise this, you just need to not view them with contempt.

Maybe Gervais genuinely thought his portrayal was sympathetic, but it couldn’t have been more regressive if he’d pushed his tongue inside his bottom lip, waved his arms around, Donald Trump style, and gone ‘hnnnyyuuurrr’.

The portrayal of Derek’s apparent disability was the only thing more offensive than the mawkishness and sentimentality of the show.

The dichotomy between Brent and this would be astonishing, until you remember that this is a man who has often used slurs like ‘mong’.

It was also the first example of Gervais’ fans having acolytes’ devotion to him, regardless of the quality of his work, or the crassness of what he says. I was stunned at just how bad Derek was, but even more stunned by the outpouring of praise for it.

The fact that Derek was the first series Gervais had created without writing partner Steve Merchant may or may not be significant, but the fact that it was the start of a huge dip in the quality of his work, with Special Correspondents and the hugely overrated After Life suggests otherwise.

In fact, the only time he has got close to his David Brent peak in recent years is when he revisited the character for Life On The Road.

Most great artists have some sort of dip at some point in their career, but the peculiar thing with Gervais is the correlation between this dip, and the escalation of his attempts to portray himself as some sort of free speech martyr.

‘Offense is the collateral damage of free speech’, he has also said, failing to understand that, while there is undoubtedly an element of the ‘woke’ movement that is utterly devoid of humour and really do believe you can’t say or joke about anything even vaguely controversial, the vast majority of people to whom that now pejorative label can be attached absolutely believe in free speech.

They just believe people should examine their motives for saying things, and that they should also understand they are accountable for what they say.

Ricky Gervais: After Life, and why he should stop doing comedy

But his portrayal of himself as the last bastion against a suffocating tide of political correctness hardly fits when you consider that we’re talking about a man who has repeatedly been asked to host the Golden Globes awards night, despite (?) repeated provocative remarks.

So this is a hugely successful white male comedian, complaining about the inhibiting of free speech, while being paid a shitload of money to say exactly the kind of things he claims you’re not allowed to say anymore, to an audience of millions.

It’s really not that daring or original to go on stage and make Tom Hanks or Helen Mirren squirm. There’s a long list of award show hosts who’ve done exactly that on multiple occasions, and yet they don’t feel the need to position themselves as a free speech warrior.

But it has now become central to Gervais’ brand to portray what he’s doing as seminal in the fight against outrage culture, when what he’s doing really isn’t that outrageous. It’s exactly what he’s been booked and handsomely remunerated to do.

Gervais’ recent stand-up show Humanity was an occasionally funny stand up set, after which he was accused of transphobia due to a lengthy segment where he focused on Caitlyn Jenner.

I’m firmly of the school of thought that there is little if anything that is off limits when it comes to comedy, and Gervais’ defence that his joke about Jenner at the Golden Globes wasn’t transphobic because Jenner’s gender wasn’t the target of the joke has some validity.

But his tangent about identifying as a chimp was appallingly unfunny, which is perhaps the only genuinely offensive thing a comedian can do.

Some of the greatest comedy has caused offence and made people feel uncomfortable, and the best contemporary comedians continue to do it.

It’s good to see people squirm in their seats a bit, even, or maybe even especially, when it’s wokey blokeys like me. But, if you’re setting out to make people uncomfortable then being funny should be a minimum requirement.

But Gervais has now long since crossed into that realm where he’s no longer all that funny, and is relying solely on controversy for controversy’s sake.

Look at his live joke about a girl coming home to her dad to tell him about being attacked in the park, and her dad encouraging her to make up more detail so he can wank over it. This is what passes for edgy modern comedy?

It’s not the ‘offensiveness’ of this joke that is the problem, it’s how comedically inept it is. That joke has been doing the rounds for as long as I can remember. The first time I heard it was when I was working in a factory as a teenager, and the fella who told it had picked it up in prison.

This is not breaking taboos. This is Chubby Brown without the daft goggles.

Look at some of his recent tweets: ‘disagreeing with me is hate speech’ and ‘Whenever I’m abroad, I make sure I only speak English. To use a foreign language would be “cultural appropriation”, and that’s racist’.

This is about as funny as a bloke with ‘leave means leave’ in his Twitter bio, a union flag profile picture and a pinned tweet that claims he ‘identifies as a lamppost’.

Yeah, edgy and daring as fuck that is, Ricky.

Maybe it’s the level of fame he’s reached that brings this level of delusion that people who criticise him are trying to crush his rights to free speech, rather than simply using their own free speech to point out that he is simply a bit tiresome and maybe isn’t that funny anymore.

In their opinion, of course.

Nothing he says or does now can ever diminish the genuine genius of The Office, and I’ll continue to watch that, and Extras, whenever I have the opportunity, because it remains as funny now as it was then, and it wouldn’t be fair to condemn the man for not managing to be as funny as that since.

After all, the vast majority of us won’t get within a million miles of being that funny even once.

But the last few years have begged the question whether Gervais’ 11 O’clock Show shtick all those years ago was actually a shtick at all.