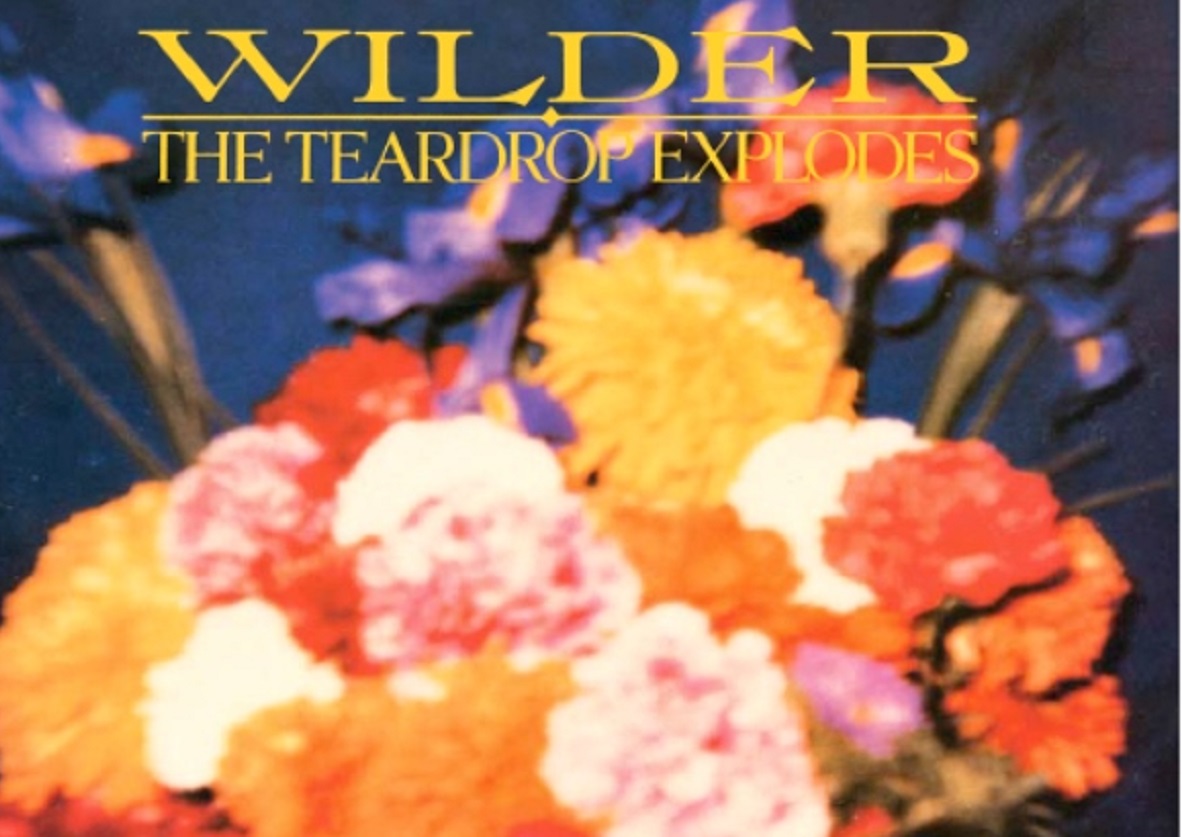 As part of our Lost Albums series, Getintothis’ Banjo looks at the strange story of The Teardrop Explodes’ second album, Wilder.

The post punk boom of the late 70s and early 80s made stars of some strange people.

Marc Almond bringing high camp to Top of the Pops, Phil Oakey appearing in Jackie magazine with a chain between his two pierced nipples and Adam Ant displaying his Pure Sex tattoo to theatres full of young fans are but three examples of how punk sensibility clashed with a world not quite ready to take it all in.

We can add to this Julian Cope standing on a piano, tripping his face off and wearing a night shirt on Top of the Pops, with The Teardrop Explodes.

There is a sense with all of these of square pegs in round holes, of people perhaps not immediately cut out for mainstream fame bringing their baggage with them.

And none more so than the archdrood himself, Julian Cope.

When they first started, The Teardrop Explodes were a fine, if slightly odd, band formed in the embers of the punk scene that had raged through the UK.

Countless bands were inspired by the likes of Sex Pistols and The Clash to pick up guitars and make music of their own.

The post punk bands covered themselves in glory was by refusing to follow the path of identikit thrash that was well trod by second and third generation punk bands and by applying their emerging musical abilities in a new and different way.

These bands had an innate desire not to follow the crowd. This led to some of the most wonderful music we will ever know being committed to vinyl by bands who were not interested in fame or its trappings, doing what they were doing out of a need to create.

It was in these post punk groups that the true spirit of the explosions of 76/77 bore fruit.

One of these bands was The Teardrop Explodes.

Formed around the triumvirate of Eric’s, Probe and the Armadillo Tea Rooms, Liverpool bands sprung up regularly, often lasting no longer than a day or two. Eventually though, some of these bands left the tea rooms for the rehearsal rooms and actually started writing songs.

Iggy Pop at Eric’s, a personal reflection on the anniversary of an incredible gig

On its release, Sleeping Gas was awarded Single of the Week in the weekly music papers. Suddenly The Teardrop Explodes found the spotlight shining on them for the first time.

Further singles Bouncing Babies and Treason were released and The Teardrops were one of Liverpool’s brightest hopes. However, success eluded them and their rivals Echo and the Bunnymen signed to a major label and left Julian and co behind.

It wasn’t until fourth single Reward went top ten that it seemed to be time for The Teardrop Explodes to have their own chance at the big time.

Treason was subsequently re-released and made it into the top twenty, and The Teardrop Explodes became pop stars.

Lacking a stable line up, Julian Cope became the band’s face and focus, essentially employing and firing a series of players who were little more than session musicians.

Drummer Gary Dwyer was the only other continuous member of The Teardrop Explodes, and deserves great credit for his part in their story and for being the prop that held the band up when falling apart may have seemed inevitable.

Debut album Kilimanjaro gathered rave reviews and it seemed that everybody loved The Teardrop Explodes. What could possibly go wrong.

Well the answer to that is pretty much everything.

Pop fame sat uneasily on Cope’s shoulders, and he took to consuming huge amounts of LSD and isolating himself. An American tour came to a messy end when Cope sacked most of the band, including fan favourite Alfie Agius.

By now he had a reputation approaching that of Mark E Smith when it came to the ruthless way he dealt with band members.

Nevertheless, anticipation for the Teardrop’s second album was so high that Cope had wanted to call it Everybody Wants To Shag The Teardrop Explodes.

Eventually called Wilder, it was in part designed to turn off The Teardrop Explodes‘ new audience of pop fans.

There is still a rich vein of Cope’s love of classic pop running through Wilder, but it has an angular, awkward and arty approach that belied their status as staples of Smash Hits magazine.

Opening track Bent Out of Shape is a straightforward enough song, but underpinned by some strange noises. It opens with Cope singing “All my life I’ve been bent out of shape, can’t you see it’s killing me’ adding “these are dreams that I never had” as if he has already had enough of the fame that had landed at his feet.

Next up is Colours Fly Away, starting with a brass band section that harks back to the glory days of Reward. Fans could be forgiven that The Teardrop Explodes have picked up from where Kilimanjaro left off.

But again, the opening lines show Cope’s unease with his success: “More by luck than judgement here I am, smiling at the fighting once again.”

Seven Views of Jerusalem is a jumble of beats and squawks with Cope seemingly in stream of consciousness territory, singing “I cut off my nose to spite my face, look at all pests around the place. Everyone’s laughing they think it’s disguise, but haven’t you seen all the lines round my eyes”

Lyrics such as these seem a long way from the same person who burst into the public’s affections by singing “Bless my cotton socks, I’m in the news”

Pure Joy is trite and throwaway, but next track Falling Down Around Me is one of the album’s highlights.

Built around a stuttering mix of bass and drums that seem to have little in common with the guitar track, the song has echoes of David Bowie from his early days, in particular the World of David Bowie album that was so popular amongst the Liverpool post punk cognoscenti.

The Culture Bunker is classic Teardrop and references Cope’s early days in Liverpool as he mentions The Crucial Three, the band he started with Pete Wylie and Ian McCulloch, as he sings “I’ve been waiting so long, waiting for The Crucial Three, wondering what went wrong”

Passionate Friend is another classic. Apparently written for Ian McCulloch’s sister, thus deepening the rift that had grown up between the two onetime friends.

The rest of WIlder gets darker and odder. Reading them back now, some of Julian‘s lyrics seem to be as dark and confessional as those from Ian Curtis.

Tiny Children takes things down several notches and casts Julian as a lonely figure writing his disquiet and depression down for us all to read.

Listeners to these emotional admissions can almost  feel guilty, as if we were sneaking secret glances through somebody’s diary.

Like Leila Khaled Said further details an unhappy outlook, for some reason juxtaposed with Leila Khaled, member of the revolutionary Popular Front for the Liberation of Palestine and the first woman to hijack a plane.

And The Fighting Takes Over continues the downbeat, introspective theme still further, reading like an examination of Julian’s failing marriage in a sad but blame free manner, concluding “we were just a pair of little children, two children, no surprise”

Lost Liverpool #16: Club Zoo and The Teardrop Explodes going off the rails

Closing track The Great Dominions is perhaps the greatest The Teardrop Explodes song recorded, an open-hearted epic that again seems to look at a crumbling marriage.

The band provide a sympathetic backing as Julian pours his heart out in his own symbolic manner.

The Great Dominions reads like the aftermath of a long and emotional argument, with Cope singing “Suddenly, I came to my senses. A night on fire put out all traces of feeling”

The ending refrain saw Julian singing naked in a dark studio, his voice cracking as the tears finally came towards the end of the repeated line “Mummy I’ve been fighting again”.  As he breaks down, the song climaxes around him.

As emotional as this is, it is difficult to see that the young fans who bought Reward would take to this tearful soul bearing with the same enthusiasm.

Of course, the post punk fans that the band had brought with them were more than able to love the sounds they found on Wilder, it was the pop fans that might have found it a more challenging listen.

Cope’s aim was not to make difficult music, but to shake of his teenybopper image, a mantle that it is easy to imagine not sitting well on his shoulders.

Before the band could finish their third album, it was all over for The Teardrop Explodes.

They remain one of the bands who have never reformed and probably for good reasons. Theirs is a tale that has too much depth, too many messy relationships and involved too many bad trips.

But, despite Wilder perhaps starting the death knell of one of post punk’s greatest bands, it is a mighty statement and one that deserves returning to.

A pop star who is prepared to open himself up to his public in this manner is a rare thing. We are reminded of the troubled output of Syd Barrett and Tim Buckley, but presented in a pop arena.

Wilder is a bloody-minded and honest look into the downside of success, when all The Teardrop Explodes had to do to ensure their continued triumph was to put on a happy face and smile for the pages of the pop glossies.

And as such, it is one of the bravest documents a band hungry for fame have ever committed to tape.