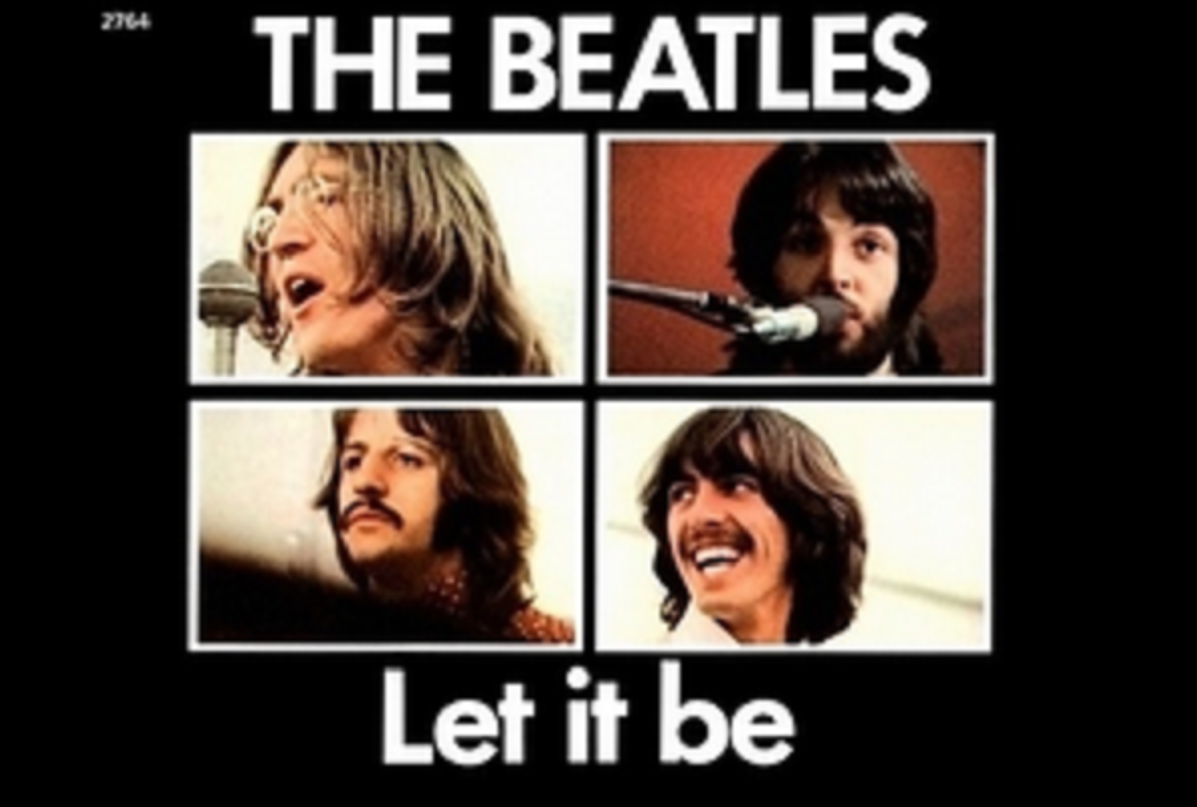 The Beatles’ Let It Be

As The Beatles’ final studio LP Let It Be turns 50 years of age, Getintothis’ Max Richardson presents some thoughts on the legendary album.

Of all the studio albums by The Beatles, I think it’s fairly safe to say that most people can agree that Let It Be is a bit of an outlier in many ways.

By this point, the teenage heart-throb image the group had for their first few albums is comfortably dead and buried, but it seems that so too is the new, experimental style unleashed as a by-product of Sgt. Pepper’s Lonely Hearts Club Band.

The lack of a requirement to perform their songs live meant that The Beatles were able to focus on creating music in the studio, free from any worrying about how to perform these tracks in a live setting.

Combine this with the rise of psychedelia and it’s clear that much of the music of The Beatles from around these years was created with no regard as to how it would ever be performed live – meaning they were able to work more freely with instrumentation.

Seriously, take a listen to tracks like Being For The Benefit of Mr. Kite! from Sgt. Pepper’s, and picture how on earth you’d be able to perform that live in the 1960s – with no digital backing tracks or synthesisers.

Let It Be started as an LP called Get Back – intended to mark the start of a new era for the group, and with it a return to live performances being pushed along by Paul McCartney – one of the key reasons for much of the sound of Let It Be.

Get Back was planned to accompany a documentary film of the same name, which was to detail The Beatles‘ return to live performance with rehearsal footage and studio tracks.

Eventually, both the film and the album evolved into Let It Be, as a result of Lennon’s departure from the group in 1970 alongside the band’s dissatisfaction with the recorded material for the album.

Interestingly, the film of Get Back has now been resurrected by Lord Of The Rings filmmaker Peter Jackson, and is set to hit cinemas in September, all being well.

Let It Be was born from the compilation of material recorded for Get Back alongside earlier recorded tracks such as Across The Universe, and straddles a line between studio album and compilation.

A return to live performances meant that the music created was designed to once again be performed live, meaning that the group were not quite as able to freely experiment with their choices of instrumentation as they had been in their previous few records.

Songs like Two Of Us and Get Back are largely free from overdubs and the usage of studio trickery; instead falling back on the style of the groups earlier works, with more of an emphasis on guitars rather than overdubbed instruments recorded in the studio.

Many of these songs are indeed easier to picture being performed live compared to tracks from Magical Mystery Tour or The White Album. We’re back in the realm of rock ‘n’ roll, heading away from the influence of psychedelia.

At least, that’s the style of half the tracks of the album, until along came producer Phil Spector.

For an album designed in part to be performed live, tracks with thick production elements such as The Long and Winding Road really don’t seem to fit into that mould, for better or worse.

The orchestral elements in these tracks are infamously divisive, having been criticised by George Martin and Paul McCartney –  with McCartney having gone so far as to push for the release of Let It Be… Naked back in 2003 with Spector’s embellishments removed.

On the contrary, Spector’s production undeniably boasts its own fans, including among them George Harrison and Ringo Starr. It does feel a little strange, however, to jump between fairly sparse, guitar driven tracks designed in part for live performance, and epic orchestral ballads.

Of course, this isn’t to say that Let It Be is a bad record at all, on the contrary, it’s got some of The Beatles’ best work on – including tracks both with and without the lavish ornamentation favoured by Phil Spector.

The Beatles’ Abbey Road: the making of a masterpiece

Much of the charm of Let It Be is a result of just how candid the album is. This is a record with the hearts and souls of The Beatles poured into it, perhaps more-so than any other album recorded by the group.

And of course, there’s the notorious tension that plagued the recording sessions – which were marred by the brief departure of Harrison alongside the fracturing relationship between Lennon and McCartney.

It almost seems that this tension is audible in Let It Be, yet it’s interspersed with moments verging on the comic, such as the final track of side 1, Maggie Mae, an arrangement of a traditional Liverpool folk song.

The album’s lack of stylistic consistency is no doubt a reflection of the state of the band during the recording of the record – with the fractured relationships of the band leading to an album where it seems nobody was quite sure what they were supposed to be creating.

This is also hinted towards by the band’s dissatisfaction with the record, with original LP Get Back going back and forth between producer and band for two years before the group agreed on a suitable release – by which time they’d managed to record Abbey Road, and Lennon had left the group.

The Beatles at 50: Merseyside music on the Fab Four’s best tracks

Let It Be almost gives us a time capsule to peer into the mindsets of members of The Beatles during the recording process.

There’s an argument that perhaps McCartney’s future in Wings was partially foreshadowed in many of the tracks of the album, with the more radio-friendly tracks perhaps implicative of a return to more concise pieces of rock ‘n’ roll.

Flitting between the rock-infused tracks intended for Get Back and the likes of Across The Universe, there’s a distinct charm to Let It Be that’s difficult to pinpoint.

What Let It Be may lack in cohesion it more than makes up for in quality, with some of The Beatles’ most honest, intimate songs found in the record.

Two Of Us is right up there with this writer’s favourite Beatles tracks, with the McCartney penned track seemingly cryptically discussing the relationship between Lennon and McCartney.

So, 50 years later, how has time treated Let It Be?

Originally, Let It Be was met with a relatively negative reception, the first and only time that had happened to a record from The Beatles.

But listening to the album from a contemporary perspective, it is easy to see that the charm of the album is the refreshing honesty and intimacy provided by the album, in particular on the 2003 re-release Let It Be… Naked.

When we listen to the tracks of Let It Be, it’s pretty clear that all is not well in the group. This is an album created by a group who are each seemingly being pulled in different directions, but are trying to stay together for the kids.

The new era of The Beatles that was to be ignited by the release of Let It Be ultimately never came to fruition, with the only live performance of material from the record coming as part of the now legendary concert on the rooftop of Apple Corps.

Indeed, some of the most intimate moments of Let It Be are those tracks recorded on the rooftop that made their way into the record.

Particularly when we watch videos of the performance, it seems that maybe for a period the group did see themselves performing once again – and the recordings of these tracks really are simply magical.

While most bands are faced with the task of the ‘difficult second album’, it seems that The Beatles were instead faced with a far more daunting prospect – bowing out of the limelight elegantly with a ‘difficult final album’.

Again, Abbey Road was recorded after Let It Be, but don’t forget that the band continued to work on Get Back/Let It Be after the release of Abbey Road, no doubt aware that the album they were continuing to work on was to be their last.

From the recordings of banter between takes to the false start at the beginning of Dig A Pony, it’s these elements of Let It Be that arguably give it more character than any other Beatles record.

There’s a refreshing honesty to these tracks, and a sense of being a fly on the wall inside the studio that so few albums manage to encapsulate.

Sure, most people would say that Let It Be isn’t the strongest album by the group, this writer included, but it’s undeniably got a real sense of character and history to it that makes it a truly unique listen.

In fact, listening to the album in full while researching the backstory really makes for an interesting experience – an experience I’d highly recommend to any Beatles fan.

Let It Be really is an outlier from the rest of the catalogue of the group, and seems to mark the beginning of a new age that was never to be.

And this is exactly that which makes the record just so charming, and even unique.

Sure, the flitting between guitar-driven tracks, orchestral ballads and older songs from the group can be a bit frustrating – but the lack of cohesion in the record is what sets it apart from the other records of the group.

Combine this with the interspersement of the rooftop tracks, and you’ve hit the essence of Let It Be’s longevity and lasting impressions – a refreshingly honest portrayal of the final years of the group, growing frustrated with one another and each seemingly wanting to do different things.

Tracks like Get Back and Dig A Pony have since entered into the repertoire of some of the best works of The Beatles, and with good reason.

Let It Be brims with mature songwriting ability. This is no longer the work of a teenage heart-throb boyband, or even a group of exploratory young adults playing with sound in the studio – this is the story of a troubled relationship between a group of friends who have simply outgrown each other.

And maybe that’s the best summation of the record. Many will agree that it’s not their strongest record musically – but the unique snapshot of a specific moment in time given in Let It Be is a truly fascinating listen.

Maybe the chaotic nature of the record makes a little more sense when we consider its backstory, and troubled origins.

After 50 years, Let It Be remains a troubled classic. Marred by the turbulent recording sessions, and Phil Spector‘s controversial production, the record is probably more divisive than any other by the group.

But it’s exactly this divisiveness that makes it just so interesting.

Let It Be perfectly encapsulates the end of The Beatles’ time together, and has stood the test of time as a truly classic record.

If you’ve not given it a listen in a few years – put it on from start to finish.

The candid lyrics and chaotic nature of the record really do perfectly portray the end of the line for The Beatles, while the rooftop recordings showcase what still remained the innate chemistry held by these four lads from Liverpool.