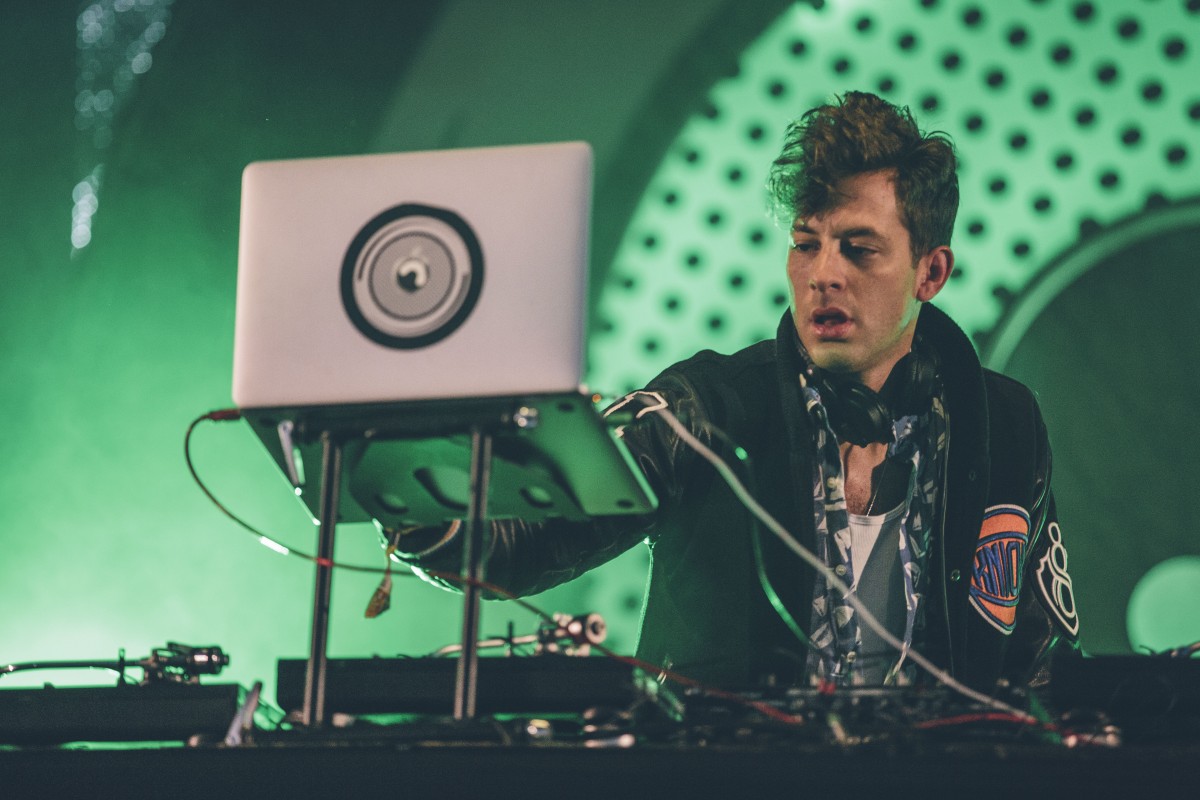 Mark Ronson, the genre-hopping DJ, has a crowded back catalogue, and Getintothis’ Nathan Scally has traversed his solo work to find the standouts.

Few people in the music industry have a contacts list as long and prolific as Mark Ronson.

Perhaps Simon Cowell’s is longer, but the difference is Ronson uses his for good.

If you were to have a scroll through, you’d find a who’s who from Q-Tip to Stevie Wonder, and Christina Aguilera to Lady Gaga, and Ronson has called upon it time and again to produce a star-studded run of hits.

He’s been a busy man since the late 90’s and you’d struggle to avoid hearing his influence more than once.

With a step dad in Foreigner’s Mick Jones, a stint as an intern at Rolling Stone magazine aged 12, and according to his mum, saved from drowning by Paul McCartney, music has been a pretty large part of Mark Ronson’s life from a very young age.

He put that experience and influence to work, handling the decks at the clubs and parties of New York City, having a hand in the production for countless records and putting together one of the most successful careers in recent memory.

Known across the world for producing some of the most well-known songs on the planet, Mark Ronson has spent over 20 years in the music industry reinventing himself with every ‘solo’ project.

I use the term solo loosely enough that I’m not squeezing the life out of the word, but not so tight that if I fall up a curb there’s a chance I let go to soften the blow. He’s a master collaborator who loves to share the credit, but they are very much his songs.

With 5 albums since 2003, each record has expressed a different side of his musical persona.

Here Comes The Fuzz was a self-described party record, intended to sound like a DJ had set up a base camp in the room with you. After all his years on the New York club circuit, this was him bottling it up so you didn’t have to blag you were on the list and knew the manager.

Changing lane, leaving the highway and then completely redirecting the trip, Ronson followed it up with Version.

The soul-infused cover record received criticism for its mash-up of track choice. It was a brave attempt that made up for it by re-imagining and bringing new life to each tune.

Opting to not only write his own songs again but to truly make them his, Ronson took singing lessons and contributed vocals to Record Collection.

Forming The Business International for a more adventurous effort, it felt like his most complete work yet.

If you somehow managed to skate through life without knowing who Mark Ronson was, that was about to change ’cause uptown funk was gon’ give it to you.

Bruno Mars was the voice of the song of the year, and Uptown Special was suddenly everywhere.

Seemingly impossible to match, the next effort Late Night Feelings instead delivered a concept album of sad bangers.

Of course, it came complete with an enviable list of guests including Alicia Keys and Miley Cyrus.

There’s something in his back catalogue for everyone, I dare you not to like at least one part of his discography.

I first came across Ronson in 2007, as a 12 year old whose pocket money was spent almost exclusively on music and sausage rolls.

At the time, filling my MP3 player and belly seemed like the only important things to do. So when I discovered the concept of buying singles instead of albums, suddenly I could divert more change toward Greggs.

The system was simple, roll into town on my school bus pass, buy whatever NME told me to, then treat myself to some baked goods.

Discovering the singles stand in HMV was revolutionary, suddenly I could hear more artists without committing to an album and have more change for pastry.

It was coming home with me.

There he was again, but this time Ronson had Phantom Planet’s Alex Greenwald with him, and Just became my new favourite tune.

Off to the shops again.

But this time it was a family trip, and dad responsibly suggested instead of buying each track separately, that I simply get the album at a conveniently discounted price.

At such a juvenile age, Version broadened my horizons. It was proof there was more to music than four lads in skinny jeans with curly hair and jangly guitars.

If you’ve ever visited his Wikipedia page, you’ll find a lengthy list of production and writing credits, so this ranking will focus solely on work from his studio albums.

Best albums of 2020 so far; Getintothis staff select the years top new records of the year

After securing the elusive Mos Def and hardcore rap duo M.O.P, they combined for an energetic bop-filled track you can’t sit still to. Each involuntary toe-tap, nod and twitch is all the evidence needed of Ronson’s ability to whip up a beat.

Narrowly (and I mean narrower than a tightrope) pipping The Bike Song to 10th place, On The Run clocks in at just over 2 and half minutes, it’s a blink and you’ll miss it banger that blends into any background. Out shopping, doing the dishes or even on the run yourself, it’s the soundtrack you need for an energy boost.

The obvious standout from HCTF, Ooh Wee brings together Hall of Famers in Ghostface Killah and Nate Dogg, as well as Trife and Saigon for a fizzy disco-rap anthem. Sampling Boney M’s Sunny for this particular track alone was the statement needed for the debut single.

Sampling is an artform and it isn’t something he doesn’t take lightly. As such, the strings marinate in your ears, bringing it all together for a flavour that still stands up today.

Most notable in the video is a questionable-at-best choice of hair design from the DJ.

Splitting opinion upon release, Version is an eclectic selection of retro soul-inspired covers of tracks from Britney Spears to The Jam. Hidden among these genre-spanning covers are three brass-laden instrumental gems, each one in their own right stealing your attention.

Inversion provides a break for composure midway. Diversion acts ultimately as segue into Kasabian’s rendition of their own L.S.F, and the two combine for an epic version arguably better than the original.

On the back end of the album Outversion is something that wouldn’t go amiss at the end of a film, as the main characters drive off into the sunset.

Releasing Bang Bang Bang immediately was as rash a departure from Version as you could expect.

Replacing horns with synths, it’s a simple melody that’s effortlessness is at the root of its appeal.

With a return to the block party feel, Feel Right is a largely stripped back effort compared to the rest of the LP, letting Mystikal’s vocals bring the speakers to life.

An undeserved failure in the charts, it’s a syringe of adrenaline just waiting to be injected into any situation.

Seriously, drop it anywhere you deem appropriate and make note of the bopping.

This is a track that I’ll never be able to do justice with mere words.

The Ainsdale beach raves: “A chapter of northern dance music history had been written”

Slowing down Kaiser Chiefs’ debut single comes Ronson’s superior iteration. Lily Allen feels at home behind the microphone oozing mojo effortlessly. This is everything Version was intended to be.

Oh My God sits firmly near the top of Allen’s career, partly due to Ronson’s ability to get the best out of an artist (listen to Robbie Williams‘ cover of The Only One I Know for proof) but on the most part, Lily sounds absolutely home on this track.

Kevin Parker made himself at home in the Uptown Special studio, featuring three times, and Daffodils is the most Tame Impala-ey track amongst them all.

Opening with the instantly recognisable guitars Parker is known for, it’s the sound of two worlds colliding.

I imagine this is the track where Ronson most ceded control to his collaborator, and the album is better for it. As Kenny Rogers would say, he knows when to hold and when to fold.

Marred with copyright claims, Bruno Mars is the face of one of the decade’s most infectious tunes.

You heard it in bars, supermarkets, talent shows and an innumerable amount of covers.

The funky sensation conquered the world, and as overplayed it might be to many ears, denying its credibility as one of the bright lights in Ronson’s career just wouldn’t be right.

A melancholic melody combined with lyrics that tell the tale of heartbreak, Lykke Li harmonising with herself is the assurance you need that no matter how bad things are, they’re just late night feelings.

The inspiring thoughts might only be escapable by scarpering to bed, but once the pair have their hooks in your eardrum they’re not letting go.

It’s the obvious choice and it’d be sacrilege to suggest any other track sit at the top.

Ronson took Winehouse’s version of The Zutons’ classic, creating a cover of a cover that became one of the most iconic tracks of the 21st century. Shockingly, it never reached top spot in the singles chart, but anyone doubting the influence and popularity simply need visit any karaoke night, there’s always one voice attempting to channel Amy.

It’ll take some going to top this, but Ronson’s career tell us he seemingly isn’t afraid of anything.