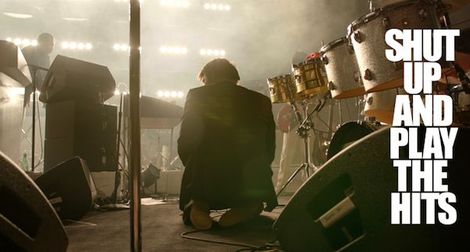 A reflection on LCD Soundsystem’s documentary Shut Up & Play The Hits recounting their final days.

Wow. LCD Soundsystem‘s Shut Up & Play The Hits is magical.
Not since Prince‘s Sign O’ The Times, a work which Rolling Stone claimed as the best concert film ever – ‘making Michael Jackson look nailed to the floor’ – has a production captured the very essence of a live performance so well.
However, where Prince‘s 1987 spectacle was largely staged, re-shot and carefully crafted in post-production, LCD’s is almost entirely shot within the moment, expertly managing to immerse the viewer into a live gig’s visceral intensity.
That’s not to say, directors Dylan Southern and Will Lovelace haven’t poured over every detail after LCD’s final performance staged at Madison Square Garden on April 2, 2011. They have.
However, as the pair revealed in a fun post-screening Q&A last night broadcast to cinemas around the country, this was the ‘cheapest, most low budget’ film ever shot within the giant boxing arena.
The film follows LCD band leader James Murphy‘s final 48 hours – before, during and after – the collective’s final gig and what unravels is two fold – a portrait of a man contemplating BIG issues and a band specialising in BIG fun.
The big fun dictates the bulk of the film – and this is where the music takes over as Murphy, Nancy Whang, Tyler Pope, Pat Mahoney, Gavin Russom, Al Doyle and David Scott Stone showcase their incredible musicianship.
Mahoney and Doyle in particular stand out, the former a relentless, understated metronome keeping the party going, the latter a camera man’s dream; all punk hipster throwing ridiculous guitar signatures and some phenomenal facial expressions.
Whang for her part brings adds some cute touches both behind the electric piano and her tender platonic relationship with Murphy; this is a portrait of a band that are profoundly connected both as musicians and people.
Of the tunes – well, they’re virtually all wheeled out with Murphy on hand to make sure they sound positively huge in the post-production editing suite. Yeah (pretentious version) begins midway through piercing your inner drums to an inch of their life as we’re bathed in green strobes, Movement captures the post-punk warchild as cameras follow the pandemonium within the crowd as the beats thud and thud, Us v Them is as fast, funky and as cowbell-assisted as ever while All My Friends is tossed out early doors sounding truly transcendental as kids weep and scream in equal measure.
Of course, this is the band’s last EVER show, so it wouldn’t be complete with some extra special touches – but characteristic of Murphy, he’s keen to let these appear as natural and lacking in contrivance as possible, so you get Reggie Watts helping out on a stunning 45:33 segment, there’s a Flaming Lips-style spacemen chorus on Sound Of Silver and New York I Love You is given the Sinatra treatment with extra gravitas as Panda-suited whoppers well up again.
Best of all is cameo of Arcade Fire who do what Arcade Fire do best – screaming an unholy racket while remaining relatively tuneful during probably the best version of (a song which is one of the band’s weakest) North American Scum ever.
Yet, for all the majesty of the music, it’s the other little touches which stay with you. Murphy’s relationship with his band, Murphy’s relationship with his scene-stealing puppy, Murphy’s candid relationship with his manager and most poignantly Murphy’s relationship with himself.
What begins as a farcically pretentious interview with journalist Chuck Klosterman set in a coffeehouse the day before the last show, starts to make sense around the time Someone Great kicks in.
Murphy, reflects on abandoning fame, abandoning a band which could very well bring greater music to a wider audience and essentially abandoning a good thing which makes many people, including those closest to him, very happy.
He reflects on his own bigger issues of ‘wanting kids,’ wondering what’s going on his lower intestine and liver while on tour, contemplating if he’s wimping out and failing to live up to his idols David Bowie and Nick Cave – even remarking that maybe Kanye West‘s tweets are right, that no one strives to be a rock star anymore.
But ultimately, even when he breaks down inside a garage which is storing all his band’s instruments ready to be sold, you get the sense, he knows he made the right decision.
For when he’s asked what he ultimately wanted to do, he says: ‘to leave a mark. To leave a stain.‘
LCD Soundsystem unequivocally did that.

Shut Up and Play the Hits By the Numbers
Number of onscreen hugs: 30
Number of extra-special Arcade Fire hugs: 3
Number of appearances by Murphy’s scene-stealing, adorable French bulldog: 6
Number of live songs included: 12 (“Dance Yrself Clean,” “Movement,” “All My Friends,” “Us V. Them,” “45:33” excerpt, “Sound of Silver,” “Losing My Edge,” “North American Scum,” “Yeah,” “Someone Great,” “Jump Into the Fire,” and “New York I Love You”)
Number of cameos by comedians: 2 (Aziz Ansari, Donald Glover, and also a guy who looked a lot like Andy Samberg)
Number of weeping hipsters captured on film for all eternity: at least a dozen, including two in panda suits
Messages for James Murphy when he wakes up after the show: 15
Number of neckties interviewer Chuck Klosterman was “not anticipating” Murphy to be wearing at the interview: 1
Number of minutes during the scene where James Murphy is shaving his beard before he actually reaches his neck: 3
Number of very Chuck Klosterman-like questions asked by Chuck Klosterman: Many.
“When you start a band, do you imagine how it will end?”; “When does art begin?”; “When you read Gravity’s Rainbow to be cool, who are you trying to be cool for?”; “You strike me as someone who is acutely aware of your age”; “Do you like talking about yourself?”; “What has been the biggest failure of LCD Soundsystem?”
Number of times James Murphy says no one will ever be able to become David Bowie: 2
Number of camera crews ballsy enough to follow Nancy Whang into the ladies room during the first set break: 1
Number of awesome Afros during the second part of “45:33”: 1, belonging to Reggie Watts, who was also sporting an awesome “FU” T-shirt
Number of people who shouted out the name of the movie before playing “North American Scum”: 1, Arcade Fire’s Win Butler
Arcade Fire’s most awkward dancer: Win Butler
References to Kanye West’s Twitter account: 1
Number of times James Murphy just loses it and bawls onscreen when it hits him it’s all over: 1, when he’s looking at all the gear in storage
Number of times James Murphy tells his taxi driver, “Williamsburg, second exit off the bridge” en route to the band’s dinner: 3
Number of bald heads focused on during “Losing My Edge”: Like, 40
Number of “sad statues” the band’s manager presents to Murphy the day after the show: 1 small replica of MSG.
Getintothis‘ LCD Soundsystem Top 10
LCD Soundsystem tops Getintothis‘ Albums of The Decade.
Getintothis reviews LCD Soundsystem at Manchester Academy
Getintothis previews This Is Happening Track by Track
LCD Soundsystem features in Getintothis‘ Top 10 Albums of 2010
LCD Soundsystem tops Getintothis‘ Albums of 2007