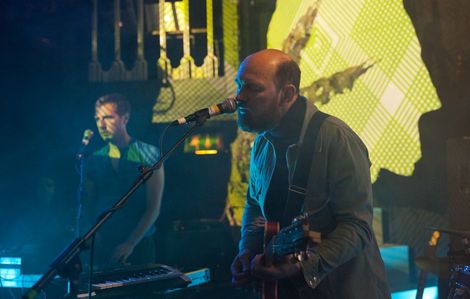 Wave Machines make their return to the stage alongside some of Liverpool’s rising stars, Getintothis’ Stephanie Heneghan dons her antlers amid the owls and foliage of the Kazimier’s Rural Disco.

As far as contradictory events go, spending Thursday night watching beautiful pop princess Chezza Cole in an arena full of glamazons (high heels and higher hair was the uniform) differed greatly from my Friday plans when Getintothis headed off to the Kazimier where ‘a forest of unearthly delights crawling with feral creatures’ awaited us.
Oh yeah and some pretty decent bands too.
Arriving midway through the sounds of Night Class, a three piece ensemble with a laid back deep electro sound, almost 80’s tinged in place. Apparently this was their first live outing, if this is the case they did themselves proud – no nerves were apparent and their lead singer had both good hair and decent kicks.
For the second act though – the oddly named Coffee and Cakes for Funerals – their appearance was inconsistent with their moniker, put bluntly, they looked like four scallies, complete with angled caps and black hoodies.
We were prepared to give them two songs and then head off to the bar for refreshments (Diet Coke, FYI) but then lead singer Joe Hazzlett opened his mouth and we was forced to eat my words.
The fella has got soul – proper raw talent. That’s not to take away from the rest of the band either; they displayed a tight set, with a cool pop RnB sound that had flashes of Neptune‘s era Justin Timberlake, with heavy beats and sick guitars.
While their interaction with the crowd was nil, we can promise you we’ll be seeing them again as their music spoke volumes – awesome stuff.
The same can’t be said for Dogtanion though, from their alphabet American Apparel tees (spelling out D-O-G) to their rehearsed stage patter, it appeared overly affected.
Their tracks veered all over the bleeding shop too; every one sounded like it was performed by someone new but none of them were memorable five minutes later.
Though championed on these very pages over the years, this was the first time yours truly had watched Wave Machines live – and the mega plaudiits were utterly deserved. A team effort, with all members having a crack at vocals and swapping lead roles on stage – they’re good fun both to watch and listen too.
Falsetto vocals abound, the odd clang of cowbell (more cowbell!), it’s a bit jaunty, a bit disco with …Punk Spirit proving to be the crowd pleaser with everyone singing along to the chorus. This homecoming gig will kick off a string of European shows for them so if you get the opportunity, see them.
And closing out is our favourite Liverpool band of the year – The Tea Street Band. We’ve seen them five times already in 2012 (does this make me a stalker or a groupie?) and with the release of their single Disco Lights they’re continuing their ascent – some of them already displaying diva tendencies judging by the sunglasses being sported.
As per, it’s an energetic set, Disco Lights gets a cheer, Summer Dreaming is as enchanting as ever with everyone dancing – from the fella waving his crutches about, to the girl channelling the 051 circa 1997 with her dance moves.
The only feedback – not criticism! – is that I’ve seen it all before now, five times in fact, and it’s enjoyable as ever but starting to feel slightly like they’re playing it safe.
Oh and that ‘a forest of unearthly delights crawling with feral creatures’?
Well there were wooden trees, garlands of leaves – actual leaves! – some pretty terrifying OWL (!), head dancers stalking about the place and a cool video montage thing of speeded up nature stuff set to an stuttery electro James Holden, Nathan Fake style soundtrack.
Like we said, slightly different to watching a sexy Geordie popstar shimmy round a stage 25 hours earlier but then variety is the spice of life.
Getintothis on Wave Machines’ new single Ill Fit.
Getintothis on Wave Machines live at Sound City 2010.
Getintothis on Wave Machines live at Dubai Sound City 2009.
Getintothis reviews Wave Machines debut Wave If You’re Really There.
Getintothis reviews Wave Machines at Static Gallery 2009.