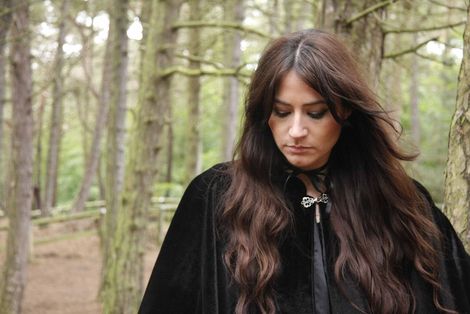 Eva Petersen, ‘the greatest singer to come out of Liverpool in the 21st century’ has returned to the spotlight with a new album Emerald Green Eyes showcasing her special talent. Getintothis’ Alan O’Hare talks Will Sergeant collaborations, nihilistic music and her singular vision.

The best music usually arrives from two very different circumstances.
The first is when an artist turns inwards and creates work so personal and honest, that you can’t help but stand back and admire it.
The second happens through collaboration – and it’s very often the best way. Think about it: two heads are better than one, right? Especially when the heads don’t have any hits or history to put pressure on a creative relationship.
Eva Petersen met Will Sergeant through Richard Hawley.
You’ll recognise Eva’s name – she used to sing with The Little Flames (Miles Kane‘s first band) earlier this century. They made a record with Deltasonic in 2005 and toured with Arctic Monkeys and The Coral.
When that fizzled out, Eva decided to follow her own muse and got in touch with Hawley through MySpace (remember that?!). He in turn put the Liverpool-born singer in touch with her current managers and the connection with Sergeant was made (they also manage Echo & The Bunnymen).
“Eva is the greatest singer to come out of Liverpool in the 21st century,” declares Sergeant.
He’s put his time and creativity where his mouth is too and produced her debut solo album, Emerald Green Eyes, out now on Porcupine.
“It’s been amazing working with Will,” says Eva.
“I’ll describe how I want something to sound and he’ll know exactly what I mean straight away… it’s rare that happens between two artists.”

Petersen may not have put a record out for a while but this album has only been about 18 months in the making.
“I sent Will some songs and they came back with this unmistakable ‘Will Sergeant‘ wall of sound,” she reveals.
“He’s into the same stuff as me: weird soundtracks, 70s horror films, Neu! and Can. We like things that are an acquired taste and the same things seem to get us in the mood to create music.”
The first single, Jewelled Moon, is a cracker – imagine a Scouse chanteuse fronting Roxy Music back in the day – but it’s the penultimate song on the album, Sunday Love Affair, that’s the real gem and the key to the record.
An understated beauty, the gorgeous melody and top end tickle come on like the best late night B movie soundtrack you’ve never heard.
Eva’s vocal sits somewhere between the nihilistic breathing out of Nico and the more modern torch song tongue of, say, Ren Harvieu, but make no mistake: this girl is all her own creation.
“I really took my time to get this right,” she says. “Why rush a labour of love? I had the luxury of doing what I wanted and no pressure from a label… that’s never great for creativity and I can’t tell you how much pleasure I got from not having to compromise.
“I think you’re braver when it’s just you and your ideas too – you can jump right in to it and take risks.”
She’s not wrong. What we’ve heard so far is the sound of an artist finding herself, with a little help from an experienced friend, and liking what she’s discovering.
“I love things that are a little different. People like Janelle Monae or The Tea Street Band… it’s not what you expect.”

The same is true with Emerald Green Eyes. We know what you’re thinking: another 60s obsessed retro sensation? Not this time, kid – this is music loaded with original thought. And it’s not just the Bunnyman‘s reverb-laden, doom-scapes that dominate. The voice rules here.
“I’m looking to get out on tour in the new year and we’ve got a couple of bits and pieces booked,” she reveals.
“It’s good that people like the album (Q and MOJO have given it the thumbs up recently) and we have had some nice reviews. But I’m also ready to jump straight into the next one.
“This album feels like a full piece of work, my own work, and that’s a great feeling.”
Eva Petersen may not have arrived fully formed. But she’s certainly on her way now. Get her in your sights.