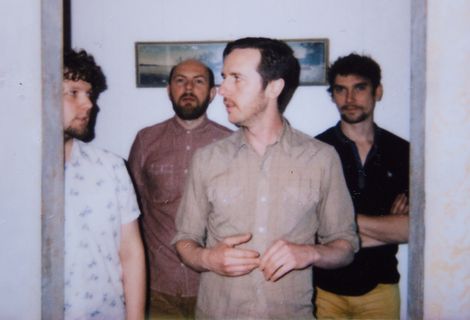 Wave Machines return with their second album Pollen in January, and after four years in the making, they tell Getintothis’ Mike Doherty it was a feverish process.

For what felt like a long time, we heard nothing from Wave Machines. Then in March, Counting Birds came out accompanied with a visually unsettling video and we knew that Wave Machines were back.
Then in October they dropped Ill Fit, and something was clear; Wave Machines have upped their game and their impeding album Pollen, co-produced by Lexxx, will be pretty incredible.
We called up lead singer and guitarist Tim Bruzon to discuss this new album and the bands plans for 2013.
Getintothis: You’ve put out Counting Birds and Ill Fit from the new record, why did you choose these songs first?
Tim Bruzon: “Because it was the first thing we’d finished mixed with Lexxx. We thought we’d just throw it out there; we made a video for it just to remind people that we were still around after extended absence.
“Counting Birds was the first single, although it didn’t really have a proper release. It was one of the first songs that we finished that we were really happy with.”

Getintothis: It has taken almost four years for this new album to come out, what took so long?
Tim Bruzon: “Well, we weren’t making an album for four years. Our first album (Wave If You’re Really There) came out in 2009, so we were doing a lot of touring and didn’t stop playing shows until over half-way through 2010 promoting that album.
“It’s been a couple of years of writing. But what happened is that we wrote a lot of material that just wasn’t good enough, that’s the long and the short of it.
“We’ve written above and beyond this album, there’s probably over one and a half album’s worth of stuff that didn’t quite make the grade. We wanted to make a step forward with this album, unfortunately that took a bit longer than we’d hoped.”
Getintothis: So you had to do a bit of fine-tuning with the songs?
Tim Bruzon: “Yeah, there was a lot of fine-tuning. But it was more a case of sacking songs off that weren’t happening.
“So we worked on a lot of songs that we thought were definite contenders for the album, and it just didn’t really stand up tot the scrutiny of the band and the producer, so you’ve got to be quite brutal at this point and put out work that you think you can stand by.”

Getintothis: Did you write the 10 specifically or did you write more and then whittle them down for the 10 on the album?
Tim Bruzon: “No, there was quite a few songs that came on and off the table, Ill Fit had been quite a strong contender to be on the album for a while, but as the other songs came in around it, it wasn’t really standing up.
“It had a different chorus at this point I should point out. For a while it wasn’t going to make it onto the album, so we really worked on giving it an energy and a colour that would benefit the record.
“That’s part of the process; a song’s not necessarily down and out in it’s first instance, a lot of stuff gets put through the mill, if one song doesn’t really work but they’ve got good lyrics, then they will be used recycled. There’s a lot of what you might call fine-tuning, but it’s more like mixing a big pot.”

Getintothis: When Ill Fit was complete, was it a case of fitting other songs around that sound, or were you trying to make them their own?
Tim Bruzon: “For Ill Fit, the sound of the song and the music has been pretty similar since its inception, but I think that one and Counting Birds was another one that we thought was a good centre point for the album, so they were definitely markers when we were fitting other songs around it. We wanted to fit with that sensibility.”
Getintothis: How do you see this album compared to your first one?
Tim Bruzon: “I’m hoping it’s more coherent, and less of a mish-mash of styles.
“Maybe I’m very sensitive to the songs in the first one, but to me it was quite flawed, there were a lot songs that I think were really good, I was happy with it as a whole piece of work, but it sounded like we were trying to find a sound and we hadn’t quite found it. Where this time we actually wanted to find a sound and be happy to make some songs in that template.”
Getintothis: Do you have any particular favourites on the new album?
Tim Bruzon: “I suppose I like them all for different reasons, but there’s a song called Sitting in a Chair, Blinking, which is the very last song on the album which I particularly like because it was a nice product of me and Lexxx working together.
“The band had been in the studio recording the music for the song, but when I took it to Lexxx, he thought it wasn’t really standing up alongside the others so he said we should scrap all the music and spent a couple of days of programming and coming up with the new backdrop to the melody and lyrics.
“That was a really lovely, organic way to work and I like that because I would never have come up with that on my own.”
Getintothis: How was working with Lexxx as co-producer?
Tim Bruzon: “He was really helpful. I learned a lot from him, as I did when he mixed our first album, but I was actually able to spend more time working closely with him this time around; we got him involved in a much earlier stage of the process.
“He’s quite harsh at times, which is important. It’s always really important to have someone like that who’s not in the band to give you another strong opinion; one that you may not always agree with.
“Occasionally he’d make a point and I would disagree with what he’d done. It was nice to have a challenge to prove someone wrong. If he was saying ‘this isn’t working’, I would think ‘OK, I’m going to make it work and show you I was right’.
“We like to show that we’re more right than somebody else, it’s a bit of healthy competition and it helps us write better in the future.”