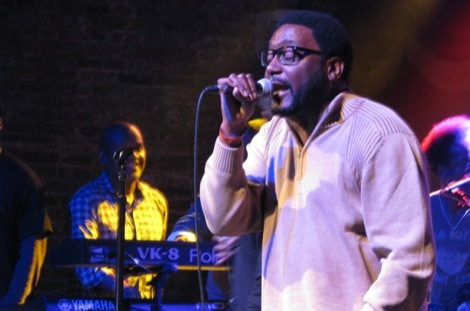 It’s not often we get rap royalty gracing our presence up here in Liverpool.
In the past, more often than not to see the genre’s elite artists any northern hip-hop heads must take a pilgrimage to the country’s capital, casting envious glances at the London crowd and their good fortune of having the cream of the crop performing on their doorstep every time they cross the Atlantic.
If the past year is anything to go by, however, the tide is turning. With two of most exciting up-and-coming artists, Shabazz Palaces and Joey Bada$$ and the Pro Era crew, wowing crowds with their inaugural Liverpool shows, it was the turn of one of the game’s forefathers to do the same.
For the first time in his illustrious 26-year career Big Daddy Kane treated the raucous crowd at the East Village Arts Club to one of the finest performances they will ever see.
Support came from some of the major figures in the local hip-hop scene, with DJ No Fakin performing one of his usually exciting sets full of funky tunes to get the crowd warmed up, before taking to decks duty for Tony Broke and Innuendo, who previewed some of their highly-anticipated new material and, along with the rest of their crew, finished off with a classic 16 bar rap battle.
The stage was set for the man widely regarded as one of, if not the greatest MC of all-time – and he did not disappoint.
It may be fifteen years since BDK last released a solo record – and many of the crowd weren’t even born when he released his debut album in 1987 – but (resisting the overwhelming urge to use one of the myriad of awful puns thought up while writing this) he certainly hasn’t missed a step.
Paying homage to some of rap’s fallen greats – including Tupac and Biggie, who BDK famously brought on stage at one of his New York shows in 1993 for one of the most legendary freestyle battles ever – BDK got the crowd participation going from the off and he regularly interacted with the first few rows of the crowd. Both artist and audience fed off each other’s energy all night which made it a truly wonderful spectacle.
Racing through an hour long set performing classic after classic from his extensive discography including Smooth Operator, Set It Off, Warm It Up, Kane, Wrath Of Kane and I Get The Job Done, he saved his best for last, ending with his signature track Ain’t No Half Steppin’, which was an extra special moment for this reviewer who BDK passed the mic to rap one of the lines to (which probably shouldn’t be repeated, but is on YouTube for the none of you that are interested).
This was more than just a gig; it was a celebration. Liverpool’s bourgeoning urban music community has good collective strides over the past few years, with fans, artists and promoters alike all doing their part to make the city an appealing place for artists to come and perform, and to get a headline act like Big Daddy Kane here after all these years is the culmination of that.
It was a monumental night, and one that announced to the world that Liverpool is no longer on the periphery of both the national and international hip-hop scene.