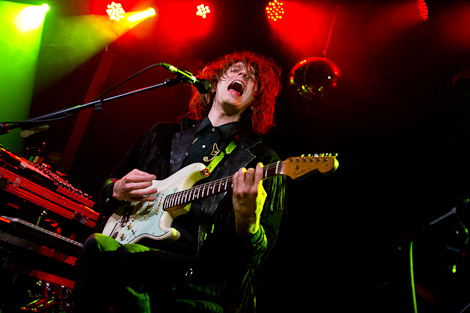 The Mystery Jets and a strong Liverpool supporting cast serve up a treat on the official launch of East Village Arts Club, Getintothis’ Alex Woo champions the return of an old haunt given a new lease of life.

There were cheers all around when it was announced last year that The Masque was finally getting the facelift it had so desperately been in need of.
In the safe hands of the MAMA Group, who have done an excellent job of renovating some of the best venues in the country including Manchester Ritz and The Jazz Cafe in London, the centre has been transformed in to a spectacular multi-purpose beacon of hope for the city’s music scene in these times of austerity.
Now under the moniker the East Village Arts Club, it was rather apt, then, that the official launch night was filled with an eclectic mix of emerging Merseyside acts, topped off with a band that have played in Liverpool so frequently over the years that they’re practically adopted Scousers.
The night started with two emerging Liverpool bands, who both showed plenty of promise even if they are not quite the finished article yet: Sankofa‘s downright filthy riffs and booming drum beats warmed up the crowd, before teenage upstarts The Razz, with Abbey Clancy (whose brother John is lead singer and guitarist) and Peter Crouch in attendance, followed with a lively set of their own.
Chief support act were The Dirty Rivers, fresh off recording their first music video for debut single The Kid this week.
The band smashed their way through a half hour set with front man Mike Ellis being his usually ostentatious self, making the band impossible to ignore. The Merseyside rockers debuted a couple of new tunes, Give Up Your Love and Hands Like Fire, fuelled by typically sonorous rifts, as well as adding a few of their more well known songs back in to their set list as they breezed through their final Liverpool gig before venturing off on their first ever headline national tour. 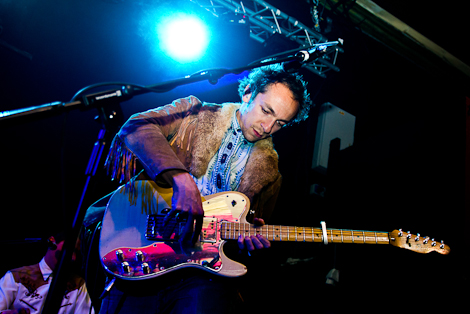 Mystery Jets live at East Village Arts Club
Over the past year they have refined their heavy sound, and are much more than just the rambunctious rockers they were labelled as when they first burst on to the Liverpool music scene. It’s easy to see why they continue to make waves all over the country; it won’t be too long before they’re back here as the main act. Their time will come, but this night is all about The Mystery Jets.
Their development from fresh-faced indie-poppers to genre-hopping, experimental rock band since their move to Rough Trade records in 2010 has not been an easy one, especially with the ill-timed departure of bassist, Kai Fish, last year, and the health problems of lead singer, Blaine Harrison, but they always sound sharp and on point. Having been one of the headline acts at last year’s Sound City, this is the fourth time in a year that the band have performed in Liverpool and they have built up a loyal following.
Their set, understandably, was heavy with songs from their Texas-inspired latest album Radlands, with them playing a selection of tracks such as Greatest Hits, Lost In Austin, The Hale Bop, Someone Purer and Sister Everett, which captivated the fanatics in the audience but sometimes failing to quite grab those who are not so familiar with the band’s work, which often made for a more pensive atmosphere; quite the contrast from the heavier material that was on show earlier in the night.
But The Mystery Jets know how to put on a show, and they do not neglect the fan favourites, much to the delight of the crowd who raise the roof for Half In Love With Elizabeth, Flakes and Young Love from their 2008 album Twenty One. There was just one glaring omission from the set, which the crowd had waited patiently for, and they eventually got their wish in the encore. Two Doors Down, their biggest single to date, unsurprisingly got the biggest cheer of the night and looking down from the top of the main auditorium on to an ecstatic crowd singing along to every word was a beautiful picture. 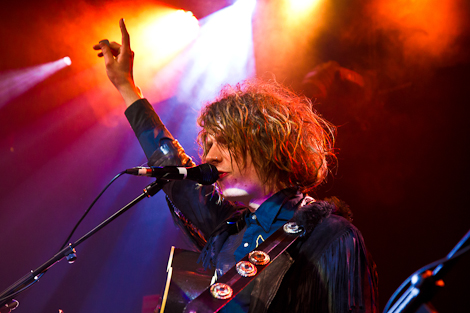 Hands up those who like playing in Liverpool
Closing with a surprise choice of Alice Springs, the opening track from their 2010 album Serotonin, The Mystery Jets officially open the EVAC with a bang, and if this is what’s to come in the future then it won’t be long before the venue is again the epicentre of the Liverpool music scene like it was in its Barfly days. The Masque may be dead, but long live The Arts Club.
Further reading on Getintothis
East Village Arts Club: Liverpool music is exciting – we want to be a part of it
The Masque Theatre announces immediate closure – Getintothis reflects on its finest moments.
Mystery Jets, Folks, Ben Caplan: The Arts Academy, Bombed Out Church
Mystery Jets: Mersey Ferry, River Mersey, Liverpool
Liverpool Sound City: Mystery Jets, Glasvegas, Laura Marling, Ragz, 28 Costumes, Sons & Daughters, Lightspeed Champion, Eugene McGuinness, Wild Beasts: Various venues
Pictures by Getintothis’ Michelle Roberts.