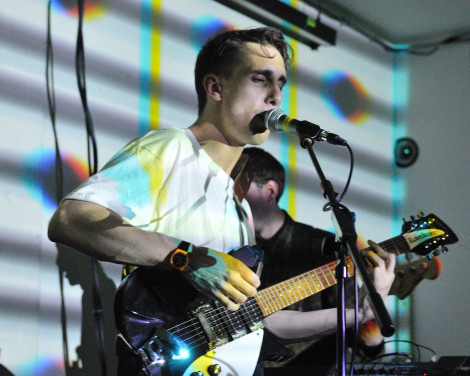 As Outfit prepare new album Performance they gear up with a free show at Camp and Furnace, Getintothis’ Michael Everett caught them all dressed up and ready to go.

It would be slightly daft to call this gig a homecoming but it certainly feels like one.
Outfit played this year’s Sound City, popped down to London, supported Everything Everything for several dates and then popped into BBC6 Music to have a live session airing new tracks from their debut album with Marc Riley.
Add this to their tour with Electronic Voice Phenomena (their experimentalism evident at St George’s Hall showed a different hand to the deck of aces they hold at the moment, albeit a promising way to go for the future) and the band has evidently been busy indeed.
All of this builds up a positive and expectant vibe in the Blade Factory. People are up for it. There is expectancy, the cliché that there is something in the air rings true. This isn’t lost on Outfit. 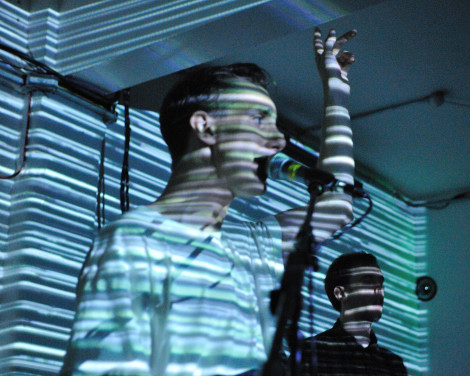 Andrew Hunt shows us the only direction Outfit are heading in right now
The Sound City gig, although good, never quite had the feel of tonight. Starting off with the song Performance, Outfit are clearly on inspiring form.
Andrew Hunt’s vocals are lush and are a sign of a confidence possibly gained through the recent months of activity. All those people who love Two Islands are suddenly realising that, dare we say it, Outfit have written better songs.
Yes Two Islands has a great atmosphere and mood, and lets not forget it’s a great recording. It’s a pop song searching for Colonel Kurtz.
However Nothing Big is a markedly better song. Between Thomas Gorton’s and Andrew Hunt’s duel vocals they conjure up a sadness that is balanced by pure pop at its best.
It’s not just here that it is evident either. The Great Outdoors is also drop dead dreamy; languid yet bursting with Caribou beat-downs. Outfit, thankfully, do not hit you on the head with a hammer bugging you to like them.
Riley’s comparisons to Fiction, Dutch Uncles and Django Django are fair but not entirely on the mark. Outfit’s approach is cannier than this.
Nick Hunt’s guitar playing tonight is always subtle enough never to outdo any other cog in the band but his playing gives the whole thing the necessary textures to glue it together.
Marry this to David Berger’s ear for a beat and precision drumming plus more than supportive basslines from Chris Hutchinson and it all results in a rum concoction indeed.
Melancholy, yearning, beauty, charm and a certain sexiness are the elements on show for the listener.
A song like Spraypaint captures all of this. It is Outfit at their best.
It may not be as uplifting and crowd bolstering as the accomplished I Want What’s Best or upbeat songs from their recent past, but when you stick the album on it will probably be one that gets repeated over and over again. 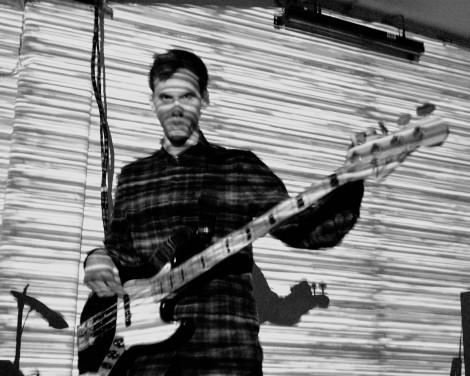 Outfit’s Christopher Hutchinson in action at Blade Factory
Tonight’s showing of the song was bang on exquisite. After tonight, Outfit and their adoring audience should have very little worry that the album is going to be anything but a great debut.
Alas, debuts bring so much absurd and unfair pressure that bands fifteen years ago never went through. When David Berger recently said that Outfit “were making an album to learn how to make an album” this chimed winningly. Any music fan worth their salt would like to see a second, third and beyond that.
Bringing it back to the present, tonight’s gig was a triumph and a joy and they enjoyed themselves with a crowd that was fully into it. Roll on August 12 – and the release of Performance. 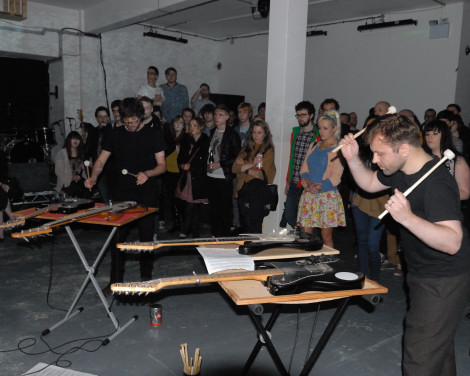 Ex-Easter Island Head, granite-faced with concentration, beat out an unusual kind of rhythm
Earlier, Ex-Easter Island Head set themselves in stone with a corking set.
They deal in experimental percussion driven instrumentals which needed no pomp or interruption for explanation. If there was ever potential for a show stealer, these guys produced exactly that.
Bird continued to raise the bar by doing what they do best; keeping things haunting and introspective.
Given the gothic ethereal sounds the trio conjure in the studio, it’s difficult to imagine it being replicated live, but a densely populated and lively Blade Factory were genuinely engrossed. 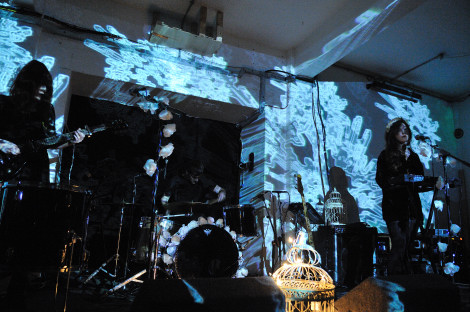 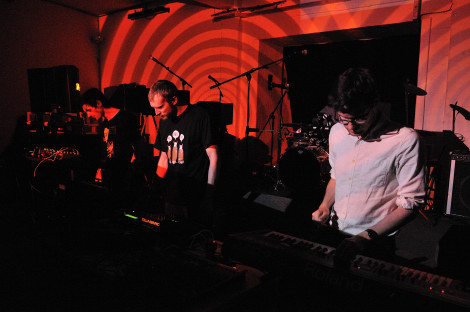