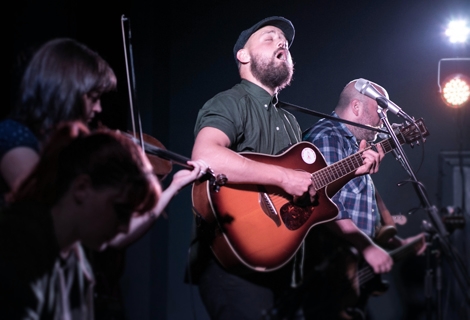 Silent Sleep, together with their collective musical contemporaries, offer up a night cosier than warm buttered scones around a burning log fire, Getintothis’ James Elson snuggles in.

The evening began rather unusually. What with Leaf‘s licensing regulations meaning all under-18s had to be out the building before 10pm, one 13-year-old fan is appeased by being given an intimate acoustic set by Silent Sleep front man Christopher McIntosh prior to the ‘real’ gig kicking off.
A touching gesture, warming the cockles of each audience member present. The sheer loveliness was almost too much.
Silent Sleep, Voo and Puzzle are an incestuous bunch sharing many of the same members; some swapping instruments in each act. One might view the bill as an artistic collective rather than a number of different groups. 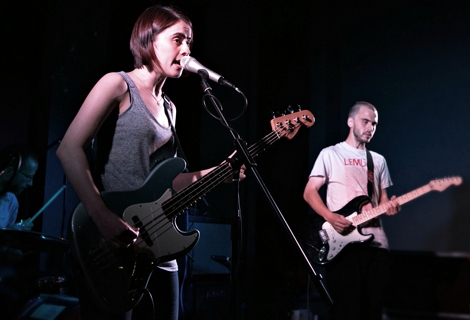 Puzzle warming up the crowd at Leaf Tea Shop
Power-pop-punk trio Puzzle plugged in and kicked off. Vocalist Lucy Johnson delivers her all into a solid set of tunes; all steady drum beats and controlled guitar being the order of the day – only managing to stoke up the good vibes floating about the room. With a reassuringly tight performance heads were nodding and drinks were bobbing.
Voo provided the driving indie-rock, propelling the evening’s proceedings into a further dimension. With the aforementioned McIntosh now on electric guitar, his fellow minstrels summoned forth swirling sonic textures of a decidedly Liverpudlian persuasion imbued with a certain US college rock. Ethereal sounds mixed with the echoing ambience of Leaf meant the audience were practically levitating at this point. 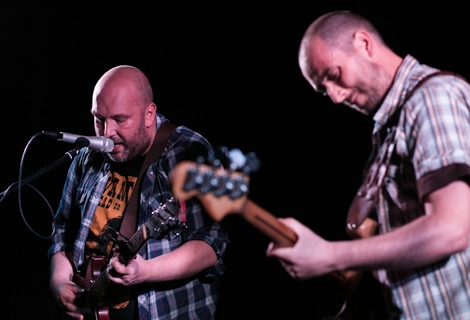 Voo – giving everyone a big lift
All chums concerned from the previous acts reconvened Power Ranger-style to zap McIntosh’s Silent Sleep tunes into life. Hearing his compositions in their bare bones at the beginning of the night then in their full-bodied form later gave the evening a complete feel. The lyrics were heartfelt and the music subtly hard-hitting. Perhaps more variation in the mood would have brightened up the proceedings slightly, but few would really have had complaints.
Pulling what’s known in ‘the industry’ as a Def Leppard: their injured footballer/drummer played the whole gig with one hand, not that it mattered as he didn’t miss a beat. As glockenspiel and violin entwined and chimed through the mix, the collective’s rhythm section locked in and knuckled down, giving McIntosh a platform from which to launch his folky rocket. And we, the listeners, were more than content to plunge deep into his tales of love and loss. 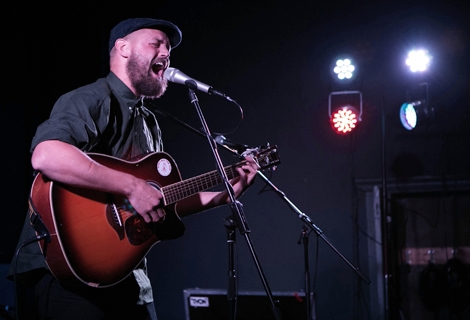