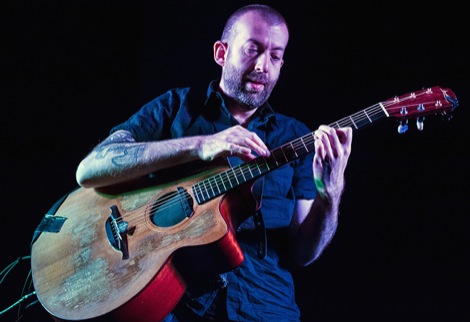 Jon Gomm is not a guitarist but an infectious fever.
He doesn’t amass fans so much as gather evangelists, and it is their voices which can often be heard as he introduces each song.
“Here’s the one I told you about.”
“Watch what he does now.”
“This is the bit…this is the bit.”
The excitable chatter tends to give way to a noiseless disbelief followed by raucous applause. Nowhere is this more evident than during Passionflower – his fully blossomed YouTube sensation which has just soared past the five million views mark.
In the online video Gomm performs his masterpiece spotlighted in a dark room and he might as well be there again, silencing and captivating the upstairs of Leaf with a tuneful assault on the body of his acoustic guitar. Allied to the virtuoso technique is his knack for a great songwriting.
Gloria tells a tale of young love with a wry northern wit and perhaps the most conventional pop structure in Gomm’s canon, aside from the percussive body beats and distorted solo, naturally.
Further proof he can do chart-friendly is offered on his slap happy cover of Chaka Khan’s Ain’t Nobody which blends bass, drums and the vocal line into one funky instrumental whole. He ends the evening with a stunner, taking to a tabletop in the midst of the crowd to deliver an unplugged cover of Radiohead’s High and Dry.
It is a special moment as those whose jaws are not on the floor sing along to the chorus in low, reverential tones. And with it Gomm moves on, the following night to a social club, in Leeds, where his next set of disciples in the making are waiting. Amen to that.