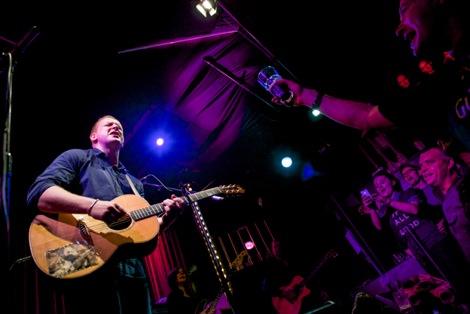 Damien Dempsey brought a tempestuous form of intimacy and fine song craft to the Kazimier, Getintothis’ Alan O’Hare was swept along on a wing and a prayer.

Irish folk singing hero Damien Dempsey has been coming to Liverpool for years. But never like this.
The Irish Sea Sessions and Liverpool Irish Festival veteran arrived at a near sold out Kazimier with a band in tow. And they rocked.
Dempsey’s producer, John Reynolds (who also works with Sinéad O’Connor), powered the five piece from behind the drum kit with the drive of someone who knows the songs inside out and his force set the agenda from the off. Liverpool was in the mood to sing and Dempsey never needs asking twice.
Opening with Sing All Your Cares Away – from his second album, Shots, the record which brought him Bob Dylan and Morrissey support slots – the mood was set in stone: big hearted anthems, minor key laments, lung-busting broadsides and communal sing-a-longs. It was exceptional.
Dempsey sings like nobody else.
In one song, he’s a noble savage singing long and deep about tribal structure and civilisation (the improbable Massai), then, in the next, his falsetto is carrying us above the clouds with a tale of inner city “tongues that spoke like a fist” (the gorgeous Canadian Geese).
The sound is great and filled with all the colours of the rainbow: melodic bass runs, colourful electric guitar, keyboard flourishes and Irish flute and whistle from ever-present Dempsey sideman, Eamon de Barra, give the gig a real eclectic feel and the band are seriously hot.
Many in the crowd are seasoned ‘Damo‘ gig goers and it’s fair to say that they’ve never seen him rock like this.
It wasn’t just lumpen meat and potatoes fare though – make no mistake, Dempsey’s songs are about more than their transformative lyrics and the reggae-tinged Negative Vibes was a real highlight. 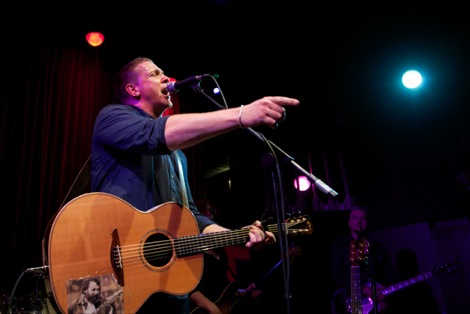 Damian Dempsey at the Kazimier, Liverpool
The Donaghmede songwriter is a force of a nature on a live stage and never was it more apparent than within the intimate space of the Kazimier – there were times the place felt ready to take off.
Colony, The Rocky Road To Dublin, Almighty Love and Bustin’ Outta’ Here – the latter two from 2012’s critically acclaimed Almighty Love LP – all brought gut busting singing performances from Dempsey’s rabid followers and the night felt as though it was taking place in the back room of a Dublin bar.
But not an old fashioned one. We were in a bar where patrons can move forward while looking back, learn while staying true to themselves and “grasp the wealth of themselves” (It’s All Good) with the spirituality of ancient customs. And they don’t come more ancient than communal singing.
True, commercially, Dempsey has never quite risen from the crowd in the UK, though he remains a big seller in Ireland. But it just doesn’t matter. As, like all great folk heroes, his message is passed on inch by inch, yard by yard and city by city; by his followers spreading the word for when he next comes to town. And that’s an almighty love that can sustain an artist forever.
Opening the night was young Kirkdale songwriter, Dominic Dunn. The teenager has been making waves on Liverpool’s acoustic scene for a while now and this was his reward. He didn’t let anybody down.
With Keep Them Tight being a particular highlight, Dunn’s set was peppered with the kind of percussive and modern songwriting that is his stock in trade. Keep your eye on him.