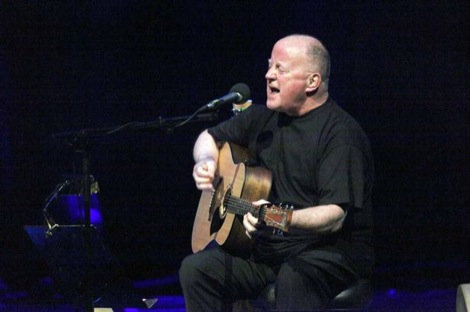 Christy Moore makes time stand still. It’s ironic, really, as the man himself has never stood still. Like a folk singing shark among a shoal of great songs, he’s always kept moving and hunted great material.
He’s never satisfied. In front of a near sell-out Philharmonic Hall, and with a positively ‘hometown’ audience for the eleventh annual Liverpool Irish Festival, Moore, at 67 years of age, could have been forgiven for playing it safe.
Not a chance. He played new and unfamiliar material early on, ignored his biggest selling tunes and spent two hours on the high wire: calling for songs as they came to him, responding to requests and generally following the mood of the room.
The audience were here to listen and the Irishman, alongside guitarist Declan Sinnott, delivered. Folk music flies when a performer gets inside of it and inhabits the stories being sung. Moore is the master of said virtue.
Renditions of North and South (written with U2), Smoke and Strong Whiskey, Yellow Triangle and Listen brought with them a stately grace that melted the Phil. His lightness of touch in between songs brings a breeze to proceedings which could get heavy, and then we’re off again, with big hitters such as Ride On, Black Is The Colour and Woody Guthrie‘s Deportees.
Guthrie wasn’t the only folk hero Moore paid tribute to: a pair of Ewan Macoll songs brought the house down as well. Companeros celebrated Che Guevara and Fidel Castro, before a stunning take on The First Time Ever I Saw Your Face melted the Hope Street hall.
Tears streamed again with a dedication to the late Phil Chevron of The Pogues, as Christy played the guitarist’s own Faithful Departed, before flowing into a perhaps definitive version of Shane Macgowan‘s A Pair Of Brown Eyes.
That’s the grace of Moore and the gift he offers: he revitalises great songs – no matter if they need it or not.