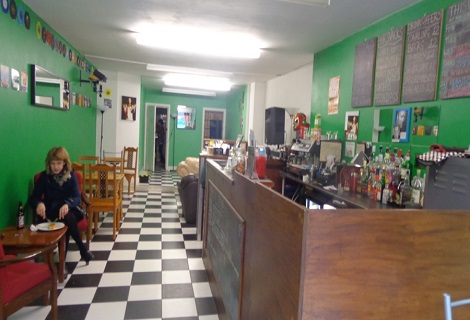 Maguire’s Pizza Bar has fast become one of Liverpool’s flagship DIY venues, Getintothis’ Joseph Viney helps himself to a slice of the action.

Big business runs any city, successful or burgeoning.
In each bustling populace centre, the clear lines can be traced back from the masses to a smaller, more solidified and, ultimately, richer set.
Whatever. It’s the way the world works at the moment, and there’s not a great deal that can be done in the immediate sense.
On the other side of the coin, the artistic communities, generally not awash with money, look to implement new ideas, structures and philosophies through the implementation of communal practice.
It seeks to lean on the thoughts, words and actions of a sub-section of society, aided and abetted by those with any resources and, perhaps most importantly, space.
The closure of venues such as Drop The Dumbells left a DIY music/promotion shaped hole in the city, desperately needing the vacuum to be filled.
And so this brings us to Maguire’s Pizza Bar (Renshaw St, Liverpool), a new venue that has very quickly become one of the city’s most vital and diverse places to be. 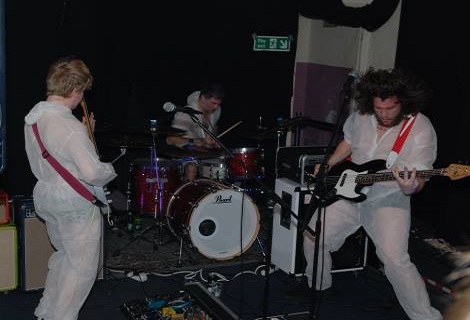 Alpha Male Tea Party laying it on thick at Maguire’s Pizza Bar, Liverpool
The premise is pretty simple.
Maguire’s is an independent business that flogs two of the key ingredients in most people’s lives: pizza and booze.
The décor and general tone reimagines the stylish pizza hangouts of New York; establishments most people on this side of the ocean are only used to seeing through the silver screen.
Black and white pattered flooring, semi-ironic posters and singles plastered on the wall (Kylie and Jason!) and a very down-at-home vibe that welcomes people from all parts of the social spectrum.
They also cater heavily to various dietary requirements (gluten-free, vegan, vegetarian), so for those normally left out in the cold, it’s a welcome port in any culinary storm.
It’s a cheese-topped, tomato-based utopia and furthermore, it’s exactly what Liverpool was crying out for.
Maguire’s seeks to go further than most places, and their liberal attitude towards hosting gigs has seen a massive influx of bands, promoters and artists flock to a parallel of the city that was becoming consumed by rough pubs and an abandoned hardware warehouse.
The free hire of their back room to all-comers has been a genuine blessing for those keen to carve out their own niche, free of the politics and associated pitfalls.
The space is rough and ready, as are most of the bands who play there. At times it is no place for the faint of heart and since it can be anything goes, it usually does.
The room provides a distinct charm, plenty of standing space and enough food and drink to hand to keep even the most unquenchable glutton sated.
In short, it contains all of the elements that makes a free, DIY venue such an important place to play, visit and be a part of.
Agitprop renegade label Antipop have made fine use of it already; their Punk Rock Pizza nights quickly becoming the city’s byword for fast, loud and guttural.
Behind The Wall of Sleep have even been in on the act too, presenting their doom-laden stock to a set of exponentially growing followers.
Even the past couple of months has seen groups of the calibre of Islet, Alpha Male Tea Party, Cleft, Norweb and The Stopouts grace the cavernous back room.
Not ones to rest on their laurels, Liverpool’s bands and promoters are quickly sewing up a slew of gigs for the immediate future.
Wax Futures head up a five-band bill on Thursday November 28, Pale Angels and Scouts hit the Maguire’s trail on Wednesday December 11 and Gentleman’s Pistols threaten to bring the house down on Friday December 20.
It’s been a fantastic first year for Maguire’s, and 2014 looks as if it can only be better for a venue that brings together the best of all worlds.
For further information on Maguire’s click here.