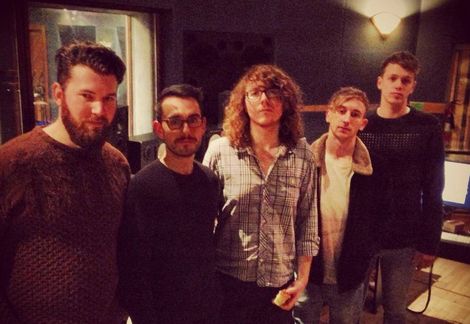 It’s not just Dan Croll flying the flag for Stoke. There’s a healthy raft of new music rattling from this Midlands industrial fortress, Getintothis’ Steve Hammersley gives us the lowdown.

Dan Croll will no doubt be doing Liverpool proud in 2014 with the release of his debut album but let’s not forget that this is his adoptive hometown.
Dan was born and raised in the environs of Stoke-On-Trent, a city, on first glance, with a lot less to be proud of, with regeneration plans repeatedly sidelined and traditional industries in decline. But a creative regeneration spearheaded by a blossoming live music scene should be on the cards.
Main venue, The Sugarmill, voted by NME as the Best Midlands Small Venue in 2011, 2012 and 2013, keeps smaller venues such as The Underground, The Exchange and The Venue on their toes.
The Old Brown Jug, The Full Moon and The Rigger in neighbouring Newcastle-Under-Lyme also attract avid live music fans. The gigging options for locally grown talent have never been better.
The scene is supported by BBC Introducing Stoke and 6 Towns Radio while independent promoters are springing up to boost the night time economy. It’s not surprising that a number of bands are breaking out of the local fishbowl, gigging out of town, and seeking attention from a wider audience.
Alfa 9 are now regarded as elder statesmen of the current Stoke scene and certainly set the current psychedelic time-bomb ticking years before.
They earned deserved attention with their debut Then We Begin (2005) and ended up rubbing shoulders with Echo & The Bunnymen, The Coral and Icicle Works.
Returning in 2013 with Gone To Ground, their masterpiece second album, they played Liverpool Psych Fest, had single El Morocco playlisted by BBC 6 Music and sessioned on Dave Monks’ Radio Merseyside show in autumn.
They played at District in November and will be back in Liverpool in 2014 as label Blow Up celebrates its 20th year.

Psyence are the band of the moment crafting a heavy psych sound with melodies to compete with Tame Impala.
Alex Wynne at Blak Hand Design has added his majik to their look. Live performances are truly stunning with Martin Blunt (Charlatans) touting them as best live band he’d seen in 10 years.
They took their opportunity at the Psych Fest brilliantly, returned in November at District and hit the Shipping Forecast in March. 2014 should be a good year for them.

Moscow have been one of the standout live bands in 2013.
From a clutch of bands in Stoke doing a kind of dirty garage blues these guys are clearly the best exponents. Fearless frontman Nic Andrews was recently described as “Ian Curtis meets Jim Morrison meets Jesus“.
A tight rhythm section, pulsating bass-lines and a guitar sound like a mythical beast trapped in a vortex provide the soundtrack to Andrews’ dark psycho-doom tales of modern alienation.
A 5-track EP was released in 2013 and March will see the launch of their second containing the already live classic Pack Animals.

Camp Stag got to play the BBC Introducing Stage at Glastonbury in 2013 and already have several quality releases to their name.
Indie with a stadium appeal, Camp Stag manage to project an image that is tastefully and artfully understated. Lovely light dynamics lead to bursts of power that reveal an intelligence in their song construction. Someone should invite them to play Leaf Tea Shop!

Barely 12 months old and Delamere have just signed a deal with Scruff Of The Neck.
A debut single has been recorded at Parr Street in Liverpool (see main image) with the launch planned for the Deaf Institute in Manchester on Saturday March 8.
Winners of the Road to Blissfields competition last year, Delamere’s spacious sound and clear vocal lines recall Foals style alt-indie for a mass audience

Narrowing a scene bursting with talent to five acts is not easy and so a 30 minute exploration through the Facebook and Souncloud search engines will further enlighten those yet to discover Stoke’s treasure.
If you care to do so, begin with Malthouse, South Wall Corner Club, Holly Pender, Ruby Dukes, Vellocet, Dirty Money No5, The John MacLeod Band, Ghost Trains, Pickering White and The English. Furthermore, we and all of these bands hope to see you very soon.
Further reading on Getintothis: