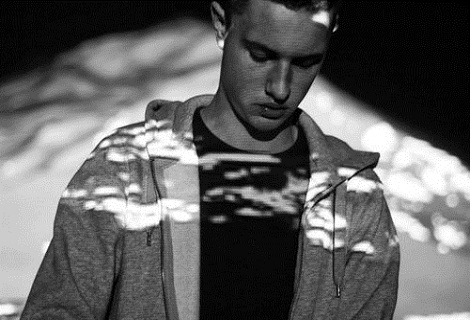 Wirral producer returns and pushes the Tri Angle Records template into further out there territory.

Waterfall, is latest track to drop from Evian Christ‘s forthcoming eponymous EP.
Something more akin to Logos and Mumdance‘s dystopic take on grime than anything we’re used to from the Tri Angle stable. But maybe that’s a good thing – where his peers share a characteristically downcast, warped and heavily informed by bedroom R&B, Evian is taking us down a new path (Tri Angle phase II?).
First sneaking onto the scene in 2012 with the Kings and Them EP while training to be a teacher at Edge Hill in Ormskirk, Evian Christ was pigeonholed into that wave of ghostly, slightly menacing hip-hop that percolated in the wake of Clams Casino.
After getting called up to help out on last year’s totemic Yeezus, things began taking a leftward turn with his Duga-3 piece for Record Store Day 2013 (living up to his “make the weirdest shit you can think of” mantra). His time with the master was beginning to rub off on him, drip feeding us some of the best slices of avant hip-hop this side of Shabazz Palaces – until we come to this – Waterfall.
The ethereal qualities are still there, but it’s buried beneath militaristic, unstable beats and industrial clang. His new material may have lost its malleable, billowing edge, but it more than makes up for that with cyclopean clangs and warped whines that demand you to listen closely to find the nuances; a lot more rewarding (if less immediate) that MYD or Fuck It None of Y’all Don’t Rap.
Please, sir, can we have some more.