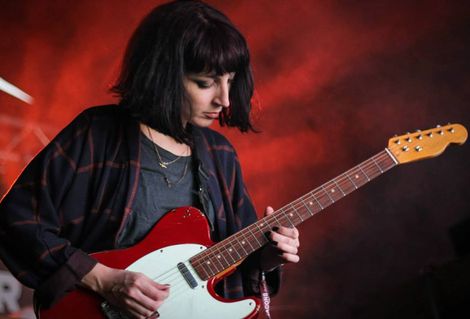 Psych supergroup Menace Beach are bringing some lazy sunshine to your lives, Getintothis’ Joseph Viney gets up early to lay his towel down.

It’s a supergroup featuring members of Hookworms, Sky Larkin, Komakino and You Animals: what could go wrong?
Not a lot as it happens, as Menace Beach’s debut EP Lowtalker is a short, sharp knock to the senses that gives you enough to satisfy but still leaves you expecting, nay, demanding more.
The hazy-dazey wurlitzer vibes of opener Fortune Teller marries a MBV-esque dream-sound to Pavement’s slow grind with a dash of the Beach Boys’ oddly-dystopian beach bum life aspirations.
On the periphery of Lowtalker is a sinister beast waiting to come out. Honolulu’s thudding bass intro gives way to a to hard-hitting chorus that allows you the temptation of some strobe-lit air guitar fantasies.
Where I Come From is a mystery in itself for a group yet to reveal the full extent of their powers while the piercing drive of Nervous shows they’re anything but.
Let’s hope a Liverpool date is in the offing, and soon.