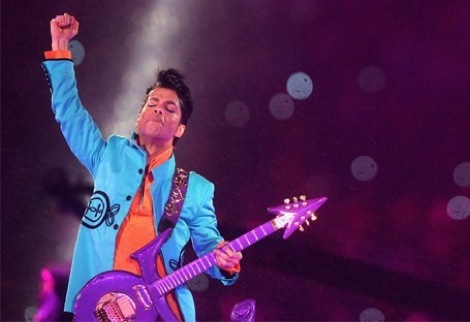 Ahead of Bruno Mars’ performance at Super Bowl XLVIII, Getintothis reflects on the best half-time shows from grid iron history.

1. Prince, the world’s master of ceremonies, gave an unparalleled Super Bowl half-time show in the lashing (purple) rain at the Sun Life Stadium in Florida.
Prince married classics Lets Go Crazy, Baby I’m A Star with vintage covers, All Along The Watchtower, Proud Mary before closing with a transcendental Purple Rain – all on top of a whopping symbol. He even made The Foo Fighters listenable. Nothing compares.

2. Beyoncé‘s medley ran like a machine of pop gold nuggets, which, twinned to her superwoman stage show made for super fierce viewing.
Run The World, Crazy In Love, Baby Boy, Bootylicious, Independent Women, Single Ladies – complete with Destiny’s Childs‘ Kelly Rowland and Michelle Williams before closing with Halo – what more do you need?

3. Magic, dangerous moves, card tricks, Billie Jean and 3,500 LA kids singing Heal The World, Michael Jackson‘s Rose Bowl show in Pasadena in 1993 was the stuff of legend. Hell, he didn’t even move for two and a half minutes of his performance – even standing still was an event.

4. Paul McCartney‘s 2005 display is a whopper. There’s few tracks better suited to a half-time show than, Live And Let Die. The fact that Macca does it in M&S knitwear makes it even better.

5. In 2002 at Louisiana Superdome in New Orleans, Louisiana, U2 did what U2 always do – combine unbelievable tunes with unbelievable verbosity and egotistical bluster. It’s a conundrum we’ve written about before. You have to take your hat off to the big balloons, they’re very good at this kind of thing.

6. Absolutely nothing was good about the 2001 Super Bowl half-time at the Raymond James Stadium in Tampa. From Ben Stiller and Adam Sandler‘s awful skit intro, Aerosmith‘s wanky AoR rock to ‘N Sync‘s lame bedwetting pop.
That is, until Britney Spears entered the fray to inject some much needed sass into Walk This Way. Overnight, Justin Timberlake became a man. Nelly was quite good, too.

7. A sheer WTF moment. Forget Janet Jackson‘s nipple, Disney produced this fantastical pageant of farce that could only go down in the States. Titled The Tapestry of Nations, a cast including Tina Turner, Christina Aguilera, Enrique Iglesias, Toni Braxton and an 80-strong choir wheeled out the most bizarre throng of drug-induced oddness ever. Then Phil Collins popped up in a beret. Yerse.