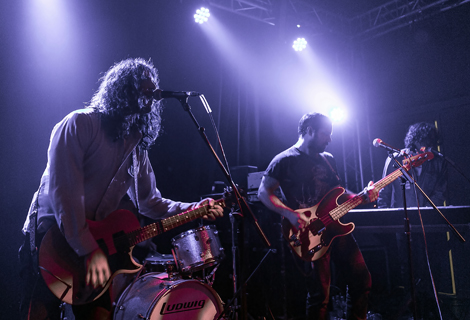 Brooklyn’s The Men provide power and a lot of noise, sadly their subtlety and dynamics are drowned out in a haze of ragged rawness, Getintothis’ Chris Burgess draws on the positives within the monotony.

Brooklyn’s The Men are an intriguing and hard to pin down band. To some extent they wear their influences on their sleeve, while also shifting genres from album to album, leaving you wondering where they’re heading next.
Mixing elements of punk, noise rock, garage and country, it’s almost impossible to define their sound on record. Everything they do, however, seems to have a grungy, neo-psychedelic edge to it.
With scant introduction – singer Mark Perro‘s nonchalant “we’re The Men by the way” one of the rare moments of crowd interaction – we were underway, at a half full venue.
Opener Lotus was an instrumental, two-chord wall of noise – suggesting that this wasn’t going to be an intimate affair. The follow-up Lazarus, taken from their second album Leave Home, trod the same path, with big riffs and Krautrock-style synths thrown in for good measure.
It was only three songs in, the gloriously anthemic Different Days that the band began to loosen slightly. Perro‘s vocals finally cutting through the noise. “I’m waiting for the tide to fade” he sang, rather aptly.
The tone was then set for the night, a mix of songs from their new album Tomorrow’s Hits and faster, older, perhaps more raw-sounding material. 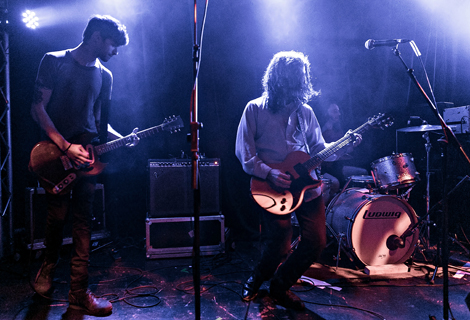 The Men live at East Village Arts Club
Their more moody, slower tunes such as If You Leave, bringing Hammond organ to the fore, provided a level of claustrophobic tension to the music. Threatening to turn EVAC into the bar out of From Dusk Til Dawn, with vampire threats seemingly inevitable, the song’s slow build up exploded into life, with wailing vocals and expansive guitar sounds.
The seedy bar band theme continued throughout, with the fantastically grubby Dark Waltz providing the clearest insight into the world of The Men all night, with a tale of a nefarious uncle who “sold weed and carried a gun“. The song quickly turning into a jam session, complete with Neil Young-esque guitar solos.
An extended version of Going Down was one of the highlights of the night. It roared along fuzzily at breakneck speed, its big, choppy riffs and psychedelic solos meshing together brilliantly.
Sadly, due to the rather muddy results of EVAC‘s soundboard struggling to cope with the sheer volume of the set, the end result was that all subtlety and nuance was lost for large sections of the gig.
For example Pearly Gates, one of the craziest songs The Men have recorded, lost all of its out-there flourish and sounded neutered. Their drums and keyboards struggled to be heard over the distorted guitars, and the vocals were at times impenetrable.
As much as it pains me to say it, the minimal stage lighting, with just the bare glimmer of light, combined with the band’s equally minimal movement onstage also meant that this was a rather lacklustre affair.
Ultimately, the big wall of sound became too monotonous, and the lack of dynamics within the set rendered the entire process slightly uniform and dull.
While still being interesting and intriguing, the gig overall could be seen by outsiders as just an hour of loud garage music. It was appreciated by fans of the band, but anyone unfamiliar would not have been moved at all. 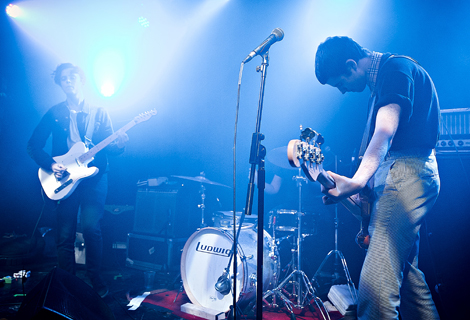 Baby Strange live at East Village Arts Club
Support act Baby Strange, have been quietly sneaking under the radar for a year or so now. The Glaswegian three-piece provided an energetic and agreeably sleazy set of reverb-laden, grungy punk rock, complete with catchy, sing-a-long choruses.
Their brand of darkness did perhaps stay a little one-dimensional though, and quickly became predictable. They do still seem to have a lot of potential, but perhaps need to broaden their sound a little more to realise it.
Pictures by Getintothis‘ Tomas Adam
Further reading on Getintothis:
Getintothis names The Men’s Pearly Gates Single of the Week.
Getintothis reviews The Men, Being Jo Francis, The Temps: The Kazimier, Liverpool.
The Men’s Open Your Heart named in Getintothis‘ top 100 albums of 2012.
Introducing Lapsley: The GIT Award 2014 One To Watch winner
The GIT Award 2014: the shortlisted nominees in detail
Trans, Plank: The Shipping Forecast, Liverpool
Bombay Bicycle Club: O2 Academy, Liverpool
Threshold Festival 2014: review and pictures part two
Ian Broudie and Royal Liverpool Philharmonic Orchestra: Liverpool Philharmonic Hall