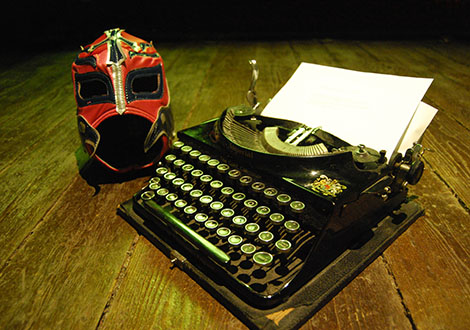 They’re calling it, Sancho Panza.
On Thursday April 17, Liverpool’s Wild Writers are putting a 14 foot wrestling ring smack in the centre of The Kazimier turning it into a lucha amphitheatre.
For this is a world away from your standard literary nights. The Wild Writers don’t do silent poetry nights or discussion forums; they offer raucous, interactive events that grow more unusual than the last.
This time they’ve six masked lucha writers to enter a wrestling ring and face a literary competition like nothing Liverpool has seen before. The masked writers will be given five minutes to write a short story, projected for all to see. The losers get unmasked, the winner is given the Sancho Panza World Heavyweight Title Belt. Obviously.
The ring will not only hold a masked lucha writing competition, it’ll also feature professional wrestling from Infinite Promotions. Frog -splashing, ball-busting, choke-slamming action guaranteed.
There will of course be music – from wrestling intro specialists, Spanish Announce Team, playing the best tracks from the 1980s all the way to the present day – expect Hulk Hogan, Shawn Michaels, Steve Austin.. you get the picture.
So if you go to one wrestling-writing-South American themed night this year you should probably head to this one.
Further reading on Getintothis:
Used Vinyl Club present 28 Costumes, Spanish Announce Team.
Flying in the face of adversity – the demise of the music press in the digital age
Viper Kings with Dave McCabe & Coral‘s James Skelly join UCG and anti-fracking District gig