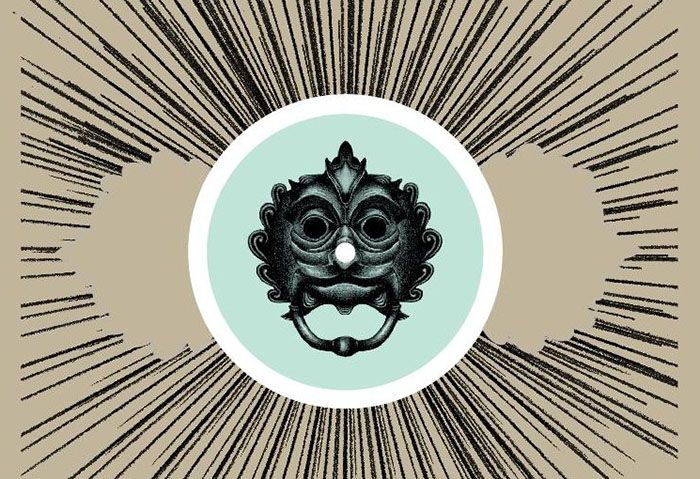 Mugstar have gained a reputation as one of the city’s top psych acts, and have now launched a new label God Unknown Records. Getintothis’ Harry Sumnall explains why this is great news for all psych-heads.

Liverpool institution Mugstar have gained international respect and devotion through their passionate dedication to the righteous riff and psychotropic jams. Across seven albums, a decade of epic tours, and numerous audiovisual delights they could be forgiven for settling down into the comfortable heavy psych dotage and shapeless repetition that besets bands of a certain age.  Their individuation and invigoration, or more precisely bassist Jason Stoll’s, arrives with the launch of God Unknown Records, with an inaugural release set for September 2014. The new label has been a long time in gestation and is inspired by Mugstar’s positive experiences of working with visionaries on their own releases, and by fellow travellers such as Rocket Records, Cardinal Fuzz, and in particular Southern Record’s Latitude series

The label’s first enterprise is the Singles Club (Volume 1). Over the course of a year subscribers will receive 10 x 7” singles from familiar luminaries such as Acid Mother’s Temple, Bardo Pond, Cloudland Canyon, Oneida, and of course, Mugstar themselves. There are only 200 subscriptions available, which provides listeners with a readymade set of future rarities. The first volume comprises bands that Stoll has developed friendships with over the years, and focuses on well-established artists who have been chosen because they have either taken the genre in new directions or whose music forms a central part of their lifestyle. Also in the pipeline is the debut album from Liverpool’s Mind Mountain, a solo album from Mugstar’s Peter Smyth, and other works by North and South American trippers. Although a second volume in the subscription series is planned, it’s a solid launch platform and we eagerly await the discovery of newer artists on future releases. Stoll meanwhile has set his sights high, namechecking Swans, Melvins, and Goats as dream artists he would like to work with.

The label has a strong visual identity, coordinated by Liverpool Psych Festival designer Sam Wiehl, which means that whilst the label aesthetic is unique and the artist roster international, it’s also firmly embedded in Liverpool’s creative milieu. Wiehl, a long standing friend and collaborator created his work in response to Stoll’s initial sketches, with the instruction to ensure God Unknown would become immediately identifiable, something which Stoll  identifies as a strength of labels such as Trouble in Mind. 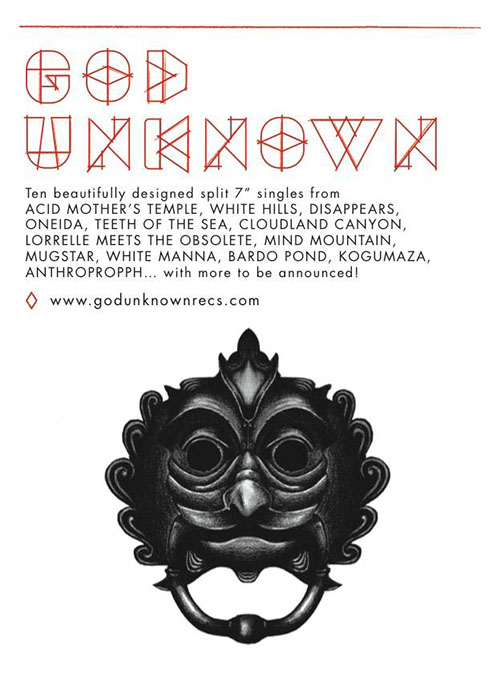 It’s always exciting to discover new labels, particularly ones that are attempting to break away from the generic model that has struggled so badly over the last few years. Whether through artist roster, design ethic, or simple determination to produce something that is bewildering in its business model (we’re looking at you Polytechnique Youth), it’s those labels willing to take a risk that often become most beloved. There are important times ahead for God Unknown, and we hope to be writing a rich and fulfilling retrospective in the years to come.

Gnod – The World is Good

The latest revelation of the ever changing Gnod parsufim is this fine evocation of early 70s Don Cherry at his cosmic finest. A slow, undulating wood and brass matrix, punctuated by throbbing bass and a cool wave of subdued electronic feedback. Seriously, one of the best tracks Gnod have ever produced.

A mescal washed slo-jam from Thrill Jockey’s Portland based guitar beatniks. Dense and obfuscated, the band sound like they’ve been locked in some rickety backwoods cabin and have been told they’re not allowed to leave until their collective anima is down on tape.

Section 487 of the heavy live jam that Makoto and chums first picked out 20 years ago. With a burbling synth beamed in direct from Tim Blake circa 1973, and a piercing coda that will shatter the vinyl upon first listen, this is classic AMT.