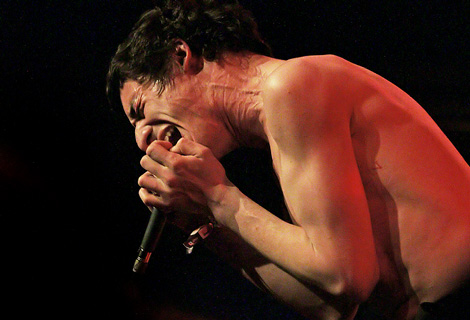 Palma Violets, Fat White Family and more head up 20th Anniversary of annual NME Awards Tour in 2015 – but they won’t be calling at Liverpool, Getintothis’ Peter Guy laments the current state of play.

For 20 years now, the NME Awards Tour have kick-started the new year gig fixture list on an annual scale.

With January the metaphorical dustbowl on the live music circuit, the Awards Tour, arriving in early February acts as a clarion call for everyone to pull on their Chuck Taylor’s, dig out their seven-year-old band t-shirt and head for the nearest student union.

And tonight, the 2015 line up and tour dates have been announced with Palma Violets, Fat White Family, The Amazing Snakeheads and Slaves set to play every major city in the country – Sheffield, Leeds, Newcastle, Glasgow, Nottingham, Manchester, Oxford, Birmingham, Bristol, Portsmouth, London. Except Liverpool.

Now, we’ve been here before. The Awards Tour skipped Liverpool for two consecutive years in 2010-12 returning in 2013 with Django Django heading the line up before Interpol, together with new Liverpool bucks, Circa Waves made their debut on home turf earlier in 2014.

But what makes this announcement tonight resonate all the more, is that during the three years Liverpool was bypassed there was no student union available – Liverpool Guild was shut for refurbishment and in 2014, the O2 Academy, who share agents and bookers with the Guild, hosted the Interpol headlining date.

In 2015, however, Liverpool’s student union is back. And with possibly the finest equipment possible – just take a look at our feature on the revamp.

The reason surely comes back to simple numbers: the Interpol date didn’t sell out. The rest of the NME Awards Tour did. And this is a problem endemic in Liverpool.

It recalls one of the biggest online Liverpool music talking points of the year – when Scroobius Pip dared to call out the city on October 1 for his Speech Development UK tour, saying, “When I last toured, Liverpool was left off of the list. This was due to promoters struggling there for a while now. It had become the norm that you could have better luck in places like Preston (which may shock a lot of people).”

He added: “Liverpool will be left off more and more tours the more the locals don’t support live music. Its a mind blowing one as…well…. IT’S LIVERPOOL!” [Read his full post in full here.]

Dozens were quick to wade into Scroobius and defend the city’s gig going culture, however, this is a topic which rears its head far too regularly.

We recently chatted with one Liverpool promoter who said it was no surprise developers were knocking up flats with little regard for the scene’s inner city venues – as live music in the city regularly struggles. Nor was it a surprise venues shut and few new ones open. And you certainly can’t blame it on the promoters or venue staff.

Contrast this with Manchester (sure it has almost triple the population) but does that city have a thirst for live music three times that of Liverpool? It’s not a new problem – and it is one which seemingly will continue. What we can all do to change that is very much up for debate.

But for now, one of the UK’s flagship touring entities will not be coming to Liverpool and it will be calling at every other major UK city. In a further ironic twist, tomorrow morning, two of the city’s live music venues’ futures are very much up for serious debate. Liverpool minus the Kazimier and Nation simply doesn’t bear thinking about.