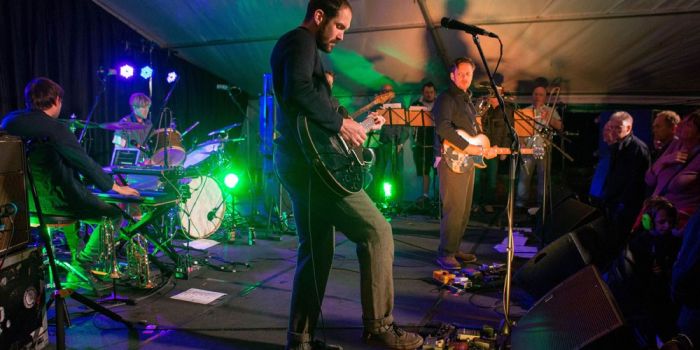 British Sea Power performed at the Bournemouth Arts by the Sea Festival, Getintothis’ Paul Higham visited Brownsea Island to check them out.

We at Getintothis are always keen to support the cultural and artistic endeavours of other towns and cities in the UK. With that in mind we made the long trip to the south coast to see British Sea Power play the closing show of last year’s Bournemouth Arts by the Sea Festival.

Each Autumn Arts Bournemouth puts on a terrific festival across a range of sites that celebrates the arts in its many and varied forms encompassing dance, theatre, performance, visual art, literature, spoken word, and, of course, music. It is an outstanding and engaging concept and succeeds in making such varied art forms accessible to the people as well as providing a much-needed platform to enable artists, both local and international, to find a wider audience. It is a broad and ambitious concept that could be brought to many more of our towns and cities.

Following on from their live soundtrack performance to the Man of Aran film at 2013’s festival, British Sea Power returned to play on Brownsea Island, a National Trust reserve located in Poole Harbour. As the island is home to a red squirrel nature reserve and provides a thriving habitat for a myriad of other species, the choice of British Sea Power to play there was a perfect marriage. The band have become famous for playing in unusual settings (they’ve even played aboard a ferry on our very own River Mersey) and, through their music, have long displayed an interest in the natural world.

Although not a Sea of Brass event, the day started with a performance by the Bournemouth Symphony Orchestra Brass Quintet aboard the Maid of Poole ferry as we toured the harbour en route to the island – the scenic harbour tour all but marred by the persistent rain and looming coastal mists. The brass quintet were joined by British Sea Power’s Yan who played a solo acoustic version of The Lonely before being joined by the brass section for Radio Goddard taken from their Machineries of Joy LP. For the more nervous sailors, Fear of Drowning was perhaps wisely held back for the main set later!

Despite the atrocious weather undermining the idyllic harbour-side setting (we were most grateful for the marquee covering!), the band put on a terrific performance in front of a privileged audience numbering little more than two hundred people. They sacrificed the power and volume of their recent tour for more delicate and subtle arrangements with Oh Larsen B and The Great Skua ably demonstrating British Sea Power‘s affinity with the environment. Set highlights included the rarely played Moley and Me and Bear from the Zeus EP, the latter ending in a memorable swirl of hypnotic motorik rhythms and frenetic keyboard playing from both Phil and Noble.

The brass quintet joined the band for the gig’s mid-section before the tempo picked up. A rousing Remember Me was quickly followed by Do You Like Rock Music’s Lights Out For Darker Skies before Hamilton resumed lead vocals on a well-delivered version of Loving Animals and crowd favourite, No Lucifer.

With an encore of Carrion, the night was over and we were soon aboard the ferry and heading back to shore in howling wind and driving rain. As land approached, the thoughts of ‘heavy water’ enfolding and ‘being draped in kelp below by 8,000 feet’ subsided to be replaced by that warm feeling of seeing a band comfortable in their own skin play an enthusiastically received set to their appreciative and dedicated fan-base.

Arts Bournemouth, together with British Sea Power themselves, deserve much credit for putting on such an event and for taking risks in an effort to bring new and interesting artistic experiences to its audience. Let’s hope it provides a template to be followed elsewhere.