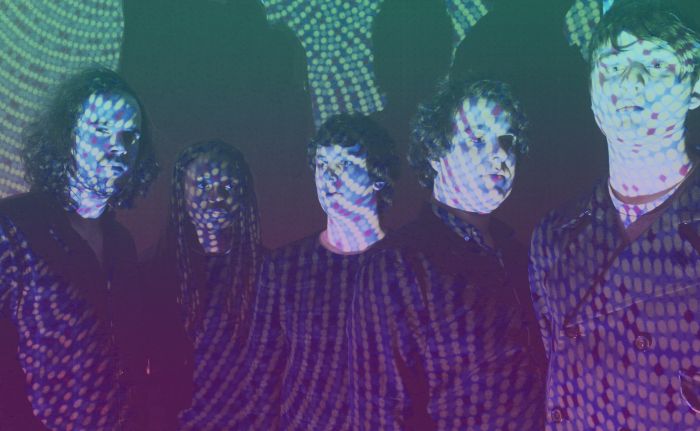 Being in the right place, at the right time, is a remarkable thing. Especially in the music game.

You can’t plan it, of course. Sure, you can work hard, get yourself in the right spots and spend all your time and money on refining and defining your sound. But luck plays a massive part in being successful… always has and always will.

Imagine Paul McCartney hadn’t known the chords and lyrics to Eddie Cochran‘s Twenty Flight Rock on that fateful afternoon in Woolton. Try and picture stadium rock history if Mick Jagger hadn’t been on the same train platform as Keith Richards. And put yourself in a world where Dr Dre never met Eazy E. Unthinkable.

Call it kismet, the zeitgeist… whatever. If you cross paths with destiny and it looks you straight between the eyes, your luck might be in. Especially in 2015 when second chances in the music game are as rare as a great live performance on terrestrial television.

Gulf sound like right now. With three guitarists, trippy artwork and a drummer who could get a job with any Chic tribute band, this is their time. A handful of songs have been released online – but this is a group still very much taking baby steps. The punchline? Those baby steps have already walked them into cult hero status.

“Those recordings are essentially demos,” whispers softly-spoken guitarist, Tom Murray. “We never thought what has happened, would happen! It was such a surprise when we heard that radio had taken to them.” Come on, Tom… you guys know what you’re doing. Right?

“I’ve only been with the band for six months or so, I was the last to join,” he laughs. “But the attention has been surreal, honestly. We have tried to give off an elusive vibe and keep the fuss down to a minimum, to let the focus rest on the music.“

Let’s focus on the music, then – and come back to the mainstream hype (Guardian ‘Band of the Week’, Echo & The Bunnymen support slots) later.

With those three guitars each trying to out-gorgeous each other and reverb-drenched, clipped six string lines funking up the space, Gulf are taking their place at Nile Rodgers‘ right hand. Johnny Marr – think Electronic, not The Smiths – would be proud of the Rodgers hero worship going on here, but the five piece plough their own furrow.

They’ve found a psychedelic place to occupy too, but one that pays strict attention to melody and structure. “It’s fundamentally pop music,” agrees Tom.

“But from a different approach – we write indirect pop, I think. Our writing process can start quite proggy’ really, but Josh (Gorman, drums) is the one for structure in the band. He’s really good at working through the process and his pop sensibilities always come to the fore.“

Those pop sensibilities could be the key to the band’s future – comparisons have been drawn with Tame Impala, Temples and Childhood, but Gulf have the potential to be bigger than that. If Daft Punk had been born in, say, Fazakerley, instead of France, then their guitars might have arrived earlier and have the same dreamy quality of these boys.

Getintothis favourites Outfit and By The Sea are influences here, too, and playing live more will surely bring the band more plaudits. “We’ve got an exciting summer coming up,” reveals Tom.

“We’re working on the set now, refining it. We supported By The Sea at The Epstein Theatre late last year and it just brilliant to see a Liverpool band interacting with a big Liverpool crowd, if you see what I mean…“

We do. “That gig really inspired us. Even though we’ve kept a relatively low profile, we still want people to be engaged at our gigs and interacting with us… we certainly aim to get them dancing!“

They shouldn’t have any problems, there. Not if tunes like Tell Me Again are any indication of the album Gulf are working on. With an incessant beat, irresistible guitar movement, slippery synth and a vocal filed with northern soul, this is the best song New Order never wrote. Emitter is a belter of similar quality, too… with those clipped guitar lines coming over all Chic again.

“Nile Rodgers is definitely an influence on our guitar style,” says Tom. “We’re knee deep in funky guitars and we all love that later Daft Punk sound, too. But the pop thing is always there and I always think there’s a bit of Motown in our music, it’s choppy and poppy, even if it’s not straight up pop.” He’s right. And straight up pop is overrated anyway… we all love a bit if gritty funk under our dancing shoes. Gulf will only get grittier live, too. “The music is definitely louder live – it’s dancing music,” laughs Tom.

You suspect there is going to be a big visual element to what Gulf do live. The band pay strict attention to the presentation and aesthetic of their music and their ethos is as crystalline as their recordings. Clean and crisp are words you’d use to describe all your favourite literate pop bands – think Talking Heads and The Wild Swans – and this lot are no different.

They’re not too cool to remain casual about a GIT nomination, though! “It’s amazing! We’re really happy about it,” reveals Tom. “We’ve followed the GIT Awards since they started and we were really happy when By The Sea got nominated last year… they should have been up for it again! But we’re just happy to be on the shortlist.“

What about your chances of winning? “Wow… well, we love the likes of All We Are and Circa Waves, so it’s just great to be nominated with them,” says the guitarist.

There won’t be many nominees with better sounding records, that’s a fact. Gulf‘s music appears effortless and it’s that Gelstat which is driving the band forward at a frightening pace. They may well be keeping a low profile, but the tautness of their tunes reveals all about them: they’re here to contend.

Where they arrive next could be the defining sound of Merseyside for 2015.