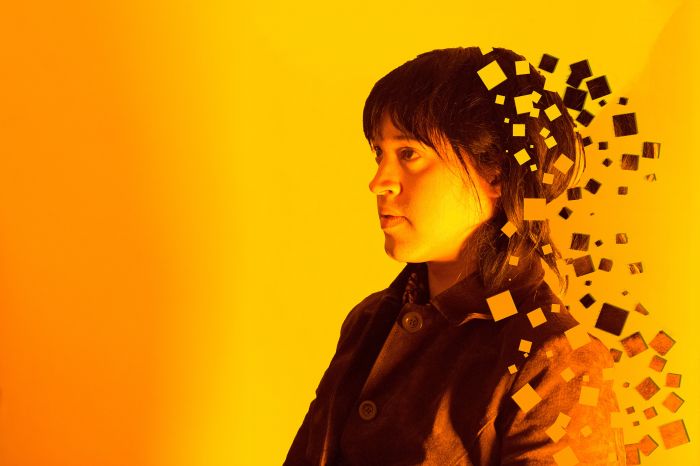 With recordings of his work circulating for over a decade, Getintothis’ Harry Sumnall explores the staccato career of Liverpool enigma Esa Shields.

Esa Shields will be a name familiar to relatively few in the Liverpool music scene, though his various tapes and CDs have been circulating for over a decade.

His formal output is rare; an appearance on the Super Numeri compiled Enochian Way sound collage back in 2005, and sporadic live performances in various well-remembered bands (Snap Ant, Sybil, Krautrock, Dominoes, early incarnations of Sea Witches). More typically though, he was to be found on stage with his backing tracks, fine stage outfits, and a constant battle against audience apathy (legend has it he once performed behind a closed door set up on stage).

For several years he seemed to vanish almost completely from the Merseyside music scene, something that he tells us as we catch up to discuss his GIT Award 2015 nomination was due to lack of energy, perceptions of poor reception, and an unrealised need to recreate his complex musical visions in public performance.

It’s a tale common to many musicians – it gets harder and harder to find the desire to continue, while around you bands who can succinctly capture the musical moment are rising. Nothing wrong with that of course, but when you are trying to craft a music scene that has not yet happened, continually putting in more energy and effort than the listener is largely self-defeating, and it is easy to let all the good promise slowly drift away.

Sure, you may be rediscovered in 30 years time, or thrive in your obscure legendary status, but sometimes, even the artistically pure at heart require recognition and praise.

But slowly, signs began to emerge that Esa was rediscovering his voice and his direction. Back in 2012 two videos of songs, directed by noted Liverpool artist Chiz Turnross, quietly emerged, suggesting that something special was happening, completely at its own pace and on Esa’s own terms. Monde Capricorn was a beautiful colour organ driven hotline to benevolent alien consciousness. Shelly Duvall reminded us of those ‘at home with’ features published in Sunday supplements, except Esa’s version seemed edited by Chappaqua director Conrad Rooks.

A few solo gigs and DJ soundtrack sets followed, but again this was a subtle presence, teasing us that something greater was to follow.

We had witnessed false starts before. What would become 2014’s majestic Ovum Caper album was in fact recorded back in 2008 but only shared amongst friends. Other abandoned albums followed, but like the unspoken infrasonic bonds in Shane Caruth’s Upstream Color, across Europe, firstly in France, and then Germany, the right people were beginning to take notice.

Once the stars were correctly aligned, Germany’s Gagarin Records were ready to release Ovum Caper. Further publicity came with a prestigious appearance on Wire magazine’s cover mounted CD, with Esa’s music introduced as recorded in a Toxteth house where “Broken clocks on the walls disrupted the passage of time for its mostly nocturnal inhabitants.” Perfectly summing up both the process and outcome of his music making.

At last it seems that Esa is receiving the attention and focus that his music deserves.

He is an artist who crafts exquisitely short slices of psychotronic weirdness and futuristic pop; musical idiosyncrasies that avoid the traps of being merely kitsch ironic curiosities.

Although unashamedly lo-fi in its approach, his works are hugely ambitious; combining intricate and busy audio bricolage with an acute sense of structure: jouissance, duende and playfulness through shimmering guitar, broken clockwork synthesisers and dust blowing home organ drum machines. You can imagine that this creativity would be completely destroyed if given ‘helpful’ production support and promotional direction by a commercially orientated label or manager.

Its an approach that heralds back to other unfettered musicians such as the Red Crayola’s Mayo Thompson in the 60s; Bill Holt and his basement masterpiece Dreamies; Athens, Georgia’s wildly creative Elephant 6 collective.

Although Esa tells us that there is no over arching concept to Ovum Caper, its Moulin Rouge pufferfish artwork (by hugely talented Liverpool illustrator Rhonda Davies) perfectly distils the music; a disorientating sensual hallucination that does not require over-analysis, great understanding or insight; its an aesthetic treat that you just need to allow to wash over you.

A follow up to Ovum Caper, Timeslips, has already been recorded, but unsurprisingly, this has already been shelved by Esa, who feels under no pressure to increase the pace of his musical output.

He takes his time to consider and describe his work, promising new works that will be “slower”, and evoking the spirit of “Meryl Streep” (free associations being a common way for him to describe his music, and they make sense once you think about them).

This is no surprise considering his recording process.

Primarily home recorded onto a hard disk unit, only finished tracks are taken into the studio for final mastering, leaving many others to simply evaporate or, we ponder, join the positive miasma of hidden Liverpool musical treasures. Tracks are built up carefully from looping melodies and unexpected instrumental shifts. Repeated listening reveals subtle phrasings and detail that suggests each line has been deliberately placed in the audio field.

What is refreshing about his music is that it is impossible to make lazy comparisons to other artists or genres and Esa is therefore one of those truly rare Liverpool artists, someone who stands alone in his output and transcends prediction.

The previous year has seen Esa take the stage in Hamburg, and we look forward to forthcoming live dates and of course the GIT Award show itself on April 4.

He is sparing when it comes to praise of the contemporary Merseyside music scene, admitting a feeling of separation, but singling out prolific pop chanteuse Claire Welles for her “bravery” in her musical vision, and psychotic surf dandies White Blacula for their performance skills. Live, Esa presents a subdued intensity, and although he has assembled bands before, we get the feeling that many other musicians would be too earth bound to do his work justice.

It is only very recently that he has embraced the online community and begun to develop a musical presence, but even this is sparse – you wont find him gleaning fans on Facebook, or RT self-aggrandising mentions on Twitter, meaning you have to work hard to engage with his work, although the results are never less than rewarding.

When it seems that many bands have their promotional campaign developed before even setting foot in the studio, with teaser films and carefully orchestrated gig events focused on label exposure, it’s a real strength of this year’s GIT nominations that Esa is here simply because of the absolute quality of his music, something which he recognises and values.

Few of you will have had the opportunity to have heard him before, but his nomination will come as a surprise to no one who has been lucky enough to have followed his staccato journey.

Ovum Caper is available on vinyl through Gagarin Records or via digital download through Esa’s own Bandcamp page.