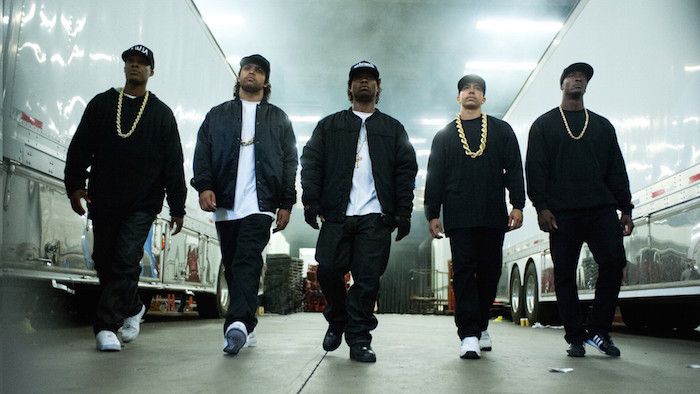 Ahead of the release of Straight Outta Compton, Getintothis’ Michael Fowler counts down the ten finest hip hop films.

A whole wave of amazing new hip hop and rap films are due to hit cinemas anytime now, including NWA biopic, Straight Outta Compton, the Forest Whitaker and Pharrell Williams produced Dope, and this Saturday’s Tribute to Gil Scott Heron at FACT with Q&A featuring Heron’s son Rumal Rackley, hosted by Malik Al Nasir of Malik and the OG’s fame.

Before these unmissable films take the summer by storm we take a look at the top 10 films that every hip hop fan, who knows more than just how to generate a Straight Outta Somewhere meme, needs to see.

When we heard there was a film being made about Biggie, we couldn’t have been more excited. Though when it finally came out, we were a little let down. The film was never that entertaining and didn’t really focus on much outside of the introduction of these famous characters, and the initial excitement of spotting the people playing Puffy, Pac or Faith Evans never really grew, but if we left out the biopic of the world’s greatest rapper from a list of top 10 films that every hip hop fan needs to see, we’d be a fool.

Starring Chris Rock, CB4 is a send up of the gangsta rap genre. It follows a group of young rappers who have no marketable image, so they steal a locked up crime kingpin’s identity. Rock begins looking the spit of Eazy-E and they start to see some success with tracks such as NWA spoof Straight Outta Locash.

The film isn’t good by any means, in fact most of the songs aren’t even that funny because they are so tightly knit to the originals it doesn’t even feel like satire, but there are plenty of highlights. Tracks like, Cause I’m Black Y’all, a Public Enemy parody in which the rapper repeats “Cause I’m black y’all, I’m black y’all, I’m blacker than black I’m so black y’all” for the whole song and also Phil Hartman’s character makes it enjoyable enough. The Simpsons voice actor plays an over the top conservative politician who is out to put a stop to the group. “Any person who would defile America’s pastime by wearing a baseball cap backwards… well, that’s an evil that speaks for itself!”

Back in 2005, Terrence Howard, who is currently starring and getting positive reviews for his performance in new hip hop TV show, Empire, starred in Hustle & Flow as a pimp and drug dealer trying to make it big in the rap game. Howard’s performance is strong and sincere, and his character is much more complex than characters we usually see in hip hop films, for example the weak and two dimensional acting of 50 Cent in Get Rich or Die Tryin’, which Howard also starred in that year.

Though technically a film about reggae and Jamaica, Reincarnated is as much a film about escaping hip hop as it is about embracing a new style of musical culture. The film follows Snoop Dogg’s transformation into Snoop Lion, surrounding himself into Jamaican culture, which to him is mostly smoking a shit tonne of weed, while trying to find peace, love and spirituality in his music.

Though his insight into Jamaican culture and music doesn’t tread too deep, he opens up about his time on Death Row Records, the peace talks he held after his friends and contemporaries were killed and also the murder accusation he faced at the beginning of his career.

After the success of his 1998 film Kurt & Courtney, which explored the conspiracies surrounding Kurt Cobain’s death that seemingly put Courtney Love to blame, Nick Broomfield came back to musical-murder-mystery with his film Biggie and Tupac.

Broomfield has been criticised for not gaining any footage to balance out the film’s heavy handed theory that Suge Knight was the coordinator of Biggie’s murder, but what he produces from his interviewers is an insightful look into the feud between East Coast and West Coast hip hop and an interesting biographical portrait of both rappers. You even get to hear from the sweet old ladies that are Biggie and Tupac’s mums.

Based on the early story of Def Jam Recordings, Krush Groove does not always hit the right mark, but its undeniably cool. Steeped in 80s culture and clothing, the film has not aged well, but if you’re after some fashion ideas there’s plenty to take away. The film follows Russell Walker, a thinly veiled characterisation of Russell Simmons (Co-founder of Def Jam, and also producer of the film), after he has recently signed many of the 80s top stars. In many cases the film’s real life characters appear as themselves, including Run-DMC, Beastie Boys, LL Cool J and legendary producer, Rick Rubin.

In one of Kanye’s boldest moves he directed a film to coincide with the release of his masterpiece, My Beautiful Dark Twisted Fantasy. Kanye’s acting in Runaway is hammy as hell, and I wouldn’t expect to see him starring in many more films, but the film itself an astonishing audio visual feast. From the 30 foot tall Michael Jackson bust, full marching band and fireworks sequence in just one scene, to the simplicity and beauty of a dozen or so ballerinas performing an interpretive dance is gripping. Though not a perfect film, if you appreciate Ye’s brilliance, you’ll love it.

Widely considered to be the first film to introduce underground hip hop to a wider audience, Wild Style brought early street MCs, breakdancers and graffiti artists into popular culture. The film was made with real people, not actors, so it stars renowned graffiti artist Lee Quinones and features the likes of Grandmaster Flash. If you have any love for hip hop, this is a film of great importance to you.

2. Fight For Your Right Revisited

As a celebration of 25 years since the release of the (You Gotta) Fight For Your Right (To Party!) music video, Beastie Boy MCA wrote and directed this short and surreal film about the aftermath of the party featured in the original music video.

Starring Seth Rogen, Elijah Wood and Danny McBride as Mike D, Ad-Rock and MCA, it follows the young Beastie Boys as they rob liquor stores, drop acid and have a dance off with older DeLorean driving, time travelling versions of themselves played by Will Ferrell, John C. Reilly and Jack Black. It’s the trippiest, funniest film on this list.

Keen Slim Shady fans will remember his break out acting cameo in The Wash, which starred Dre and Snoop as down on their luck car washers. Em played a psychopathic prank calling ex-employee, a character that didn’t seem like too much of stretch from some of the skits we heard in the Marshall Mathers LP, but the film we’ll remember him for is most certainly, 8 Mile.

In a life-reflecting-art-story Eminem played the brooding Rabbit, a blue collar guy from a poor background in Detroit who also has a skill for rap but little confidence in himself. Though there were many doubters, Eminem is a world class actor and he blew critics away, along with performances from a brilliant supporting cast made up of Kim Basinger, Brittany Murphy and Michael Shannon.

Gil Scott-Heron tribute is on Saturday August 22 at 18.30 at FACT. Straight Outta Compton is released on the September 28 and Dope is out on September 4.