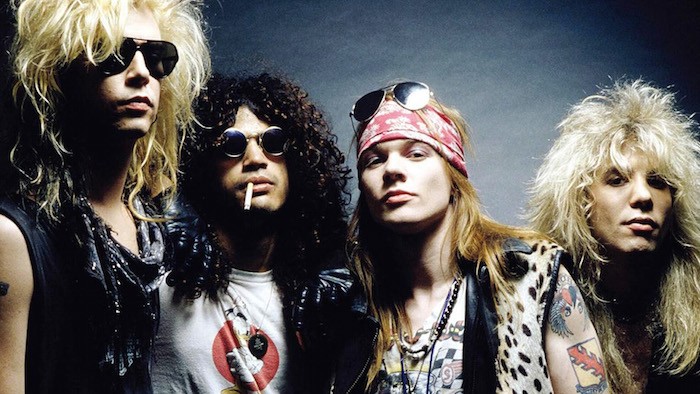 As Guns N Roses announce their return with a headline slot at Coachella, Getintothis’ Joseph Viney ponders whether the reunion is destined for success or failure.

Farmers worldwide would do well to check their pigs for wings as it appears we live in interesting times.

After two decades of acrimony, legal brouhaha, confusion, silence and all the rest, Axl Rose and Slash have hidden the lies of their civil war and will take to the stage under the Guns N’ Roses moniker for the first time since July 1993.

In typical Guns fashion, it took 48 hours after the group were confirmed for two dates at April’s Coachella festival for an official press release to state that yes indeed, the band were back together. Well, sort of…

Axl – at times the living embodiment of ‘small man syndrome’ – and Slash are joined by founding bassist and talisman Duff McKagan for a get together that has the distinction of feeling both welcome and a little too late.

Since Slash’s departure in October 1996, he and Axl spent an unwarranted amount of time dancing around each other like neighbours feuding over trees growing into one another’s yard; on-stage berating, catty remarks in the press and unexpected late night visits like something from the Adele songbook.

Duff’s decision to quit the following August left Axl as the sole original member of Guns and able to embark on the long and winding template of exasperation that eventually became 2008’s Chinese Democracy. Duff remained a little friendlier with his former singer, most recently joining the band for a few songs in 2010 at London’s O2 Arena. Having also played with Slash – and the late Scott Weiland – in Velvet Revolver, it’s easy to cast Duff in the role of torn child in Axl and Slash’s tempestuous adult divorce.

Given the band’s lengthy list of former personnel – the Chinese Democracy booklet alone is Joycean in its approach – the terms “reunion” and “reformation” are a little elasticated. There doesn’t seem to be any room for fellow founders Izzy Stradlin (guitar) or Steven Adler (drums), nor their respective replacements, Gilby Clarke and Matt Sorum.

Instead, the faces that will – hopefully – look out upon the Coachella crowd will be a tombola stand of players from past to present. Dizzy Reed (keys/piano), Richard Fortus (guitar), Frank Ferrer (drums) and Chris Pittman (once credited with “sub-bass”) should be making the long trip into the desert, potentially joined by former Velvet Revolver guitarist Dave Kushner.

Oh, isn’t it all just so lovingly incestuous?

Guns N’ Roses aren’t the byword for cool in 2016 – nor for many years before this one – but there must be something in the water as the clamour for Axl and Slash to bury this most famous of hatchets has rarely receded.

It’s easy to see where this change of heart may have surfaced from. Billboard reports that a rumoured accompanying 25-date US stadium tour could yield an incredible $3m per show. Sales of debut album Appetite For Destruction will bump and even though a Greatest Hits package came out in 2004, don’t expect the Ailing Music Industry to miss a golden opportunity to slap another one together.

Ostensibly it’s the fans that have suffered the most in the interim. Cancellations, setbacks, late arrivals and communication between band, management, labels and fans that has much in common with North Korea and the rest of the world blighted the intervening years. The well-documented history of Chinese Democracy was a trying time for many, but a large swell of support remains for Axl and Guns N’ Roses, particularly online where the communities did more to keep the name alive than the band themselves.

Guns N Roses certainly know how to end an album. What’s their secret?

“Am I excited? Fuck yeah!” says long-time fan Jon. “…but I’m not expecting anything at the moment. What I’m hoping for is that this leads to new music and a record, or more. I wouldn’t want this to just be a few shows for a trip down memory lane.”

Memory lane might just be a likely destination. After all, with so much money riding on a ‘good’ outcome – another elastic term here – it could well be a case of shut up and play the hits. The band’s last live shows took the form of a 2014 Vegas residency. That’s already dangerous territory.

Some will argue there’s nothing wrong with jumping on the nostalgia train. Even the hard-to-impress types that tend to wash up at Coachella will want the songs and moves they know. Others just want the classic experience at any cost.

“Axl still has that vocal range, the lyrics are still incredible and Slash’s guitar riffs are the stuff of legend,” says Jo-Anne Reynold, CEO of SpikeBee. “…plus that top hat with the long curly hair and the cigarette just barely poking out from underneath; what a stud!

“It was the 80s, the long hair ‘I don’t give a fuck attitude’ and the raw energy that the entire band brought to the album you could actually feel it.”

“Why now? Because Axl ran out options,” says Lars G, another fan. “I’m happy for Axl and Slash on a personal level. I hope there is more between them, though, than the money on this tour. That they will inspire each other and force each other to strive for new heights. Otherwise it will blow up.”

…and why not go for it? Despite a relatively small output there are gems seldom played live that could do with dusting off…Slash and Duff playing the ‘new’ songs…it could even go – whisper it – really well.

You sense all on stage would have a point to prove, none more so than the perennially combustible singer. No matter how cool and detached you play it, years of being called fat and a lot more besides will drive you to the edge eventually. Mike Patton has always regarded all before him with the biggest of sneers, but to take a shit in Axl’s orange juice – as he did in 1991 – shows a deeper (funnier) sense of loathing.

Axl is somebody who could “walk through a corn field in Iowa and attract a crowd” according to former bassist Tommy Stinson. Such inherent charisma goes some way to explaining why – 23 years on – a great deal of people are excited about Axl, Slash and the man Matt Groening named Homer Simpson’s favourite beer after setting up once more. Just don’t expect too much from Axl though, whose only personal response until January 5 had been a wry tweet about Taco Bell.

Always an underrated lyricist, Axl once unknowingly foretold of his own destiny. “Once there was this rock n’ roll band rolling through the streets…” he intones on Pretty Tied Up (The Perils of Rock N’ Roll Decadence) . “…time went by and it became a joke.” It might be the time to write a new line.