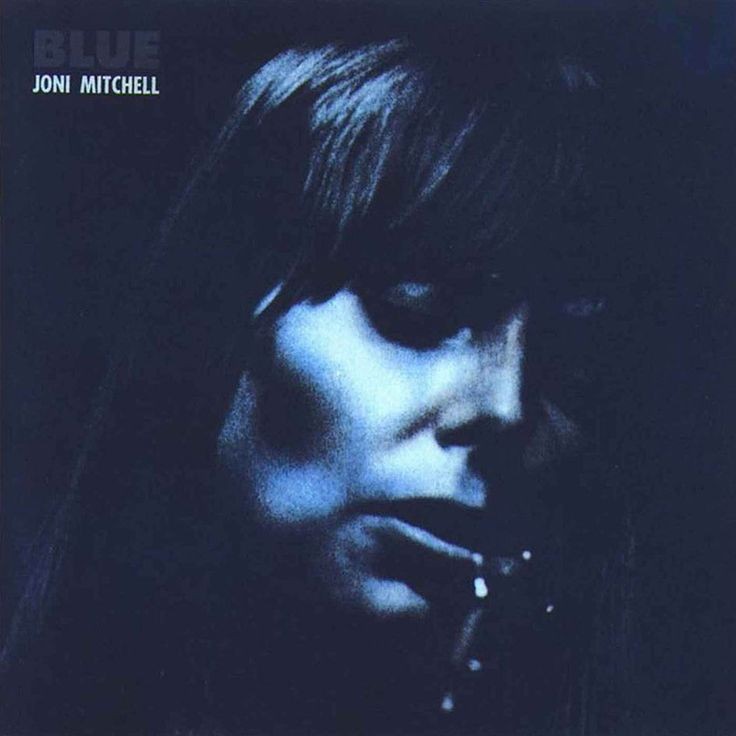 With the release of her fourth album, Joni Mitchell was no longer a folk artist. She left any bracketing or categorisation behind her in 1971, not just because of the musical content of Blue, but by its huge, genre-defying success. It was a turning point in pop music, and turned Mitchell into a pop star.

Joni‘s career is littered with great albums, outstanding tracks and hidden gems, but even her most ardent of fans would struggle to argue the case that any one of her records comes so consistently close to Blue. It is that rare occurrence of a performer’s most well-known album also being their foremost artistic achievement. The reasons behind this centre upon a fortuitous convergence of events, the chief amongst them being that Mitchell was at the top of her creative field in the early ’70s. Having developed a critical mass of songwriting skills, Mitchell deployed these with alacrity on Blue, and the effect was plain to hear. Both record and performer sounded confident and effortless, delivering a commercial, career and creative zenith.

Mitchell once commented that Blue laid her at her most emotionally bare; “I felt like a cellophane wrapper on a pack of cigarettes” she has said about her vocal performance. A disarming statement; what could be more disposable? And yet her voice is the most stringent weapon on Blue, the strongest instrument, no matter how outstanding Joni’s unorthodox guitar playing is here.

The point Mitchell was trying to make is far less heartbreaking than the language she chose to describe it in. She simply meant that Blue is her most earnest album, least populated by characters, least dressed up in metaphor.

Her other career highlights have their guards much further up, such as follow-up For The Roses, which began in earnest Mitchell‘s socio-political concerns. Preceding album Ladies of the Canyon, from its title upward concerns itself with generalities – communities (Morning Morgantown), movements (Woodstock) and particularly disassociated characters (For Free, The Arrangement) – at odds with Blue, which gives us access to Joni‘s inner sanctum, her innermost, unguarded thoughts. It feels almost unbearably personal, like reading somebody’s diary; like any diary, sometimes it’s serious, sometimes it’s skittish.

If that makes it sound teenage, or high school, or fist-chewingly cringeworthy however, it’s not. Far from it. Mitchell’s command of her lyrics, particularly of the rhythm and meter of her words make this possible. There is a rare poeticism to her lyrics, far more so than – whisper it – Dylan has ever approached. There is barely a misplaced syllable anywhere, instead a sense that Mitchell is really bending language to her will. Less as if she has found words that rhyme and strung them together at line-ends in a competent manner, but more like she is saying exactly what she wished to say and nothing more.

If Blue sometimes sounds like a beat-style travel journal (particularly California‘s globe-trotting, Mediterranean-sounding tale), that’s because it is. But its most diaristic entry is certainly closing track The Last Time I Saw Richard, skipping over tenses and perspectives, relating dialogue whilst delivering its thoughtful musings. Vocally Mitchell sounds as if she is doodling in a notebook by the end, daydreaming as she somersaults through octaves and sings of emerging from a “dark cocoon” with “gorgeous wings” on which she will “fly away”.

At times Blue is playful, at times sodden with heartache and gravity. Carey is sheer pop; rich, cheerful and mischievous, the title track is swooping and stately. Take breezy opener All I Want, in which Mitchell confesses she wants “to knit you a sweater, wanna write you a love letter, want to make you feel better” atop a trebly dulcimer track, its washing drone underpinned by little acoustic guitar runs and double bass hooks. But all the giddiness is tempered with pragmatism, an acceptance that no love story is perfect, “Do you see how you hurt me, baby? Then I hurt you too, and we both get so blue,” she sighs later on.

Then there’s the ballad of doomed love that is A Case of You. The song begins, don’t forget, “Just before our love got lost”, before the narrator is clearly unimpressed at their lover’s proclamation that they are “as constant as the Northern Star”. “Constantly in the darkness? Where’s that at,” the narrator scoffs, “If you want me I’ll be in the bar”. At any rate, is it a good thing to drink a case of anything? Maybe the telling suit of the metaphor is that it’s too sickly sweet.

Whether it’s her Appalachian dulcimer, her billowing piano chords, her beautifully played guitar or the moment where This Flight Tonight segues into a half-heard country radio hit, Blue‘s textures are what makes it so simultaneously immediately appealing and also nuanced. In Mitchell‘s use of open tunings, she drags melodies around fretboards in slides and whooshes, ensuring that nothing sounds like regimented chord patterns.

Guitar chords in a set key clearly sound too formulaic, too ‘correct’ for Mitchell, and the same could be said for her lyrics. Too many lyricists labour hard under their own lines, putting awkward stresses on words or syllables to somehow shoehorn them into a song. Joni writes and thinks poetically, in the way in which she makes rhyme schemes and syntax work for her. This progressive poeticism has characterised her lyrics throughout her career, but nowhere more evident than on Blue.

How contemporary audiences failed to interpret the subtext of Little Green is incredible listening now. Mitchell pours her heart out here concerning a daughter she felt compelled to give up for adoption in a lyric so straightforward that it sailed over the heads of critics and fans alike at the time. “So you sign all the papers in the family name, you’re sad and you’re sorry, but you’re not ashamed” she sings defiantly in falsetto, the song’s colourful, natural semantic fields sounding like a spring thaw. 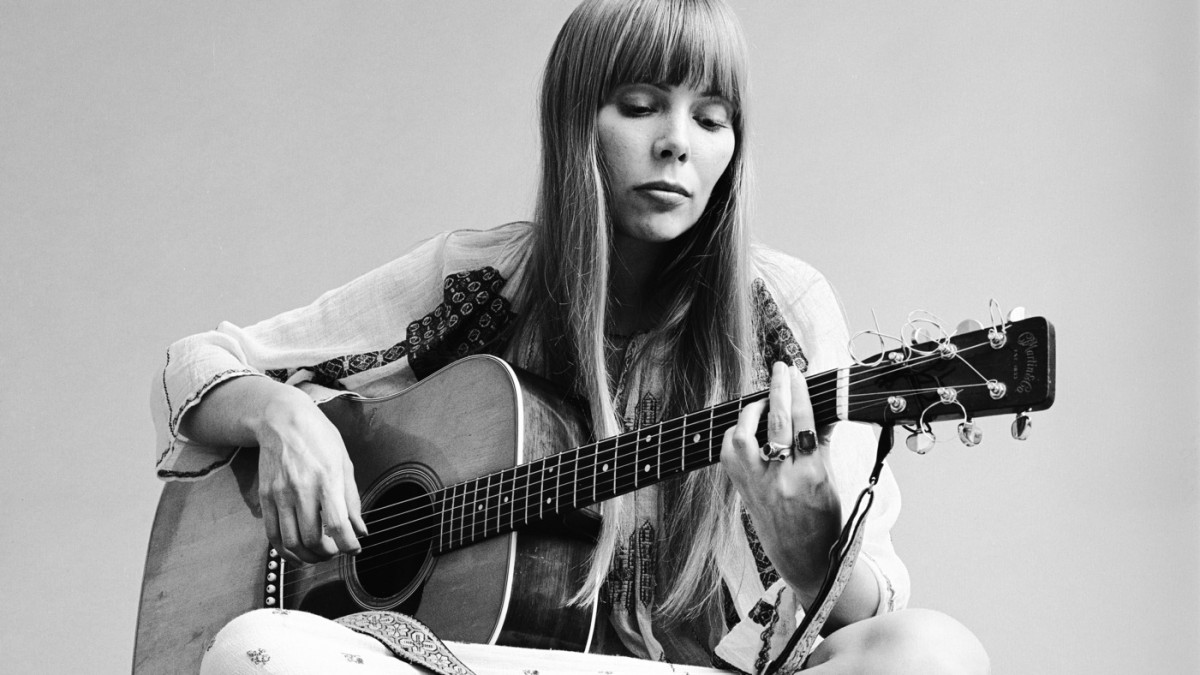 Mitchell‘s lyrics follow her guitar chords in feeling customised; she writes her own rules. If you can’t fit into the prevailing dictat, Joni has always seemed to say, then make your own. Early career she faced in the folk community with an implied ‘ownership’ of songs that performers had not themselves written, signature songs that only one person could perform. “You can’t play that here,” Joni was told time and again, at venue after venue, and baulked at such stricture. Mitchell has never been one for convention. In terms of her career of course, and in terms of songwriting, as evidenced in Blue‘s arrangements, structures and chord progressions. She plays and tinkers with her formulae ceaselessly, on This Flight Tonight‘s vertigo-inducing upward chord slides in the chorus offset against the washy verses and that delicious country-radio segue.

There are no characters in Blue as in the rest of Joni’s oeuvre; it is a work of non-fiction, of autobiography. When she sings on A Case of You, “I am a lonely painter, I live in a box of paints,” it’s transparently about her own life; she had even created her own cover art up to this point. A Case of You is disarming, bare, confessional; her voice shooting upwards in pitch with near-wild abandon. Joni throws her vocal around like a finely-tuned instrument, almost operatically at times such as on this track. Or on River, when she delivers the line, “I would teach my feet to fly,” and absolutely soars. Her voice is molten glass, oozing and rushing into every crevice of the record.

Her open-tuned guitar chords may be most famous, her stringed multi-instrumentation may have been most pivotal in broadening Blue’s palette, but Mitchell’s unsung hero has always been her piano playing. She makes the instrument ‘talk’ in a similar way she coaxed her guitar into doing, in a similar way that her percussive dulcimer playing brings an extra layer to A Case of You or Carey. Her chords bloom organically, notes tumbling over each other like dozens of tiny braking waves on the extended, jazz-inflected intro of The Last Time I Saw Richard.

Aspects of Blue are simpler than what Joni had done before, paired down, or at least their development arrested, and studio trappings becoming no more distractory. The reason why it is her most well-known album is it is also one of her most direct. Vocals are rarely double-tracked, as if Joni is singing directly to the listener, and the connection this creates is profound.

All great art speaks to its audience on a visceral as well as a cerebral level, making them feel something just by virtue of its exposition.

It is a heart-on-sleeve album, emotionally bare and raw, but always retaining its control, its dignity. You can’t trade the emotion out of Blue, you can’t look at it impartially and unemotionally; it is made of emotion.