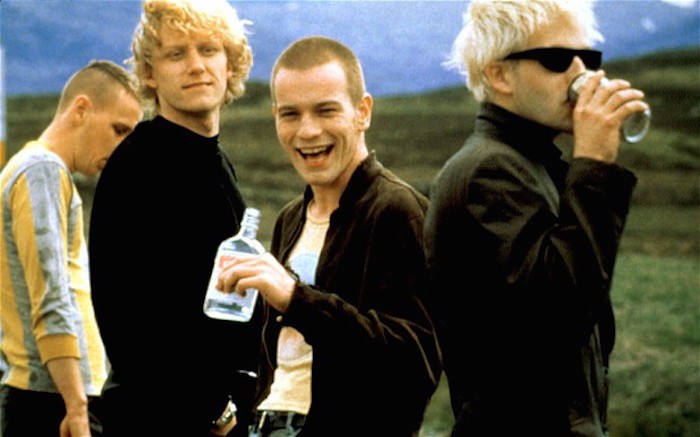 On the 20th anniversary of cult classic Trainspotting, Getintothis’ Paul Evangelista looks back at one of Britain’s most successful films.

“Choose life. Choose a job. Choose a career. Choose a family. Choose a fucking big television. … Choose DIY and wondering who the fuck you are on a Sunday morning… But why would I want to do a thing like that?“. From its first lines, Trainspotting set itself against cosy normality.  With these opening scenes, delivered over Iggy Pop’s Lust for Life played loud and proud in the mix, the film starts as it means to go on – loud, brash, rebellious and provocative.

Since Trainspotting’s release 20 years ago it has become something of a cultural phenomenon.   A very quotable film, some lines such as the above are as familiar as a song from our youth and it is a culturally bereft soul who can hear Underworld’s Born Slippy without thinking of Ewan McGregor’s Renton disappearing down a toilet or another of Trainspotting’s many iconic scenes.  But its place in the 90s zeitgeist was far from assured when the film was being made.

Produced on a tiny budget of £1.5m and focussing on addiction and overdoses, and with many scatological or disturbing scenes, success on the scale it enjoyed must have seemed extremely unlikely.  However, there is a joy in Trainspotting and its characters that leaps off the screen.  Ewan McGregor particularly has great charisma and an infectious smile that makes you root for him throughout the film, despite his obvious failings and shortcomings.  Criticised by many as a film that glorifies drugs, it instead glorifies youth.  Not always the best aspects of youth admittedly but (Robert Carlyle’s Begbie aside) the characters have an innocence and charm about them that it is difficult to dislike.  Addicts have a history of being portrayed in films in an unsympathetic way, but Renton was the junkie we all loved and wanted to win, against the authorities, his surroundings and his friends.

One of the film’s major strengths is the way it uses music to help bring scenes alive and it has become synonymous with its soundtrack. Songs are often not faded into the background to enhance emotion, but are loud, upfront and key to the film’s identity; Trainspotting would not be the same film without its excellent soundtrack.  By way of return, Born Slippy provided Underworld’s highest chart position when it went to number 2 following its use in the films closing sequence.  Iggy Pop’s Lust for Life also entered that charts following the exposure that Trainspotting afforded it.  Indeed, Iggy references abound in the film, with a Raw Power poster on the wall of Tommy’s flat and a couple of mentions of an Iggy gig, Trainspotting aligning itself with what we can loosely call the alternative side of music and life.

The timing of the film and some of the music it used meant that it surfed the crest of the Britpop wave, including songs from Blur, Pulp and Sleeper.  Luckily, this was before Britpop became the generic, corporate mess it fell into, with the film being released just days after Jarvis Cocker punctured Michael Jackson’s ego with his bum waggling stage invasion at the BRITS and when Oasis were top of both the album and singles charts.

The posters for the film seemed to tie in with this, with black and white shots of its main stars, looking more like a band or an album cover than a film cast.  Being released at a time when British cool was at one of its many peaks gave the film extra edge and cultural impetus, meaning the film’s distributors were now so convinced of its potential that they spent £800,000 on marketing, more than half the film’s original budget, meaning that hype for Trainspotting was enormous.  Not that this would have mattered if the film failed to live up to the hype, but Trainspotting was all that it should have been and more.

Making over £10m in Britain, Trainspotting swaggered like a Britpop frontman, updating its posters to proclaim “Hollywood come in…your time is up”, a line taken from Empire magazine’s review of the film.  It has become the second most successful British film of all time, beaten only by Four Weddings and a Funeral and was voted the 10th best film of all time in a recent Time Out survey.  It also fared very well abroad, despite its American distributors wondering whether it would need English subtitles so their viewers could penetrate the Scottish accents and dialect.

As far as the claims of Trainspotting glamourising heroin are concerned, there can surely be no more hellish a scene than that of Renton’s hallucinations of a dead baby crawling across a ceiling during one of his attempts at cold turkey.  We all want him to recover from his addiction, but all attempts seem doomed to failure, as much because of his surroundings than any issues of his own weak will.

Love cinema? Have a browse through our Film section

One attempt at cleaning up is followed just minutes of film later by a baby dying, a friend going to jail and Renton himself being obliquely lectured on the perils of HIV by, of all people, Dale Winton.  The obvious message is that addiction is a horrible, squalid thing to fall into and once there, getting out and getting clean is possibly an out of reach goal.  Of the film’s highs and lows, its journeys from euphoria to joyless squalor and horror, it is the unsettling scenes that tend to stay longer in the memory and that have come to define the film.  The triumph of Trainspotting is to turn all this into a brilliant entertainment.

However, as the film left the ranks of cult hit and crossed over to mass acclaim, something of its message may have been lost.  As always seems to be the case when something edgy goes mainstream, some of its nuances are overlooked in favour of the more obvious aspects.  Trainspotting began to be seen as an endorsement of a lifestyle, perhaps even something aspirational.

In much the same way that the track perhaps most synonymous with Trainspotting, Underworld’s Born Slippy, also got misconstrued by beery masses shouting “Lager lager lager” after a skinful in town centres the length and breadth of the land.  Karl Hyde’s intentions when writing the song were far from glorifying drinking, later stating “The first time we played it live, people raised their lager cans and I was horrified because I was still deep into alcoholism. It was never meant to be a drinking anthem; it was a cry for help”, adding “The film redressed the balance, gave the song resonance.”

With news that a sequel is being made for a likely 2017 release, we will all finally be able to see what has happened to Trainspotting’s anti-heroes, but I think we can guess that happy endings are not likely.  A sequel has a lot to live up to now that any follow ups will not have the same element of surprise or sense of perfect timing that the original had, but we hope that Irvine Welsh and Danny Boyle can again make us root for the underdogs and make us laugh and cry for our friends on the screen.