With LIMF celebrating Liverpool’s punk culture with their 76-16: From Eric’s to Evol commission this summer, Getintothis’ Banjo revisits the club that started it all.

Punk has become many things in the 40 years since it went overground.

It has become acceptable, stripped by time and familiarity of the ability to shock.  It has become common place – punk fashion and influence can be seen pretty much everywhere.  It has become an exercise in nostalgia; punk bands still play gigs to the same crowds who saw them decades ago, cosy gigs reliving a collective youth.

And it has become commodified, a trend that in truth started worryingly early.  These days, Ramones and Joy Division t-shirts can be snapped up in Primark, extravagantly dyed hair, ripped jeans and multiple earrings are mainstream and raise not a single eyebrow.

But it was not always like this.  Oh no – once upon a time,Punk was a dangerous, exciting thing to be involved with. Questions were asked about it in the Houses of Parliament and just looking like a punk could get you chased, beaten and worse. In those far off days, this shocking new phenomenon was news!  Music papers particularly couldn’t get enough of it, devoting almost whole issues to its rise. But, John Peel aside, it was almost impossible for young teens to actually hear the music itself. Thank God then for Roger Eagle being, not for the first time in his life, in the right place at the right time. And, more importantly, with the right attitude.

Following on from creating successful and influential nights at the Twisted Wheel in Manchester and the Stadium in Liverpool, Roger, along with Pete Fulwell and Ken Testi, opened Eric’s in 1976, just in time for punk to spread out from London to Manchester and then to the provinces.

The first band to appear at Eric’s were The Stranglers, followed a week later by The Runaways and then The Sex Pistols. Eric’s had clearly tapped into a rich vein of exciting new music with punk beginning to explode. Not that it was ever a punk club per se, also featuring gigs from such diverse artists as Steve Hillage, Van der Graaf Generator, B.B. King and many reggae artists such as Prince Far I and Inner Circle. 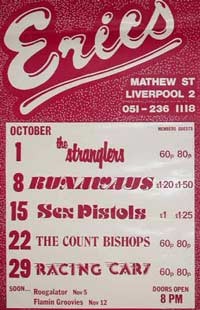 The first run of gigs at Eric’s

Roger Eagle was one of the rare breed of people who were more interested in the art of what they were doing rather than the finances, so the more popular gigs by the likes of The Clash and The Damned funded gigs by artists less likely to pull in a large number of paying guests, but Roger would rather spend time and money showcasing wonderful music for a smaller audience than have it ignored. His legendary enthusiasm for music and for turning other people on to bands he loved was undoubtedly one of Eric’s best assets.

This writer’s own calling to Eric’s came whilst still a fresh-out-of -school 16 year old, starting what would be my final summer holiday, marooned between the childish world of school and the more grown-up world of college. Towards the end of my school life, a schoolmate had moved away, only about 5 miles down the road, but enough at that age to make it difficult to maintain a friendship where seeing each other every day was normal and effort free. We have, in fact, remained friends to this day. We got into punk together that year, neither of us knowing the full seismic effect this would have on the rest of our lives.

On the second week of this summer break, this friend phoned with an invitation to join him and some others in going to a punk club in Liverpool to see Magazine play a matinee show. To my eternal regret, after hearing all the shock horror stories in the press, I bottled out and stayed at home, wracked with jealousy. When I found out the day had passed without major incident, we plans to go the following week to see Rich Kids, the band  Glen Matlock formed after leaving The Sex Pistols. So when the next Saturday came around, I pocketed my £2.50 pocket money and headed off to a brave new world.

Graffiti was quite big with punks at the time, not the arty tags or Banksy murals we see now, but crude Magic Marker scrawlings of band names and slogans. We all set pen to the train shelter while waiting for the train into town. Terrible really, and the kind of thing I hate to see these days, but it seemed to be somehow important then; part of the Destroy culture that punk embodied, a lack of respect for your elders and surroundings. We thought we had a point to prove; to go against the grain, be disruptive, sign your contempt for the world and your surroundings as boldly as you can. There was an interview with John Lydon’s wife Nora, many years later, where she recalled in 1976 being advised not to have these punks in her house, not because they would steal or break anything but because they were likely to write on her walls in paint and pen.

Arriving at Eric’s, we found we had to first become members before being allowed entry (something about it being a members only club gave it extra freedoms within the law, such as staying open late). At first this extra expense was dismaying, taking my last 50p as it did, but looking back, 50p for a year’s membership of Eric’s must be classed as something of a bargain.

I paid this and the £1.00 entry fee and went down the Eric’s staircase for the first time. Memories of this portentous event are scarce, but it was like nothing we’d seen before. Previous experiences of music played at anything above front room levels of volume had been local discos, and Eric’s was nothing like that. Dark, damp and with dirty red walls, walking down those stairs was walking into another world. Proper bands played here, proper punks came here and we were entering their world. This was a big deal, although how big a deal was not immediately apparent.

As this was a matinee gig for under 18s the bar served only soft drinks, so we bought Cokes. This was a masterstroke of Eric’s – adding a matinee show meant that bands could be booked for two shows in Liverpool and then another night at Manchester’s Factory venue which in turn, made it more financially viable for bands  to make the trip North.

Away from those practical considerations, it meant that a generation of kids, ideally aged in 1977 for the shockwaves and upheaval of punk, could be part of things in a way that otherwise would have been beyond our means, schemes and wildest dreams. It is impossible to overemphasise the impact this had on a bunch of 16 year olds from the sticks. Being a punk in a small town was to be in a small minority and made walking its streets and corridors a dangerous prospect, but Eric’s gave young outsiders a place to belong, maybe for the first time.

In return, the Eric’s owners, movers and shakers seemed genuinely fond of the young crowd and what they brought to the club.  Big in Japan dedicated their only proper release to “the Eric’s matinee crowd” and their singer, Jayne Casey, still tells the tale of when Iggy Pop played Eric’s on his birthday. The matinee crowd, myself included, burst into a spontaneous version of Happy Birthday to You in a way that a grown-up crowd would most definitely not have done. Not expecting this reaction, Iggy grinned from ear to ear, his rock star persona punctured by this young gesture. After this, Iggy shook my hand and I swore I’d never wash it again. 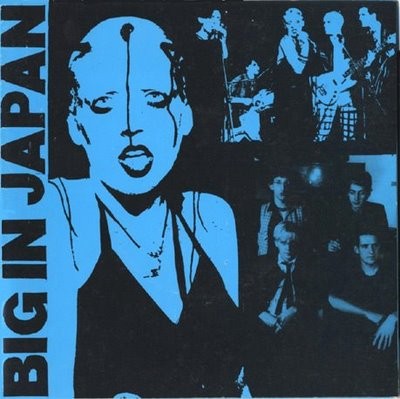 Memory is not perhaps 100% reliable here, but there were a plethora soon-to-be famous faces working on the bar or on the door.  Ian Broudie certainly used to be on the door a fair bit, and there are blurry recollections of Mac, Julian Cope and Pete Wylie’s talents being employed in some capacity or other. I seem to remember Pete Burns DJing occasionally. I always strongly suspected that he brought records down from his day job at Probe Records, played them in the club and then took them back and sold them, along with a nice crackly coating of sweat and beer.

The bar area was the first room you walked in to as you came down the stairs, with a dark seated area with the legendary Eric’s jukebox to the right and the stage area through a doorway in front. After collecting our Cokes, we took our place stage left, me marvelling at the fact that I was in a punk club for the first time in my life.

Everyone looked punkier than us, so mental notes were made to make a few changes to wardrobe in future. The long hair had already gone, chopped off a few days after hearing God Save The Queen for the first time.

After standing around for a while, the support band came on. I had no idea who they were and had never heard them before; few people had then. The lead singer walked to the mic and said, “Hello. we’re Joy Division.”

So the first live punk band we saw at Eric’s turned out to be Joy Division!  Sometimes fate just seems to treat you well. Obviously this gig was now a long time ago and we had no idea just how immense Joy Division would turn out to be, but I can clearly remember the bass lines of Transmission and She’s Lost Control and can recall them playing Ice Age and They Walked in Line.

We were instantly hooked. From now on Joy Division were our band and we saw them every time they played a matinee show, as well as gigs in Preston and Leeds. We saw them go from support band to headline act, although the first headline show I saw them play was to less than 20 people.

After they finished their set, we waited for Rich Kids to take to the stage. We were about to see a Sex Pistol and were beside ourselves with excitement. Again, time has dimmed my memory of the gig somewhat, but loud punk music (or Power Pop as the Rich Kids were briefly classed) had well and truly got us and this was without question the most exciting day of our young lives. Following the gig, the band came out of the dressing room and hung around the bar, chatting and signing autographs. At the tender age of 16, in one single afternoon we had been to a punk club, seen Joy Division and got an autograph from a Sex Pistol. How could we not fall in love with this wonderful place?!

My second trip to Eric’s was to see The Clash on their Tommy Gun tour, ably supported by The Specials, in one of the best and most overcrowded gigs we ever attended. Eric’s had delivered again and our fate had been sealed.

For the next two years or so we would be back every Saturday. I even once, through a special mixture of sulking and badgering,  forced my poor suffering parents to cut a holiday in London short so I could be back in my beloved Eric’s to watch Joy Division again.

It doesn’t happen often in life that we are lucky enough to be in the right place at the right time, but when it happened  I am eternally glad that I made the most of it and have so many memories of my time at this legendary club.