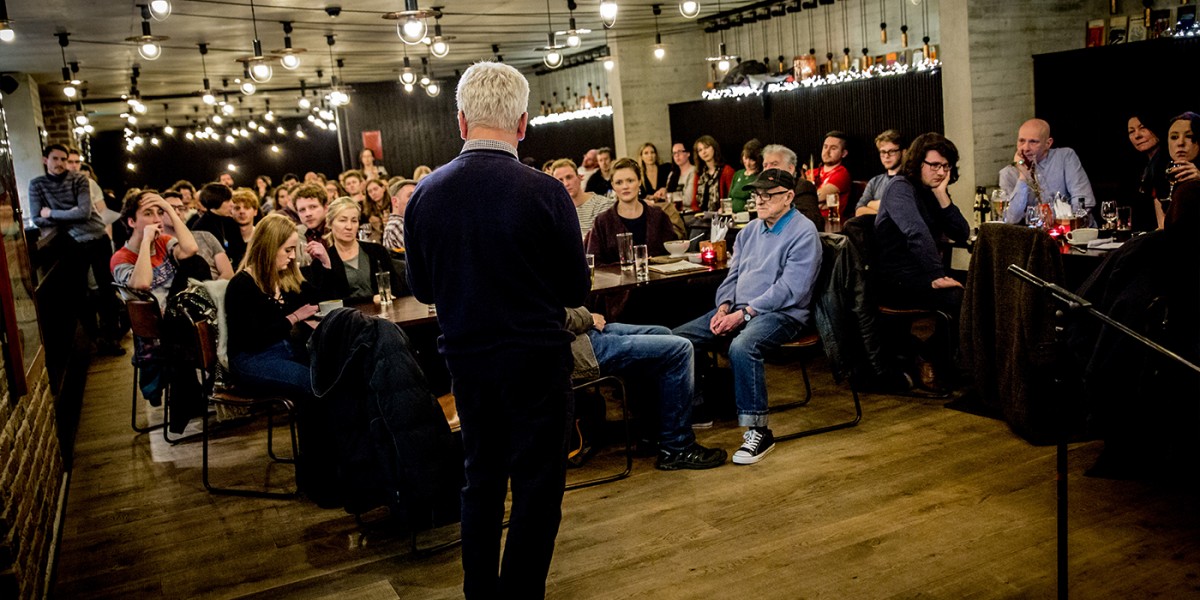 A rapt audience in the Everyman Bistro

With spoken word and poetry events becoming ever popular on Merseyside, Getintothis’ Jamie Carragher enjoys a night at A Lovely Word at the Everyman Theatre.

Poems previously confined to private notebooks are being shared throughout the city. Through the backrooms and bistros, Liverpool’s spoken word scene reverberates. But since when did public poetry get so popular? Tonight, Liverpool’s premier showcase, A Lovely Word, promises to lift the lid on the phenomenon.

Tucked away in the basement bistro of the Everyman Theatre, A Lovely Word is an open mic night that takes place every second Monday of the month. For all the plaudits that the rebuilt Everyman received – The Stirling Prize for architecture no less – there was, initially, an air of hesitancy among locals when the theatre reopened in 2013. An impressive building, sure, but where was the soul? The Everyman of Willy Russell and Roger McGough, of Julie Walters and Pete Postlethwaite was rough around the edges. Never fear: A Lovely Word is injecting the Everyman spirit back into the building.

A quick scan of the audience, illuminated by the sea of bulbs dangling from the ceiling, tells you that something special is going on. Seats are full – there must be well over a hundred here – and the audience refuses to fall into any one demographic. Out of this crowd, ten to twenty five poets will emerge. After delivering up to three poems, they’ll step away from the microphone and be swallowed back into the ranks of the audience. 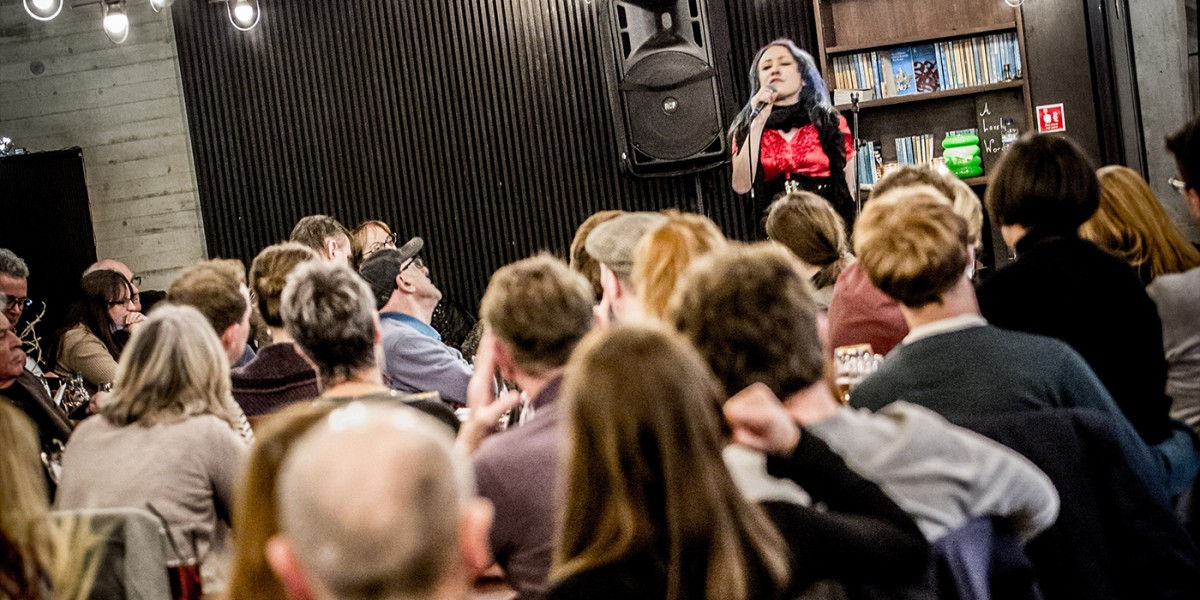 A (not so) Lovely Word

Founded in 2013 by Patrick Hughes, an Everyman Young Writer and spoken word poet, A Lovely Word was initially housed in the now-defunct Mello-Mello. As the months passed, it became clear that Mello-Mello just wasn’t big enough for the night’s ever-growing following. That’s when the Everyman stepped in. Though Hughes now splits his time between Norwich and Liverpool, the night continues to run like clockwork thanks to delightful comperes Tamsin Cook and Matthew Elliot.

Both Cook and Elliot are keen to keep the night ticking over. The worst case scenario is not getting through the sign-up sheet, resulting in a bottleneck of eager poets. Although accommodating so many performers is difficult, the power of the Liverpool poetry circuit stems from its accessibility; free entrance is the norm for listener and performer alike.  At a time when working class actors bang the drum against ‘arts for the few’, it’s right that there’s a slice of local culture open to all. Events like this and the equally well attended Liver Bards, Dead Good Poet’s Society and Rhymes and Records, to name a few, represent a community railing against the ideological thuggery of the government and their cuts against the arts.

Firm favourite and septuagenarian, Ralph Killey, is cheered to the microphone. A former Fleet Street journalist, he dips his cap and delves into his canon, kept within a plastic ring binder. Inspired by his hero, John Betjeman, Ralph is unwilling to break out of the mould of rhyming verse, exploiting the rhymes for frequent punch lines. Here’s a snapshot from The Actor:

I trained as an actor at RADA,

I had no food in the larder,

I lived on salt peanuts and beer.

I landed my first role at Christmas,

I was a pantomime horse.

I fancied the young wardrobe mistress,

She did it for buttons of course…

Ralph’s school teacher once told him that writing free-verse was ‘like playing tennis with the net down.’ Considering the prominence of confessional free verse on offer this evening, Ralph must think there’s a lot of foul play in the modern game. 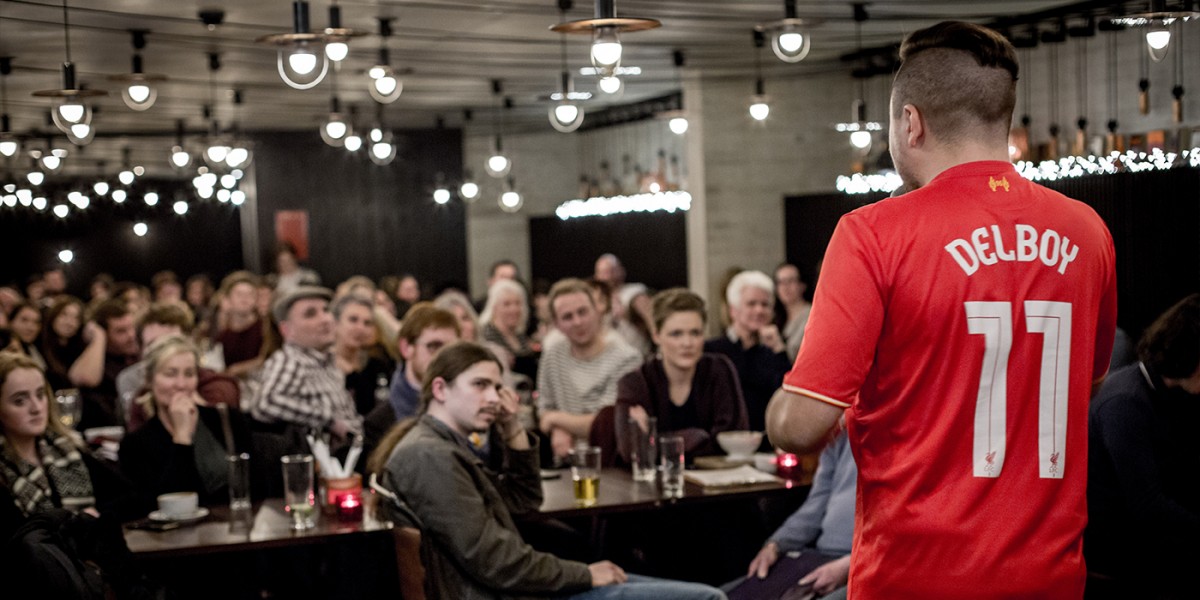 There are a number of poetic styles on display tonight, from the grave to frivolous, the real to the abstract. Most successful are those performers who use their words to take the audience by the hand, to let them in on their personal experiences. One poet who is particularly adept at doing so is Joy France. Here’s an extract from her poem, Whispers:

We were meant to grow old together, disgracefully

Fill baths with bubbles or jelly

Draw penises on sleeping staff’s heads with a sharpie.

But you went and died.

And not heroically or stoically

Making a cup of tea.

On paper, stand-up comedy nights and spoken word events are pretty similar: the performer is up there, alone, using little more than an amplification system to set the world to rights. Off paper, the differences are considerable. For all the egotism associated with stand-up comedy, the comedian constantly cares what the audience is thinking. A poet is not necessarily encumbered by the need to entertain. Strangely, poets can be more willing to create material that challenges the audience.

Tonight’s headliner, George Melling, is challenging in all the right ways. As a listener, you’ve really got to concentrate to catch what he’s saying: his staccato delivery is as sharp as a cliff edge, his Wigan lilt as soft as a gently lapping tide. But if you can keep up, it’s worth it. He veers between the comic and tragic with consummate skill, as encapsulated by his closer, Mi Granddad:

Bounced mi on ‘is knees, while ‘is Woodbine ash fell on mi ‘ead’,

The twist in the middle of the poem is devastating, all the more so because he doesn’t overplay it. Highlight of the night, Melling leaves the stage thanking the organisers and crowd profusely. He, like everybody else who performs here, recognises that crowds like this one are the foundation of spoken word’s newfound success in the area. Because crowds like this will swallow a heart-tweaker and then bellow at a funny a minute later. They’re polite without being single-minded. They don’t shout out, ‘You’re shit, mate,’ and that’s a trait to be admired in any context. A Lovely Word is fortunate to have a crowd of this size and sensibility, but then again, the poets who turn up and perform month after month have earned their devotion. That’s what community is.

Liverpool’s enthusiasm for verse aloud is in keeping with the growing national trend. London and Manchester are home to vibrant movements and spoken word artists like Kate Tempest and Holly McNish are increasingly celebrated in mainstream culture. There are local factors too. Liverpool is still basking in that Capital of Culture fallout and razzle-dazzle events like Light Night are symptomatic of the great creative work going on in smaller scales on both sides of the Mersey. However, one gets the impression that the real driving force behind A Lovely Word is the collective need for poetry. And that that need is growing. And that in these politically bleak times, where silence is consent, there are people who have something to say and there are people who want to listen. 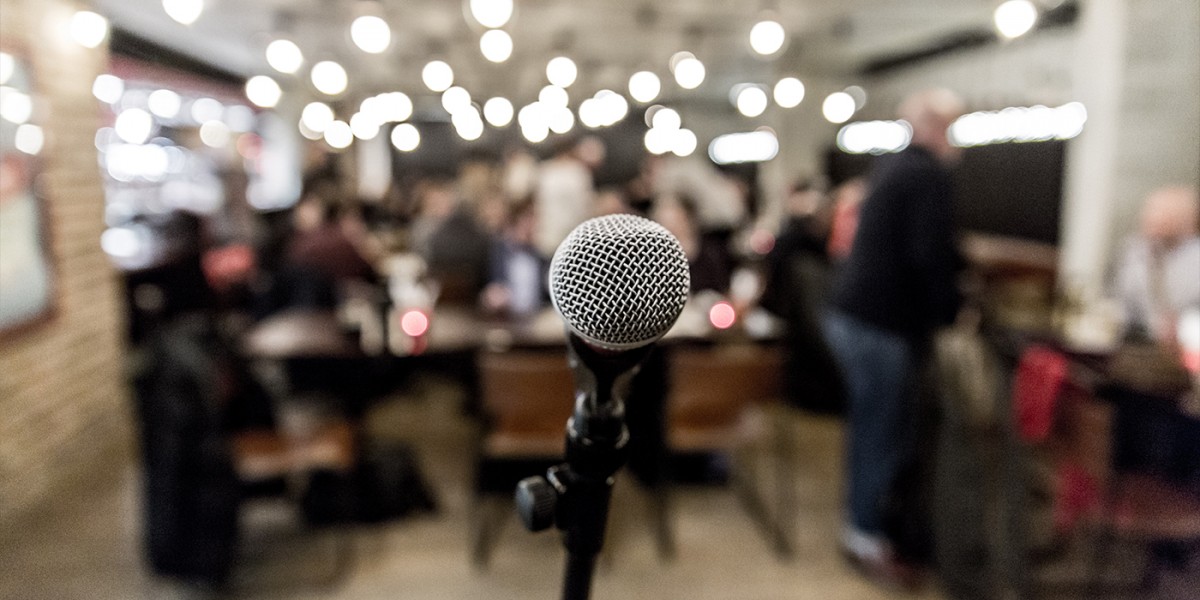 The Liver Bards – Run by the wry witted and always entertaining Steve Regan, check out the poetic event which inspired A Lovely Word’s Patrick Hughes to set up his own night. In a good way. ‘Cause he liked it so much.

Sign up on the night? Yep get there before 8 and put your name down

Rhymes and Records- Lyndsay Price set up Rhymes and Records ‘to offer something different’ for Mersey poets. Whether organising a collaboration with FACT or providing performers with a chance to have their work filmed, Rhymes and Records is certainly delivering when it comes to going that extra mile. Bridging the gap between professional and aspiring artists, this one’s a must for anyone who’s looking for a serious platform.

The Poet Tree- A new born event, Poet Tree is Matt ‘Delboy’ Delaney’s poetic baby. Early signs are good for the New Brighton based event (gasp, that’s right, the Wirral) which is making sure that the paradise peninsula isn’t poetically deprived.

Next event: @ Blackberry Grove, Last Wednesday of every month, 8:30

Sign up on the night? No- get in touch beforehand to grab a slot, next one’s full up.