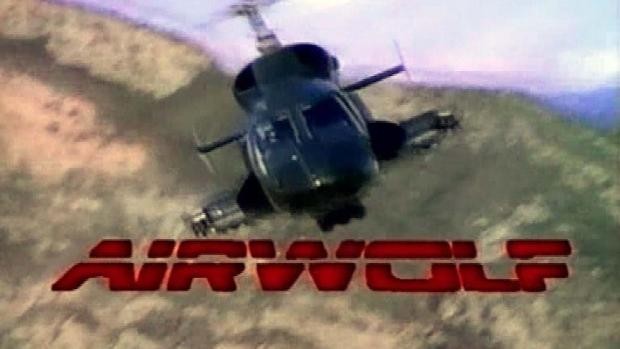 Airwolf was not only the best show on 80s TV, it also had the best theme tune, Getintothis’ Mike Stanton samples some of the homages to this coolest of cool theme tunes.

Question: What was the best TV theme tune from the 1980s?

Answer: Airwolf of course, followed closely by The Equalizer and Miami Vice.

This theme tune managed to be both epic and cheesy, quite an achievement. The air-chopping throb of rotor blades heralds the start as arpeggiated synths emerge out of the billowing dust to create a bed of sequenced menace and utter utter cool. Anthemic horns erupt over the coiling synths and swept strings like a chorus of Jericho trumpeters and you know you are in for an hour of epic air battles and tightly paced plots as Stringfellow Hawke and his crew embark on another action-packed adventure. All heady stuff.

The theme is a future-retro music fan’s dream. It perfectly encapsulates the sound of the 80s and helped inform the synthwave/vaporwave/outrun scene that has been around for the last 10 years or so. Like Jan Hammer or Harold Faltermeyer, Airwolf composer Sylvester Levay perfectly reflected the prevailing sound of the day, which seemed to consist of heavily treated and filtered guitar and liberal swathes of the synths of choice during the 80s, the Roland D-50 and Yamaha DX7. From what we can gather, Sylvester is still composing but hasn’t moved on very far since his heyday in the 80s.

Firstly, for context here’s the original in all its glory (taken from the opening titles to lend some context):

Now THAT is a theme tune! It gets us every time. It’s entrance music of the highest order and a helluva way to kick off the latest episode of the show. There are actually several different compilations of the music from the show which are a pure 80s synthwave treat. If you listen to Airwolf: Themes From Season Four (and I have), you could be forgiven for mistaking it for Mitch Murder or Miami Nights 1984.

After hearing a cover of the theme by Mitch Murder, a cover that totally owned the tune and maybe even surpassed the previous masterpiece, we searched for more versions, and holy shit, there are loads out there! All differing in quality but all Airwolf, all unmistakably Airwolf. I have given marks out of ten because it makes me feel important.

So, we did the hard work so you didn’t have to and we bet you are mighty glad we did. If you aren’t a fan of the Airwolf theme after this, you probably never will be and a small part of us feels sorry for you.

Some of us were lucky enough to be around as wide-eyed kids during the glory years of Airwolf and it has stayed with me ever since. Cover versions are a fun way of keeping the memory alive and having fun re-imagining those iconic tunes for modern times.

Who remembers the theme music for Blue Thunder?

Serving as the inspiration for South Park and Bojack Horseman, Getintothis’ Martin Summerfieldlooks at the very best of Liquid TV’s most innovative cartoons of the 90s.

Okay, we start with the best. Mitch Murder is a well established electronic/synthwave musician from Sweden and runs his own label specialising in outrun-type music called Rosso Corsa Records. This version is the quintessential version It is as faithful to the original as you can get without compromising the integrity of Levay‘s composition, yet displays the hallmarks of Mitch Murder‘s sound and musical ethos. The synths sound great and the heraldic horns have been replaced by a very pleasing glitter-synth sound that actually lends the tune a future-noir vibe – 9/10.

We love chiptune…..well we did in 2005, it has become rather tiresome over the intervening years. Once the novelty wears off there isn’t anywhere left to go and tunes entirely rendered on old game-boy consoles have faded into the background to be filed under ‘specialist’ music. However for this purpose, it is entirely appropriate. Why not have a chiptune version, it sounds great and was probably the menu loading screen for the 1986 Commodore 64 version of the game – 6/10.

At first, this appears to be all kinds of brilliant. The beats are pumped up into a 4/4 house groove, the synths are atmospheric and washed and the arpeggiator spins and loops masterfully. It’s also an hour long. However the uploader hasn’t really attempted to keep things interesting and it’s the same loop repeated for 58 minutes and 34 seconds. Maybe that’s the point. Where’s the driving trumpet lead? Where’s the variation and cool bits that made the original so good? Lazy and uninspired, barely attains novelty status – 5/10.

We had to include this metal cover for obvious reasons…it rocks and is pretty faithful to the source material. The first few seconds do resemble the opening of Vasoline by Stone Temple Pilots but once we are over that it kicks in with some serious ax work (I could totally write for Kerrang!). A joyous sleigh ride of power rock chords and chugging riffs – 7/10.

This is a bit different. It has a lo-fi IDM air to it. Some interesting sounds going on and the arrangement is well thought out. At least the uploader has re-purposed the tune without moving too far from the original. Lots of pleasing helicopter sounds are dotted throughout too, just in case we had forgotten the original purpose of the show. However, it does sound as if he has just picked out various factory pre-sets on the synth and used them. Lazy. Could try harder – 6/10.

If the James Taylor Quartet covered the Airwolf theme. A free swinging acid-jazz-funk version that is a genuine reinterpretation. You have to admire their commitment to the original. About three and a half minutes in we get a cheesy voice over which is a nice touch. Still nowhere near as good as JTQ‘s cover of Starsky & Hutch which could well be the greatest cover version of all time. Good work and a true cover of originality and cool – 8/10.

Ah yes, a trance version. Like many of the others, this retains the helicopter sounds (always a good sign). Trance beats and throbbing bass give this a cool club feel. It does degenerate into bland, mindless trance after a while but we can forgive him for that. Not bad but mainstream trance completely sucks as a genre so marks lost for that – 6/10.