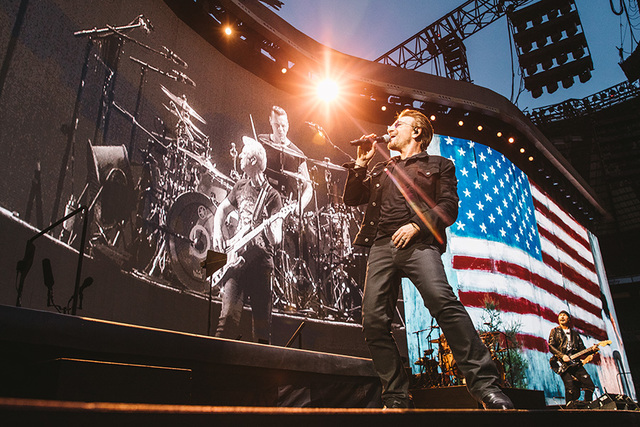 As U2 takes the Joshua Tree Tour to Twickenham, Getintothis’ John Milburn reflects on a personal journey of this and U2 tours past.

In the interests of full disclosure, I need to make you aware that what follows is not necessarily an unbiased or entirely sober review of U2’s latest tour.

I also recognise liking a band as achingly uncool as U2 has the potential to alienate many Getintothis regulars!

At 10 years of age when I had a C90 cassette with U2’s third album War on one side and the live album that succeeded it – Under A Blood Red Sky on the other. I had an Akai Walkman with headphones with bright orange sponges. I would describe U2 as the first band I obsessed about.

I used paper round wages and pocket money to fund my investment in their back catalogue on vinyl at HMV on Liverpool’s Church Street. I wasted hard earned money on several terrible quality bootlegs from the Bluecoat record fairs. I eschewed other luxuries like sweets and football stickers seeking out rare singles (A Celebration a particular favourite) and 12” extended versions of their more well known works from Penny Lane Records.

I was also an avid student of the band, learning lyrics through poring over sleeve artwork and borrowing library books to learn more about the Ireland based four piece.

From their breakthrough performance at Live-Aid via their huge commercial success and then the subsequent backlash for their movie and double live album of the same name, Rattle & Hum these were my school years and U2 was the name I scrawled on exercise books and my holdall. Before my purple epiphany in 88’ U2 were on heavy rotation on my midi system almost to the exclusion of all others.

I have seen the band on each of their tours since the early 90s and in many cases took in the same show multiple times, often in different venues and even different countries. I did however only experience the original Joshua Tree tour on TV specials such as Island Record’s 25th anniversary celebrations on Channel 4! I was 13 years of age so the live experience was limited to that of VHS cassettes!

So given that U2 are such a fundamental part of my formative musical tastes you would imagine a tour that celebrates the band’s commercial and many would argue artistic zenith would be right up my middle aged street?

The sell-out crowd at London’s Twickenham Stadium is far from diverse. Average age I would guess is 47 ethnically very very white and some of the worst jeans I have ever had the misfortune to witness are on show. Lots of Dutch and German guys mingle with UK fans bedecked in vintage and more recent tour merchandise. It is a humid 27 degrees in the capital and this may have accelerated the intake of liquid refreshments.

I was aware from social media of the basic format of the tour, the band start the show on a ‘b-stage’ in the middle of the stadium floor shaped like the eponymous tree. The show commences with the marching drum intro of Sunday Bloody Sunday and the band perform a chronological set of songs from that first album I owned, 1983’s War – then continuing to what is still my favourite song by the band, 1985’s The Unforgettable Fire, Bad and followed up with huge commercial hit, Pride (in the name of love).

Once this quartet of anthems have been delivered the 200ft screen (virtually the height and width of the stadium) on the main stage turns crimson and the silhouette of the famous tree that adorned Anton Corbjn’s iconic artwork emerges. The band make their way up to the stage and begin the opening strains of ‘Where the Streets Have No Name.’

Live, the song is always a high point of a U2 show – a song seemingly perfect for stadium performance. Rarely a set closer but normally in my experience something a set list builds toward.

The promise to play the album in full is not a new idea – many bands have toured their ‘classic album’ with varying degrees of success. This song appearing so early in the setlist logically makes sense as the band are playing the album in full and it open’s the 1987 master piece but viscerally it is dissatisfying.

It is potentially an apocryphal tale but one worthy of repeat that U2 asked the late Kirsty McColl to place the tracks that eventually made The Joshua Tree in order of her preference. Her selection was used as the track listing. Unsurprisingly many people would describe it as an LP top-heavy with hits.

I think all the tracks have individual merit and the album is a solid one throughout – however I think Kirsty’s assessment was pretty spot on. The album is front loaded with their biggest hits and commercial successes – I Still Haven’t Found What I’m Looking For and With Or Without You as prime examples.

This is the main issue for me – that these huge epic songs have been part of my life for the last 30 years and I have heard U2 play them live in many differing arrangements. These are usually the crescendo of the show rather than the middle order. Once Bullet the Blue Sky and the beautiful Running to Standstill are done it is relatively easy to see why the remaining songs in the album have been dropped from the set list in subsequent tours.

Even propped up by incredible visuals – the set begins to lose energy. Red Hill Mining Town – played with a Salvation Army brass band accompaniment – is a novel idea and it is a song that wasn’t played on the original tours in 1987. But that aside, it is a set short on memorable moments. This may also have to do with the aforementioned heat / liquid consumption ratio.

I can’t help feeling that if U2 had decided to play the set in reverse – and built up to the big payoff – the set would be ultimately a much more satisfying experience.

Once The Joshua Tree concludes there is a short encore break the band return with Miss Sarajevo which was the result of a collaboration with Brian Eno and Pavarotti and then some of their post- millennial releases before closing with a trio of tracks from another artistic high point the Achtung Baby album.

I went to this show expecting it to be right up my street – transporting me back to my school days and the anthems album that made me fall in love with the band.

In truth, most of the set was songs I know almost too well and I think they have been performed in more interesting ways in the recent Innocent and Experience tour. The sequencing of the set list felt like sitting down to a 7 course banquet and having dessert first.

Far from being a show for the hard-core U2 fanatic – which in spite of how difficult Bono makes it to like him and the issues I have with how ‘efficiently’ he deals with their corporation tax obligations I still consider myself to be a massive fan – in fact I am going to see this show again in a few weeks in Amsterdam.

This is effectively a greatest hits set – and there is not enough is different or new to engage the fans who have seen the band before, often with much weaker new material to support.

The band are performing tight and Bono’s vocals were hugely impressive – my expectations were lowered by some reports he had struggled in the US leg of the tour but his voice was powerful and perfectly under control tonight apart from the obligatory sanctimony between tracks.

When The Joshua Tree was toured the first time round the setlists were littered with covers, from the likes of Ben E King (Stand By Me), Dylan (Maggie’s Farm), Eddie Cochran (C’mon Everybody) and even Help by The Beatles.

I think I would have preferred to revisit some of these set lists rather than just hear the album in its original sequence. This show probably has more in it for a more casual U2 fan than me – someone who remembers their commercial success of the 1980s but did not drown themselves in it.