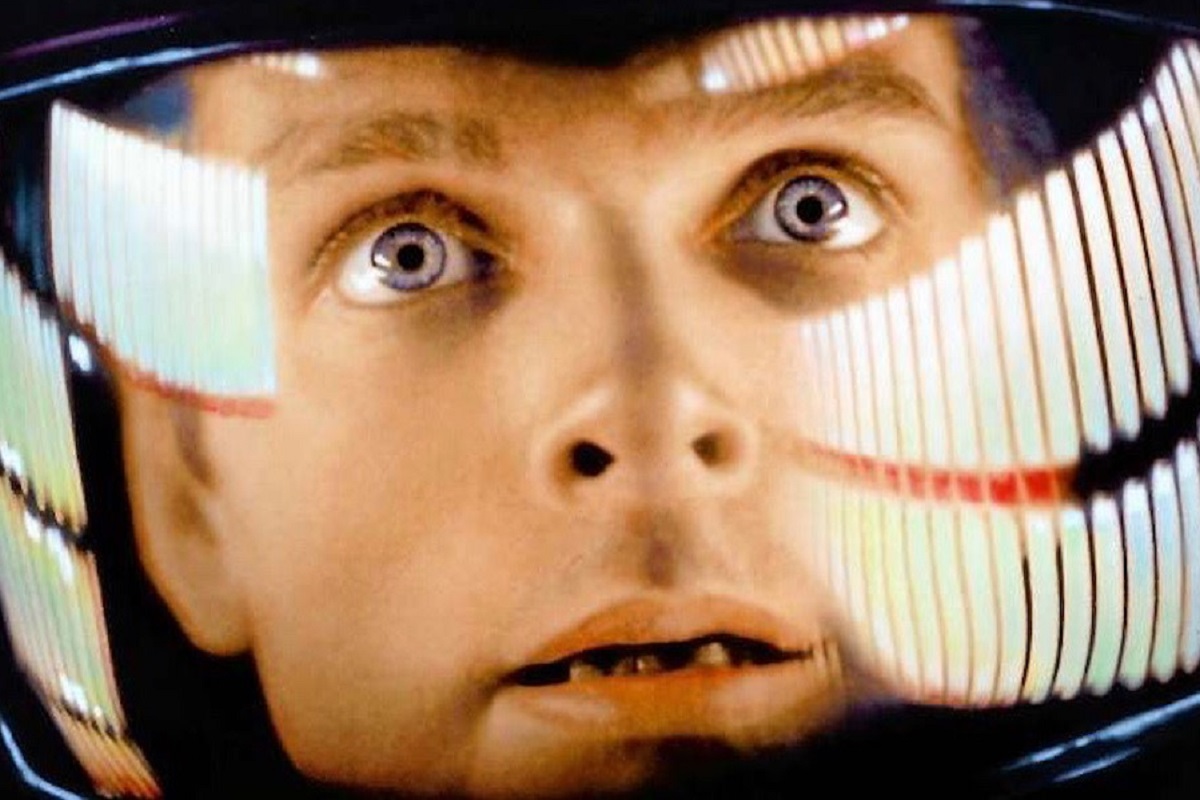 At the outset, let’s imbibe a few heady facts and anecdotes.

2001: A Space Odyssey cost $10.5 million to make but made upwards of $190 million through four theatrical releases/re-releases. Rock Hudson stormed out of the 1968 LA premiere, complaining ‘Will someone tell me what the hell this film is about?’ whilst Roger Ebert, film critic and Pulitzer winner, (who was also at that premiere) labelled it a masterpiece.

Ever the contrarian, David Thomson persists in arguing to this day that 2001 is a ‘lavish travesty’ whilst Pauline Kael asserted that Space Odyssey was ‘a monumentally unimaginative movie’. Harsh words but both pissing in the wind somewhat, given that in 2012, the Sight and Sound decennial greatest movies poll (according to film critics) placed 2001 at 6th.

Perhaps even more tellingly, the Director’s poll adjudged 2001 to be joint 2nd. Kubrick’s peers, at least, recognised that the film was something out of the ordinary.

Like few films before or since, 2001 evinces passionate comment and visceral responses. Before you consider the film itself though, look no further than the year of release in order to understand why it was such a pivotal cinematic production.

1968 was a cultural crucible in so many ways, not least in terms of cinema. In the preceding year, the ‘New Cinema’ had begun to unleash a tidal wave of counter-narrative to the Hollywood status quo. Mike Nichols’ The Graduate and Arthur Penn’s Bonnie and Clyde propelled filmmaking into a new era, garnering critical acclaim and yielding healthy box office returns.

Directors in 1968 were now empowered by this new zeitgeist of creative liberty and proceeded to deliver astounding cinematic works. Perhaps surprisingly, Stanley Kubrick, a director who had hit the big time with Spartacus (1960), pre-empted much of this startling new direction in cinematic language.

Having cut his teeth on film noir efforts like The Killing (1956) or pacifist polemics like Paths of Glory (1957), Kubrick had taken on progressively more unusual projects. From baiting the censors with Lolita (1962) through to blistering satire in Dr Strangelove (1964), he was already re-shaping cinema’s boundaries well ahead of the pack.

Thus, whilst Penn and Nichols were feverishly attempting to conceive fresh American perspectives via celluloid, Kubrick decided to turn his attention to a genre that had become prosaic and much maligned by the mid-1960s – Science Fiction.

In doing so, Kubrick was to match his peers in every element. This would be some achievement, given that Sci-Fi was often, ironically, governed by conservative conceptions of form and narrative. Moreover, it was a genre that was frequently undermined by flimsy special effects and skeletal budgets.

‘New Cinema’ would proffer contemporary snapshots (even if historically centred) with wildly new beliefs about what dramatis personae could or should do within chaotic narratives of modernity. Conversely, it appeared to some, that the stately perfectionist Kubrick was selecting the safe option.

Nothing could have been further from the truth. Over its four year gestation, 2001 was to evolve into an expression of cinema that was unique in both form and substance. Indeed, it’s worthy of note that this was the first time that Kubrick was to take so long over a film’s development, a pattern that was to repeat itself in later years. This prolonged process would nevertheless deliver a movie classic.

How then, would this be so?

Kubrick’s astute choice of collaborators would be one reason. Arthur C Clarke was one of the leading authors in the next generation of sci-fi writers. His communication with Kubrick at first was haphazard, bemused and uncertain but eventually, common ground was established. Clarke’s short story The Sentinel was selected as the basis for a script.

Of course, elaboration would occur, amidst a torrent of visionary abandon which would, in turn, lead to Clarke fleshing out The Sentinel and publishing a novel in tandem with the movie. Regardless, without this fluid dialectic between the two, 2001 would never have become the esoteric blockbuster of 1968. 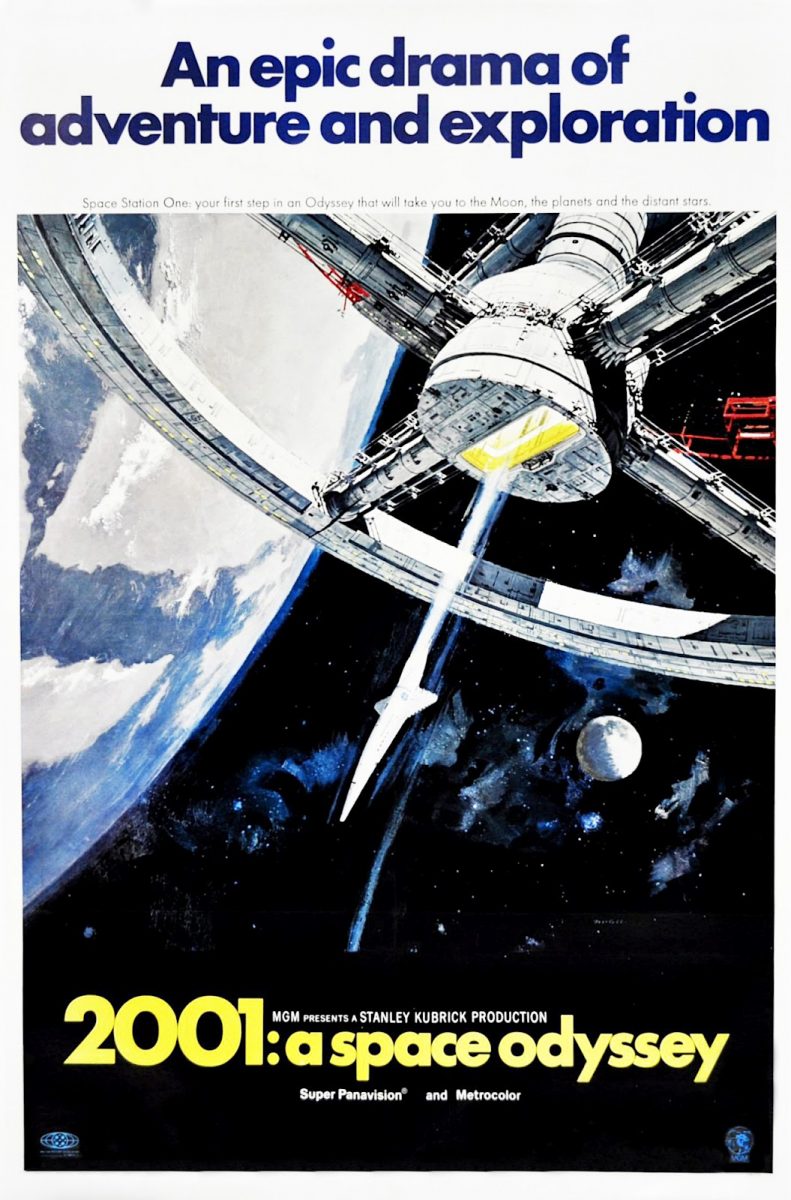 The synopsis alone was incendiary as far as traditional screenplays were concerned. The film would consist of four ‘Acts’. One would be resident in pre-history. By contrast, Two and Three would leap to a technologically advanced (but still recognisable) future of space exploration that would take on the moon and Jupiter. Four was the kicker though.

Act Four would allow the viewer to inhabit a time and place of indeterminate identity or location which would be left entirely to the judgement of the audience.

For Hollywood in ’68, this was beyond the ken of many. Yet, it didn’t stop there. The film’s diegesis  followed no moral imperative, merely observing dispassionately as early man is gifted (or burdened?) with new knowledge by a mysterious obelisk of unknown origin. The obelisk, black, impervious, menacing, would recur throughout the film as a lodestone for extra-terrestrial communication and for human enlightenment.

The ambiguous nature of the obelisk and the possibilities that it bestows on different generations of hapless humans is significant, even portentous. After all, in the midst of a Cold War dominated by atomic power and missile technology, the moral ambivalence of scientific enquiry was a salient point for debate.

We won’t delve further into a plot that loses much in the banality of written definition – suffice to say Kubrick and Clarke’s fecundity of ideas within 2001 is one its finest facets.

Before considering the technical inventiveness of 2001, it is also useful to point out that the Kubrick/Clarke screenplay contained an opening and closing tranche that lacked any meaningful dialogue. For a cinematic industry built on razor sharp wit and wordy exposition, this was courageous to the point of lunacy. The diegetic innovations implemented by Kubrick were as much about what was not said, as they were about gnomic utterances by the cast.

Still, when audiences and critics reflect on 2001, invariably they think of special effects and technical futurism which remains impressive, not least for its accuracy. Innovators like Douglas Trumbull and Wally Veevers re-wrote the rulebook on what was possible on the Silver Screen.

These effects would be tactile and authentic, functional but still fantastic, in terms of achievement and conception. One could wax lyrical about the use of giant centrifuges (built by Vickers for $750,000!) which were responsible for extraordinary revolving sets; the cavernous landscape designs at Shepperton Studios that would appear eerily realistic when the real moon landings took place in 1969; finely detailed models that would range from inches to some 55 feet; wires, cunningly masked, that would allow actors to mimic zero gravity to astonishing effect; and, perhaps most infamously, slit scan photography which would enable Kubrick to curate a psychedelic slideshow of colour and image in the ‘Star Gate’ sequence.

That said, the minutiae of the effects and the mechanics facilitating them, matter little when viewing. The impact is what really counted and it was tremendous. No audience prior to that point had seen anything quite like it. Indeed, the reality is that Trumbull’s magic retains an ability to impress which still exceeds much of modern day’s CGI.

The minimalism of both the screenplay and the sets was further complemented by Kubrick’s adept use of music. As with everything else within this film, Kubrick chose not to follow established Hollywood form.

Traditional expectations were that film scores would be utilised as cues for diegetic developments and narrative progression. They would mirror the ‘action’ and help expand the understanding of the viewers in fairly predictable ways.

Kubrick’s insertion of music was defiantly non-diegetic – in the sense that whilst it did generate mood, it did so without obvious triggers for audiences to latch on to. The grace, elegance and wonder of the music existed outside the story.

The balletic beauty of the space docking sequences was due as much to Johann Strauss’ Blue Danube as it was to Trumbull’s admirable technical prowess. Similarly, the horror of cosmic incomprehension and human inferiority when faced by the obsidian monolith is powerfully enhanced by the abstract compositions of Gyorgy Ligeti. In both circumstances, the music does not offer clumsy prods to the viewer but remains a crucial part of the cinematic whole.

This seamless synergy between music and image is revelatory. Kubrick was making a potent statement in support of a brand of cinema that rejected audio-visual constraints imposed by previous generations of filmmakers.

That may seem a strange statement to make given that modern cinema is always an audio-visual experience. Kubrick’s directorial divergence from the past was that rather than relying on speech for the majority of a film’s exposition, he chose music and symbolism. The effect was to make 2001 paradoxically more immediate and more mysterious.

Werner Herzog: five of the best from the director of Aguirre and Fitzcarraldo

We have already suggested ways in which innovations of plot, effects and sound all made startling contributions to the majesty of 2001. It would be remiss not to also pay homage to Geoffrey Unsworth’s spell-binding photography. The tightly controlled environments allowed Unsworth and Kubrick to use lighting that added both lustre and realism.

Many of 2001’s most resplendent scenes are sublime exercises in cinematography. A movie that purports to be about potentially omnipotent beings requires an equally omniscient eye – which Unsworth provided with considerable aplomb.

A common criticism of Kubrick was that he used his cast rather like pawns on a chess board, demanding peculiarly mannered acting from them. With regards to 2001, one could argue that the likes of William Sylvester, Gary Lockwood and Keir Dullea give, at the very least, unusually restrained performances by the standards of the day.

Yet, even in this respect, Kubrick subverts expectations. The emotional core of 2001, rather than a human actor, is a computer – the HAL 9000, voiced by Douglas Rains. In fact, HAL is the star of the film, voicing dialogue in a deceptive monotone that resonates with the viewer in myriad ways. HAL’s lyrical evocation of memory through the singing of Daisy is one of the most emotionally muscular scenes in cinema history.

Few directors then, or now, have been so outlandish as to focus upon automated technology at the expense of people. Fewer still, who have managed to succeeded in doing so dramatically.

2001: A Space Odyssey was thus ground-breaking in all sorts of ways but perhaps nowhere more so than in terms of its philosophy. There were global filmmakers such as Bergman, Tarkovsky, Dreyer and Antonioni (to name but a few) who had already utilised cinema as a means for metaphysical discourse. Nobody had managed to do so, however, within a major studio production in Hollywood!

Concepts of temporality and existentialism are adroitly interwoven within far more broad, more obscure meditations upon who we are and where we may come from (or go to, for that matter). Some of it can feel clumsy now but much more of the film is still sacred territory, even in the more cynical times of 2018.

Moreover, the elliptical conclusion of 2001 is an embodiment of Kubrick’s fascination with questions and scrutiny, rather than concrete and banal assertions. If only more of Science Fiction was similarly respectful of the complexities inherent within our being and place in the expanse of space.

And yet, for all our praise for 2001, no more convincing testimony for its importance can be made beyond the bald fact that we are still talking about it 50 years later. Libraries of books have been written about it, generations of filmgoers continue to see it and it is unlikely to be dislodged from those all-time greatest film lists any time soon.

We can only marvel at the longevity of Kubrick’s masterwork, whose influences are too numerous to do justice to. 2001 lives on primarily as a strange time capsule of an era when blockbuster cinema didn’t require the audience to disengage their brains.

In short, we celebrate 2001: A Space Odyssey because nothing remotely like it has been made since.

It is that scarce commodity in the Arts – an original work.

For that reason, if for no other, it is worthy of its exalted position in cinematic history.