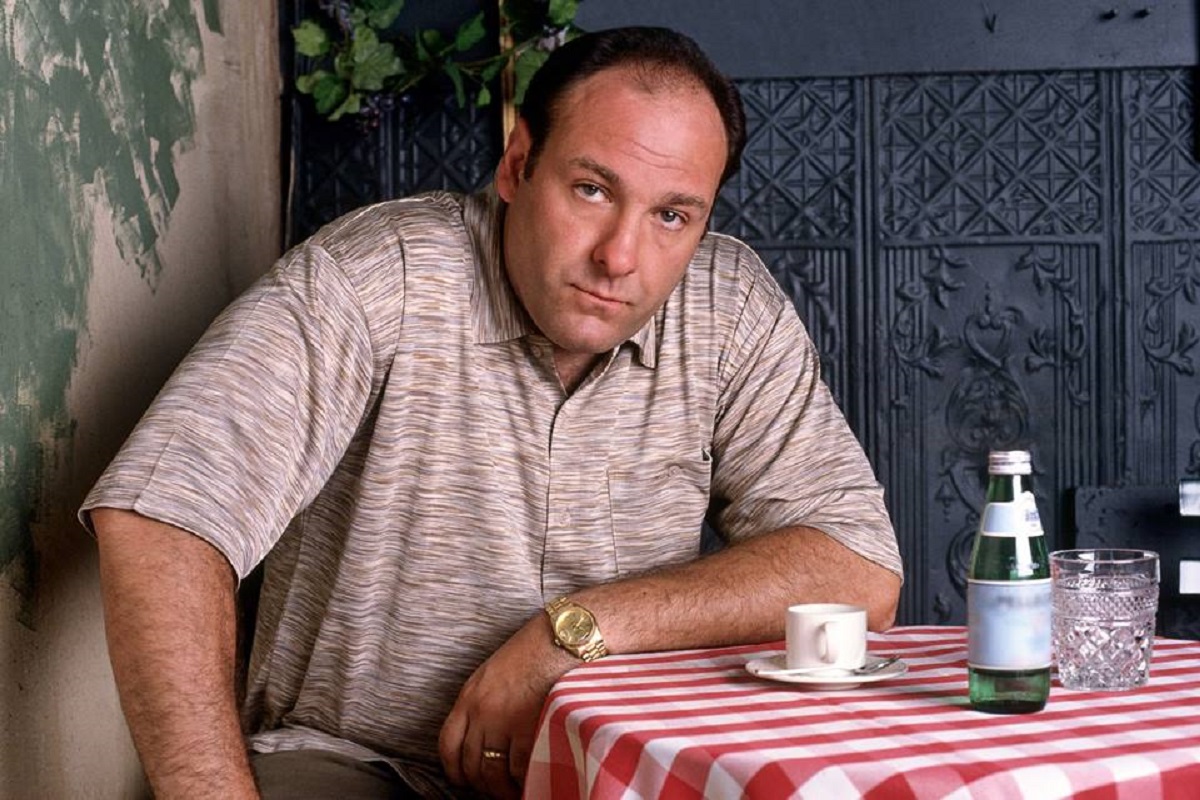 The Sopranos turns twenty this week and Getintothis’ Janaya Pickett weighs in on how HBO’s magnus opus and its iconic main character hold up in 2018.

On January 10, 1999 The Sopranos first aired on American cable network HBO. That’s a quite frankly unbelievable twenty years since it all began and almost twelve years since the show ended in 2007.

Having recently re-watched the entire series, this serendipitous turn of events seemed the perfect excuse to write a reflection.

It’s been said many times before yet truly bears repeating that The Sopranos was groundbreaking television. It was part of a wave of shows known critically as ‘the golden age’ that arrived alongside DVD boxset culture; Shows with longevity, depth and complex characters.

TV pre ‘golden era’, for most of the 90s, had seemed like an endless reel of sitcoms and cheesy dramas.

To a casual observer The Sopranos could read like a cheesy drama also. The mob serialised for TV on the surface sounds clichéd but it is so much more than that. Its cultural relevance has been celebrated by many.

As early as 2001, for example, New York’s Museum of Modern Art honoured the cultural impact of the show with a screening event hosted by its senior film curator.

It focused on the new dialogue The Sopranos had helped open up between TV and cinema. It was the first time a television show had received such acclaim from the art world.

If you’ve never watched The Sopranos and would like to do so spoiler free then do not read this article. You have been warned.

The gangster film as a sub-genre has typically been used in American cinema to explore the dark side of US culture. They’re often critiques of corruption and greed and the horrors that go along with it.

The Sopranos not only expresses this idea but takes it further. It captures the zeitgeist of a pre-post 9/11 America and the scepticism of a changing world.

In the pilot episode it’s explained that mobster Tony Soprano has started therapy sessions under Dr. Jennifer Melfi, as the result of severe panic attacks and depression.

This storyline in itself was new ground for television which had not yet really delved into the world of modern psychotherapy.

Even more so, the critique/focus on modern masculinity and mental health was also unchartered territory.

It is this psychoanalytic approach to Tony that humanises him in a way the likes of Michael Corleone (The Godfather trilogy, 1974-90) and Henry Hill (Goodfellas, 1990) are not.

He is arguably one of the first and greatest anti-heroes of the modern television era: a violent criminal with sociopathic tendencies that we come to know intimately.

We feel for Tony when we see him bed-ridden by depression or exploring his traumatic childhood with Melfi in his therapy sessions.

We empathise with him in his scenes with his mother, Livia, and the endless effect her neurosis has had on his metal health (not least the fact that she tries to have him killed).

Livia Soprano, as interpreted so majestically by the late Nancy Marchand, is a force that looms large over the entire story.

Yet, as previously mentioned, Tony is also a violent sociopath. His behaviour, and the world he inhabits, seem even more problematic when re-watching from a 2018 perspective.

HBO’s Westworld – a threat to cinema or the Emperor’s new clothes?

There is the blatant sexism: the boxes that Tony and others like him place the women in their lives. There is also flagrant racism, most prominent in Tony‘s episodes with daughter Meadow’s boyfriend Noah Tannenbaum (of black and Jewish descent) but which is present throughout.

The female characters in The Sopranos and their relationships with the men around them were also food for thought, on re-watching.

On the one hand there are the many nameless strippers and sex workers in one of its central locations, the Bada Bing club. These women are objects whose nakedness is so common that by the third series it tends not to even register.

It is only in one episode, University, that the private lives of these women are really explored. The episode focuses on twenty-one year old stripper Tracee Winter and her tragic end at the hands of psychotic boyfriend/predator Ralphie Cifaretto.

In stark contrast, the other storyline in this episode centres on twenty-one year old Meadow Soprano and her more normal sexual experiences, with her boyfriend at her privileged college dorms.

Through Tony‘s eyes we get to explore the different paths open to both young women and how he himself influences these.

Yet athough the portrayal of Tracee the stripper is a sympathetic one, by today’s standards, it does little to challenge preconceptions of the occupation.

Tracee is a tragic, one dimensional and disposable character. Although Tony is upset over her untimely death (and we’re with him all the way when he beats Ralphie for killing her) it’s interesting to note that what pushes him to eventually whack Ralphie is not his disgusting treatment of women but his suspicions that he killed his beloved racehorse Pie-O-My.

On the other hand there is arguably a strong female influence throughout the show. It is through the feminine perspective of Melfi that we are allowed to view Tony as a lost little boy rather than a heartless gangster. Melfi’s fascination and relationship with Tony are central to how we, as the audience, also view him.

From Season One we stand with Melfi as she strives with morbid fascination to help cure Tony of his depression. We’re drawn in as their relationship blossoms and she brings out genuine warmth in his character.

But by the end of the series we’re with her also in the realisation that what she’s actually engaged in is damage control. Then sympathetic in Season Six when she eventually decides to stop treating him.

For all of its mafioso macho bullshit The Sopranos would not be what it is without the legendary performance of Edie Falco as Mrs Carmela Soprano.

Though not exactly a representative of liberal feminism, through Carmela‘s story The Sopranos dealt with women’s issues and Italian-American gender roles in a way that few shows had before.

There is Carmela‘s continued quest for independence, especially financially, outside of the marital home. There is also the exploration of her sexuality and sexual dissatisfaction within her marriage.

Carmela Soprano is no trophy mobster wife but a fully realised character that at times shows more strength than her male counterparts. 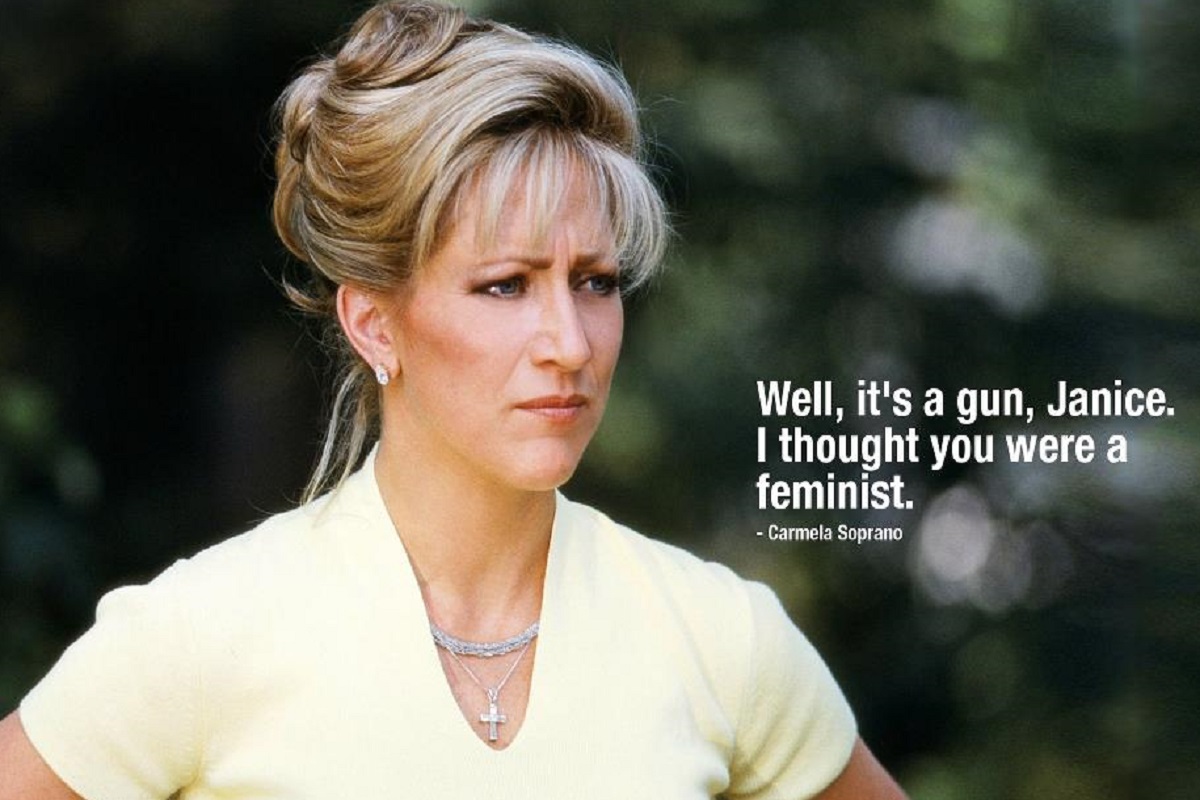 Janice Soprano, Tony‘s sister, is another fascinating female character whose scheming and manipulative qualities often out does many a wise guy.

I found new respect for Meadow Soprano. The only daughter of Tony and Carmela, Meadow is doted on by her Daddy. Indeed Tony‘s relationship with his daughter could be a study in and of itself.

Yet Meadow is perhaps the most stable member of the Soprano family and arguably the only one to survive her father’s destructive influence.

As the show progresses we see her evolve from spoilt teenager to an intelligent and independent woman with a strong sense of morality.

The show seems to be aware of this dichotomy in Tony‘s relationships with women. For example, many scenes involving Tony and Meadow will end cutting to shots of topless dancers at the Bing – as if to constantly remind us not only how Tony pigeonholes women but society more generally.

Tony‘s worldview is particularly interesting from a 2018 perspective. His Italian-American heritage is a theme that runs throughout the show and his strong sense of identity is integral to it capturing the mood of the times.

An interesting Vanity Fair article from November 2018 deemed The Sopranos “prophetic” in this sense. Writer James Walcott goes on to explain that “The Sopranos shows how we got to where we are now, a country stewing in its own stale juices”.

It is true that the show captures a largely white postwar generation approaching forty, obsessively nostalgic and in fear of decline.

Tony himself states from the outset that he feels he ‘came in at the end‘ and by this, he means the end of history, the end of the great American Empire and its capitalist opportunism.

Throughout the series Tony laments the good old days of honour and tradition – as if there were ever such a thing.

Walcott makes a point when he says that Tony‘s attitude in The Sopranos is “MAGA in its democracy, Trumpiness on training wheels“.

It’s not a stretch, for example, to imagine that Donald Trump‘s campaign to Make America Great Again would appeal to Tony Soprano and his crew, who, in one episode violently counter protest a Native American protest of Christopher Columbus Day.

Indeed both Trump and Soprano are villainous, despotic characters who would probably find things in common.

Although in the beginning we are put in the position of understanding and rooting for Tony, we eventually come to terms with his destructiveness and lose faith in him as a character.

Not only does his occupation keep him from progressing in his therapy but more importantly his twisted perspective and pathological behaviours he’s developed over years. Behaviours that however far-fetched they may seem, are ones we can all relate to.

The abrupt fade-to-black of The Sopranos final episode generated much controversy and opinion. The lack of clarity at the end of the show has left many wondering what happened to Tony.

‘There’s only two ways it ends for a guy like me‘, he repeats throughout the series and these two possible endings, death or prison, are a constant source of intrigue and paranoia.

In my opinion, Tony did meet his end in the final episode, portrayed as character Bobby Baccalieri describes it a few episodes earlier. They are in a boat, fishing on a lake during the tranquil scene. Musing on the nature of death Bobby says “At the end, you probably don’t hear anything, everything just goes black“.

Recently music writer Simon Price tweeted that he too had re-watched The Sopranos and heralded its status as more than TV but a modern work of art. And we’re inclined to agree.

Just finished The Sopranos (again), and remain unshaken from my view that it's the greatest work of art created by humans in the 21st centu#dontstopbelieving #madeinamerica

It changed the landscape by mixing influences from film to give television a cinematic quality rarely attempted before.

In its eighty-five hour-long instalments its capacity for storytelling and character development was unprecedented, more in keeping with a novel.

The Sopranos use of music too was also boundary pushing, opting to soundtrack episodes with strategically placed pop anthems rather than the more common original score.

Its use of Journey‘s Don’t Stop Believing in the final episode, and subsequent reimagining in TV show Glee, dragged the 80s stadium rock staple into the 00s – when it appeared to blare endlessly out of bars all across the western world.

More than a cool mob show, The Sopranos is an epic tale of its time but in the same instance explores timeless aspects of the human condition.

It is an exploration into the human psyche and a record of cultural shifts happening at the turn of the 21st century. It’s a body of work that has resonated with millions of people and continues to inspire debate.

The richness of The Sopranos is staggering and re-watching only emphasises its continued relevance.